Today Central Pa Racing Scene is happy to share with you all an exclusive Q&A with up and coming 358 driver CJ Quirk. CJ jumped into the 358 sprint car division in 2014 and will be running for the 2015 rookie of the year in the Central PA 358 Point Series presented by Capitol Renegade as well as at both Williams Grove Speedway. Quirk while being young already has over 100 wins in his career which has ranged from Go Carts, to Lengends, so it will be only a matter of time before this kid will be standing in victory lane at our local short tracks. 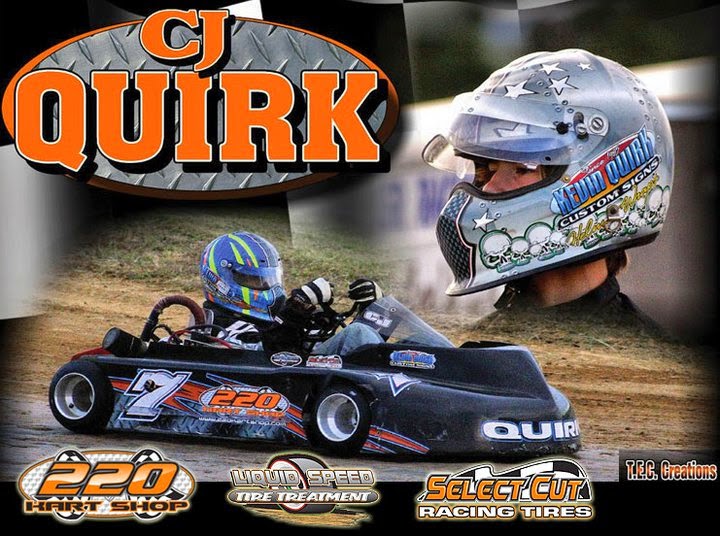 Central PA Racing Scene - How did you get your start in racing?
CJ Quirk - My dad and I always went to sprint car races when I was a kid. I wanted to race something and I didn't care what it was. So when I was 7 we went to the silver spring flea market in 2005 and he bought my first go kart.

Central PA Racing Scene - You've had a very accomplished career in go carts. How fast did success come to you?
CJ Quirk - Not as fast as I wanted it too. I only won 2 races in my first year out. But my second year I won 23 races and won 2 track championships, one at Hunterstown and the other at Shippensburg 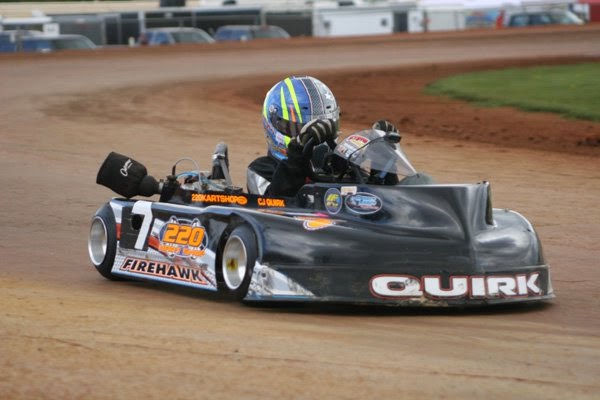 Central PA Racing Scene - Did you & your father have any help getting started or was it a case of learning as you went along?
CJ Quirk - Shawn Lyter from Als kart supply helped us and so did James Kirby from Kirby speed secrets. I'm sure there was more but it was so long ago and I was so young that it's hard to remember. Haha

Central PA Racing Scene - How long did you race carts & how much success did you ultimately have?
CJ Quirk - I raced karts up until 2013 but I raced on and off in 2014 along with the legend car and sprint car. In karts I have a total of 126 feature wins, many pole awards that I will have to get a number for you later, four track championships, 4 PA state championships, 2 runner up Pa state championships, and won the Daytona dirt world championships 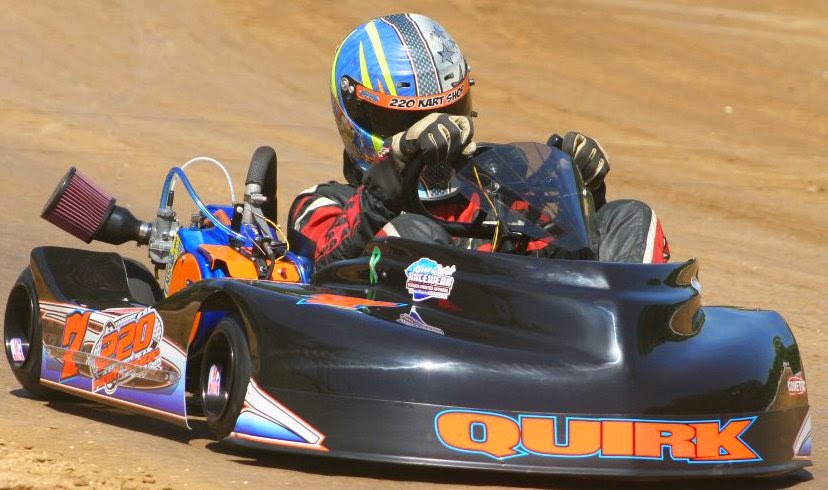 Central PA Racing Scene - So at 15 your winning one of the biggest cart races in the country?
CJ Quirk - Yes sir. It was a huge confidence booster for me. I was coming off an eventful year with a team change and chassis change. I also won a state championship that year in the Jr class, so it was one of my prime seasons.

Central PA Racing Scene - So after all that success you made the jump to the legends division. How did you decide that was the next logical step for your career?
CJ Quirk - Kart racing was becoming very expensive for us and we looked to move up to try and save some money. Sounds backwards but that was our intentions. The legends division seemed like a division with low expenses but still compete at a competitive level. We were hoping to get out in front of new people and see if we could get any new opportunities.

Central PA Racing Scene -So how did it go?
CJ Quirk - We ran great. It was a series rule that you had to start in the back the first three races. In our third race at Susky I started in the back and finished sixth. Then our next race at trail ways I started 15th and made a mistake going for second taking out a heavy hitter in the series. I crossed the line 2nd but they penalized me five spots giving me seventh. Then my sixth race I got my first legend win. 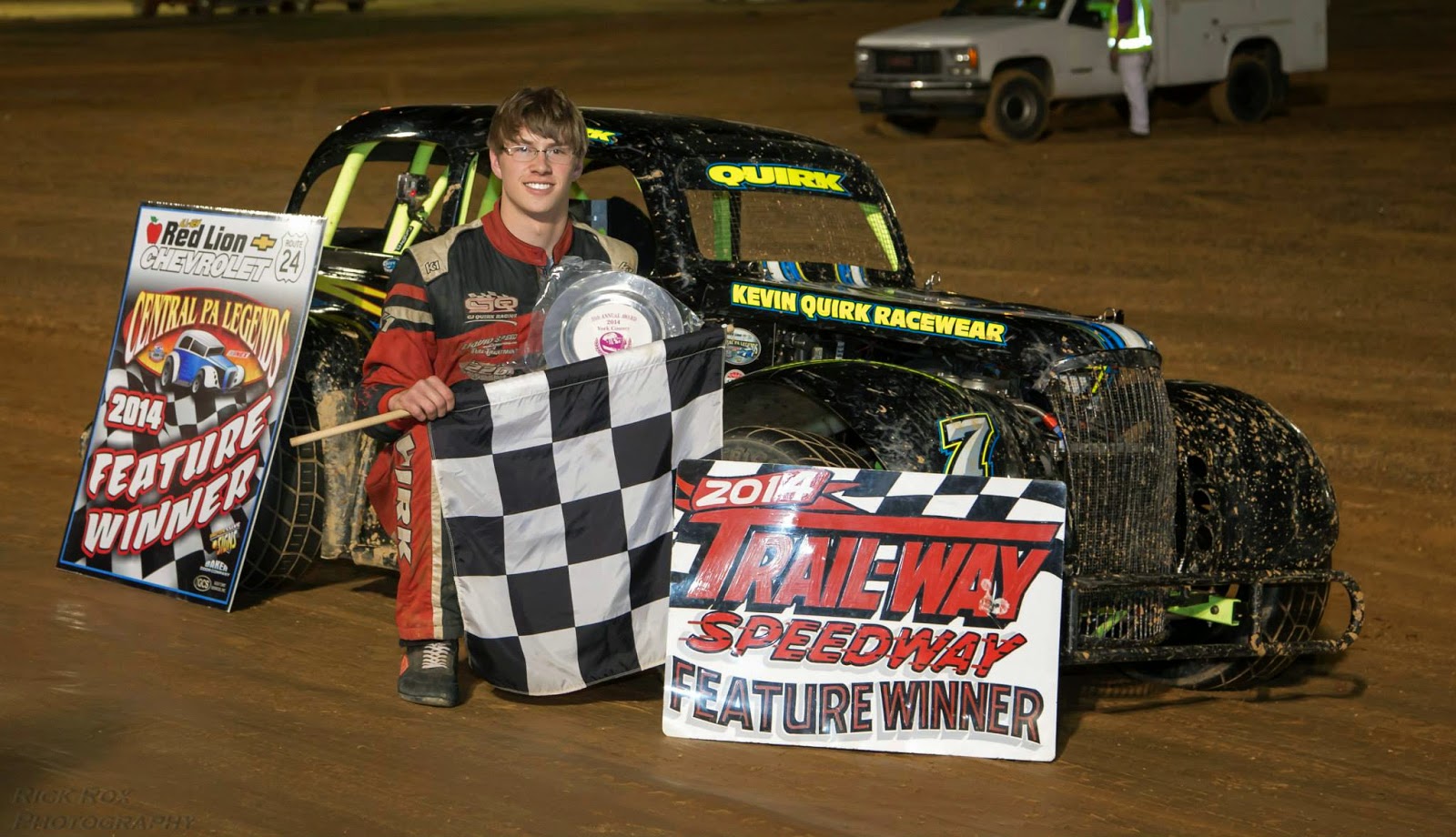 Central PA Racing Scene - How long did you race in the division and how much success did you end up having?
CJ Quirk -  I ran about a total of 9 races I think. We ran into some mechanical problems and had to get them fixed so we were out for awhile. That's when we bought the the sprint car.

Central PA Racing Scene - You mentioned at the beginning that you & your father went to the races together. Where did you go & who where your favorites?
CJ Quirk - We went to mostly Williams Grove I would have to say some of my favorites were Dewease then later Lucas Wolfe. 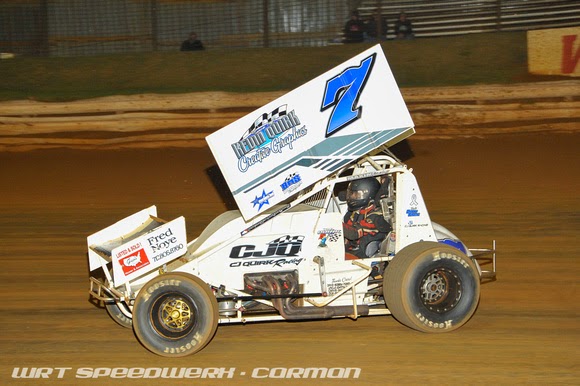 Central PA Racing Scene -You made your debut this season in the 358 division. How hard was it to go from legends to the open wheel 358?
CJ Quirk - Not hard at all, it was a no brainer for me. Haha

Central PA Racing Scene - Why's that?
CJ Quirk - I was racing too aggressive which they did not like at all. Even though I didn't think it was that aggressive at all. Plus I just got bored on trying to figure out what to do with the car to make it faster since the rules were so tight in what you can and can't do. I had a lot of fun times with some of the other racers but it just wasn't for me. It was very hard for me to move out of karts into the legend though.

Central PA Racing Scene -Was that because you had so much success in carts or something else?
CJ Quirk - I just enjoyed everything about karts. I loved the way they drove, the competition level was extremely high, the kart racing society was great to be around. I can't really but my finger on why I like karts so much. It's kind of like how Kasey Kahne owns a sprint car team. He is up in NASCAR but he still wants to be apart of sprint cars. That's the closest thing I can relate to why I like kart racing. 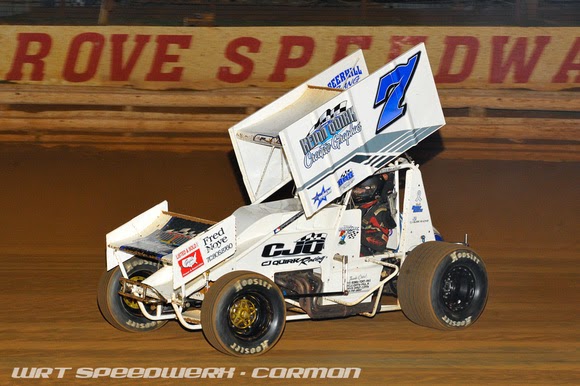 Central PA Racing Scene - Going back to the 358s, what kind of expectations did you guys have starting out this summer?
CJ Quirk - I just wanted to finish in the top 10 every time we went out and if we could do that then it would have been a successful handful of races to me. My dad just wanted me to keep it in one piece and it would be a successful handful of races to him. I managed to keep it in one piece but only had two top tens. So I know we have some work to do over the winter.

Central PA Racing Scene -With 2015 being your first full season in the 358s and the success you've had what kind of expectations do you have compared to what your father has.
CJ Quirk - My expectations are to get a few wins and I think that's what he wants too. With the changes we are making in our program I think it is very likely that we have a chance at getting some wins next year. I learned a lot last year and so did my crew. We can only grow from here. 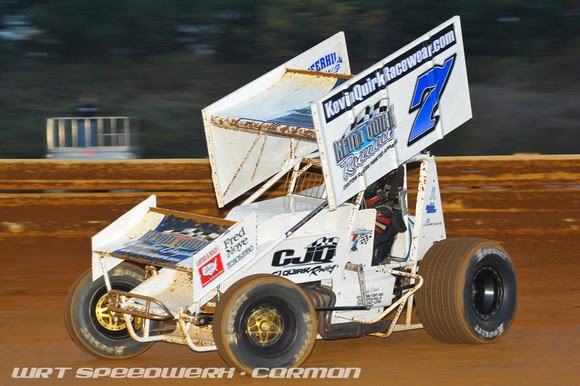 Central PA Racing Scene -What are your plans for 2015?
CJ Quirk - We plan to run Williams grove and Lincoln as of now. With Williams grove's small schedule with the 358s, we may have a few appearances at trail ways as well

Central PA Racing Scene -Central PA Racing Scene - Who all helps you as far as sponsors on your car?
CJ Quirk - Right now all the sponsors I have is Christine Kennedy with Jack Gaughen Hower and associates. My dad pays for everything else, Kevin Quirk race wear and Kevin Quirk creative graphics. My crew has bought some miscellaneous stuff for me. My uncle John Quirk, Brian Hamilton, Dave Hess, Rick Schaffer, and Bob Bupp. Todd Berkheimer and Danny Rhome have helped us along with Paul White jr as well 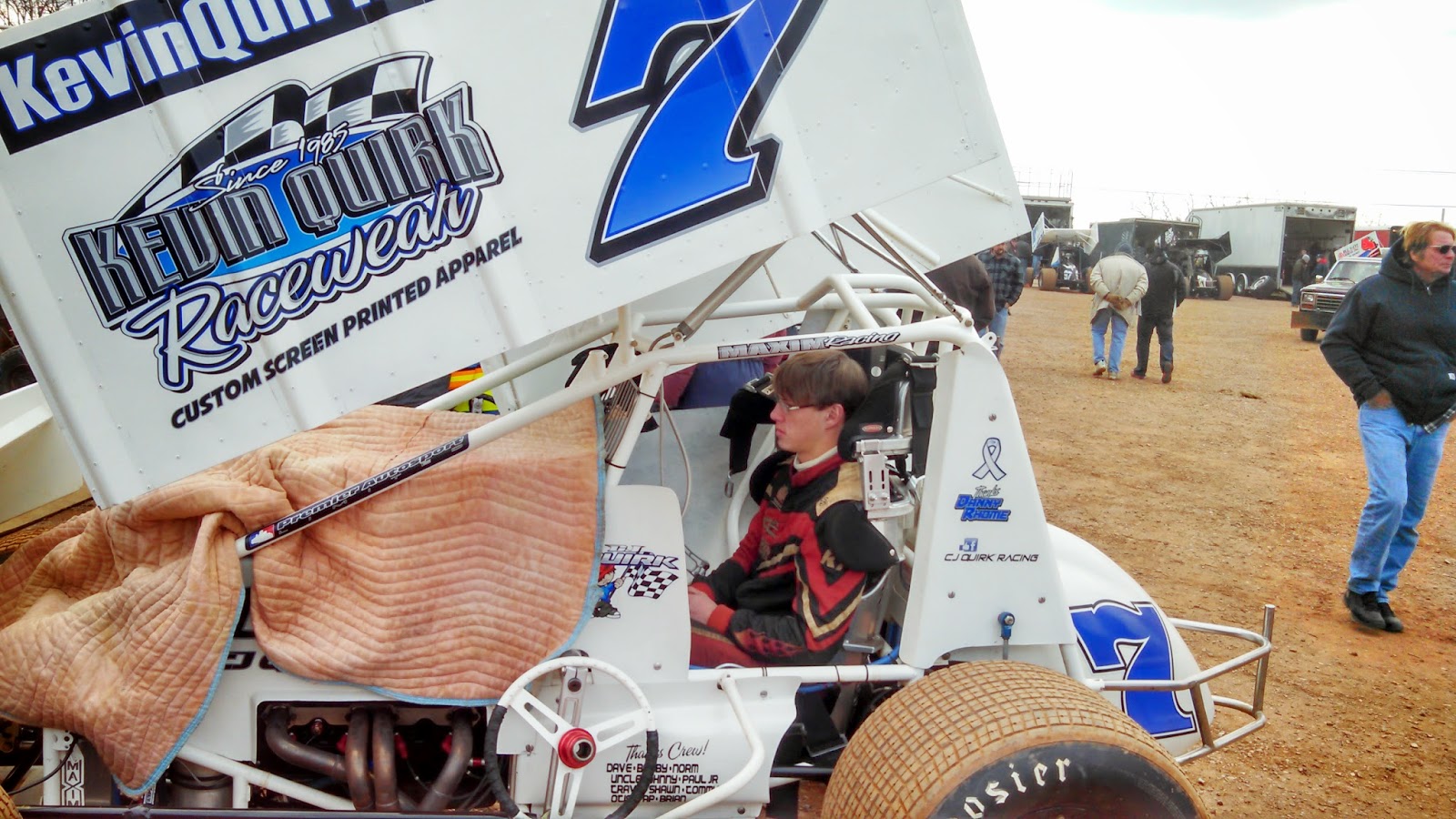 Central PA Racing Scene - Favorite driver to race against & why
CJ Quirk -Ryan Montgomery and Spencer Davis were my favorite racers to run against. Haven't ran against them in years though. They were always fast and would run you hard but never dirty.

Central PA Racing Scene - Anything else you would like to say to the race fans?
CJ Quirk - Thanks to everyone that has supported me!

Thank you to CJ Quirk for taking the time to chat with us. This kid will be one to watch in the up coming 2015 racing season because if history has shown with CJ it will not be long till he is standing in Victory Lane at either Williams Grove or Lincoln Speedway.