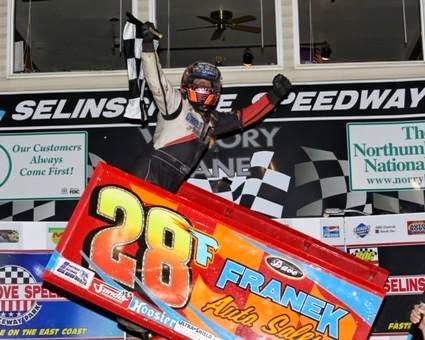 Franek and Stutts see-sawed for the lead for the last 10 laps of the race with Franek taking his first checkered flag of the season in the Franek Auto Sales No. 28F.  The $2,000 victory was Franek’s ninth career at the track.

"I hope you fans enjoyed that!” said Franek in Victory Lane. “It was exciting from my seat!”

Jeff Rine of Danville made it two wins in a row in the 25-lap super late model feature. The victory marked the 93rd of Rine’s career at the track.

Nathan Long of Selinsgrove made a last-lap, final-turn pass by Kyle Bachman of Selinsgrove for his first win of the season in the 15-lap pro stock feature, while Bob Bussey of Northumberland wired the field for his win in the 12-lap roadrunner race.

Second-place starter Davie Franek and polesitter Troy Betts dueled for the lead at the start of the sprint car feature. Franek edged out Betts for the lead at the completion of the first lap, when the caution flag waved for a double spin involving Larry Kelleher and Brad Franks in turn four.

On the restart, Franek maintained the lead with fifth-place starter TJ Stutts making a breathtaking move against the guardrail in turn four to drive by both Betts and fourth-place starter Jason Shultz for the second spot! On a lap five restart, 11th-place starter Mark Smith powered into the top five.

At the halfway point, Stutts closed in on Franek in what would turn into a suspenseful race for the lead and win. Slider after slider through the turns, Franek would reclaim the lead from Stutts. While Stutts put his car in front of Franek’s at different times on the track he was never scored as the leader of the race at the start-finish line.

Racing off turn four for the checkered flag, Franek held off Stutts’ last-ditch effort to steal the win. Franek was victorious by just .59 of a second over Stutts, Smith, Betts, and 10th-place starter Colby Womer.


Jeff Rine started on the pole and edged out second-place starter Matt Cochran for the lead at the drop of the green flag in the late model feature. Rine blistered the speedway at the front of the pack while fourth-place starter Steve Campbell kept him in his sights.


A caution flag for Hayes Mattern regroup the field on lap five. When the race resumed, Rine distanced himself from the rest of the field with Campbell trailing in second. A torrid battle for the third spot unfolded between fifth-place starter Kenny Trevitz, third-place starter Dave Zona, and Cochran.
At the checkered flag, Rine posted a convincing seven-second margin of victory over Campbell, Cochran, Trevitz, and Jim Yoder.
Derrick Garman pulled into the early lead from his pole starting position and led the first lap of the pro stock feature. On the second circuit, third-place starter Kyle Bachman made an inside pass in turn one to take command of the field.

With five laps remaining, fifth-place starter Nathan Long stormed into the runner up position. Long quickly reeled in Bachman in a race for the lead. On the 11th lap, the caution flag unfurled when Tommy Slanker’s car fell off the pace.

When the race resumed, Long pressured Bachman for the lead. On the final lap, exiting the final turn, Long pulled off the winning pass using the inside line. Long’s margin over victory was a mere .28 of a second over Bachman, Andrew Shoop, AJ Stroup, and Matt Hornberger.

Polesitter Bob Bussey wired the field for his win the roadrunner race. During the first half of the race, fourth-place starter John Fowler Jr. trailed Bussey until fifth-place starter Dustin Snook took over the runner-up position.