Well another weekend of racing here in Central PA has come and almost gone (Bedford still has a race tonight) and I'll be damned if not a single race was lost to mother nature this weekend, and the only controversy happened at the start of the feature at Port Royal Speedway. What a glorious weekend!!!!

Friday night saw Stevie Smith win in his 1st start for Fred Rahmer in the 51s machine. I picked him as the 410 driver of the year in Central PA in 2014 and looks to me like he is going to pick right back up where he and the team stopped. If that 51s pulls into the pits the rest of the race teams better be on their A game for sure. Interesting fact is with the win Stevie is now just 2 wins behind his father Steve Smith the Original Black Bandit on the all time win list. Congrats Stevie on a great win in the Hinnershitz Memorial Friday night. 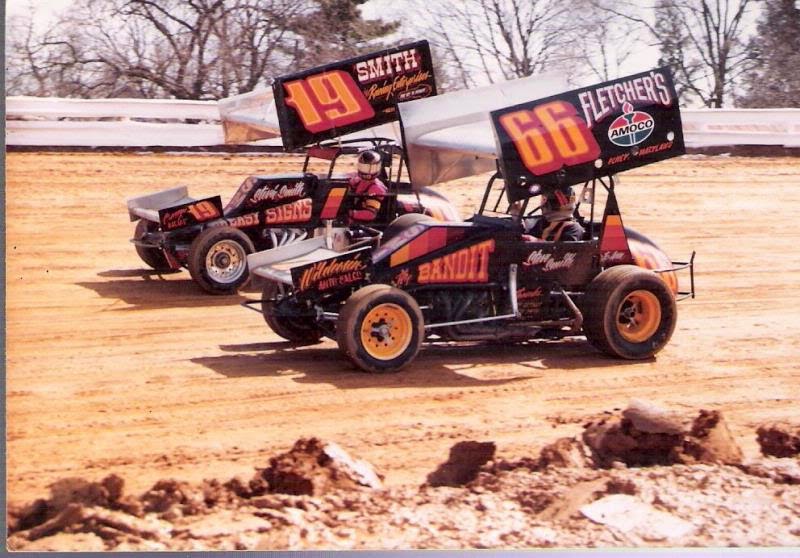 From reports Brent Marks looked to be on his way to the $6,000 win when he got together with a lapped car and took out not only himself but the cars of Danny Dietrich and Dave Blaney. Shame for Brent as he has been fast and very consistent (6 top 5's so far in 2015) he's just still trying to find his way to VL. But remember folks he had a horrible start to 2014 and once he found VL for the first time he reeled of a lot of wins. Might just see a repeat once he finds it for the 1st time.

Down at Trail Way Speedway Isaac Sneeringer went back to back in the 25 lap 358 feature event. Sneeringer started 11th in the feature and looked to be racing for 2nd until 2014 track champion Brad McClelland blew a motor and dropped for race. Brad's bad luck was Isaac's good luck as he motored around the high side of the speedway to claim his 9th career feature win.  Issac told me Saturday that the win "Definitely a confidence booster. Winning one is hard enough, but when you have to come from the back to win those are the races that you don't forget. Being that our race team is mostly family, its just special to share with them.  We just go out every week and do the best that we can. The team works hard every week, and I can't thank them enough for all that they do. Hard work pays off- it's not just about showing up at the track every week." I asked him if he has been flying under the radar a little bit with most of the fans in Central PA and his response was "Yeah but it's easy to un noticed because there is a lot of talented drivers in our area. I just want to go out, be competitive and win races!" That kid is not only a good dude but one hell of a race car driver. Better keep that name in the back of your mind because he will be one to watch in the future.

Saturday night brought us the best racing weather we have seen in Central PA all year. Warm sunny skies welcomed the drivers and race teams to EVERY speedway. 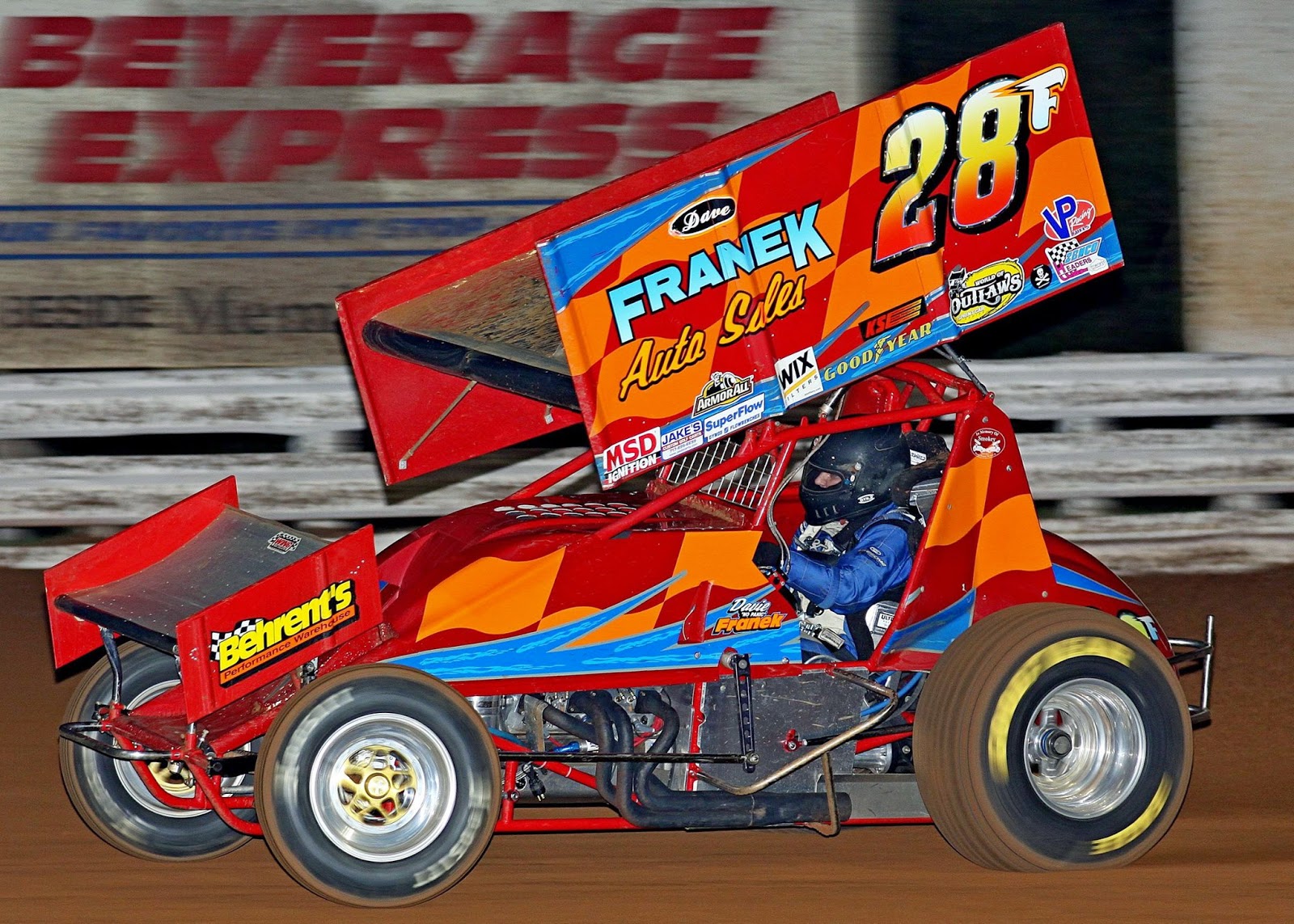 Lets start at Selinsgrove Speedway where 21 cars strong ( awesome news to hear) showed up for a regular night of racing action at the East Coast fastest half mile. Defending (yeah I know different URC ) Champion "No Panic ' Davie Franek took home the win over TJ Stutts and 2014 track champion Mark Smith. Congrats to Davie and the team on a great victory. BTW Davie I still owe ya for the deer stakes.

At Port Royal they had their tune up for the Bob Weikert Memorial All Star race next weekend and Lucas Wolf picked up his 2nd career feature win at the track in the legendary Zemco car. Wolf would get the win after Port penalized both Danny Dietrich and Greg Hodnett "jumped" the start of the 25 lap feature. Dietrich's tweet summed up his feelings on the call... 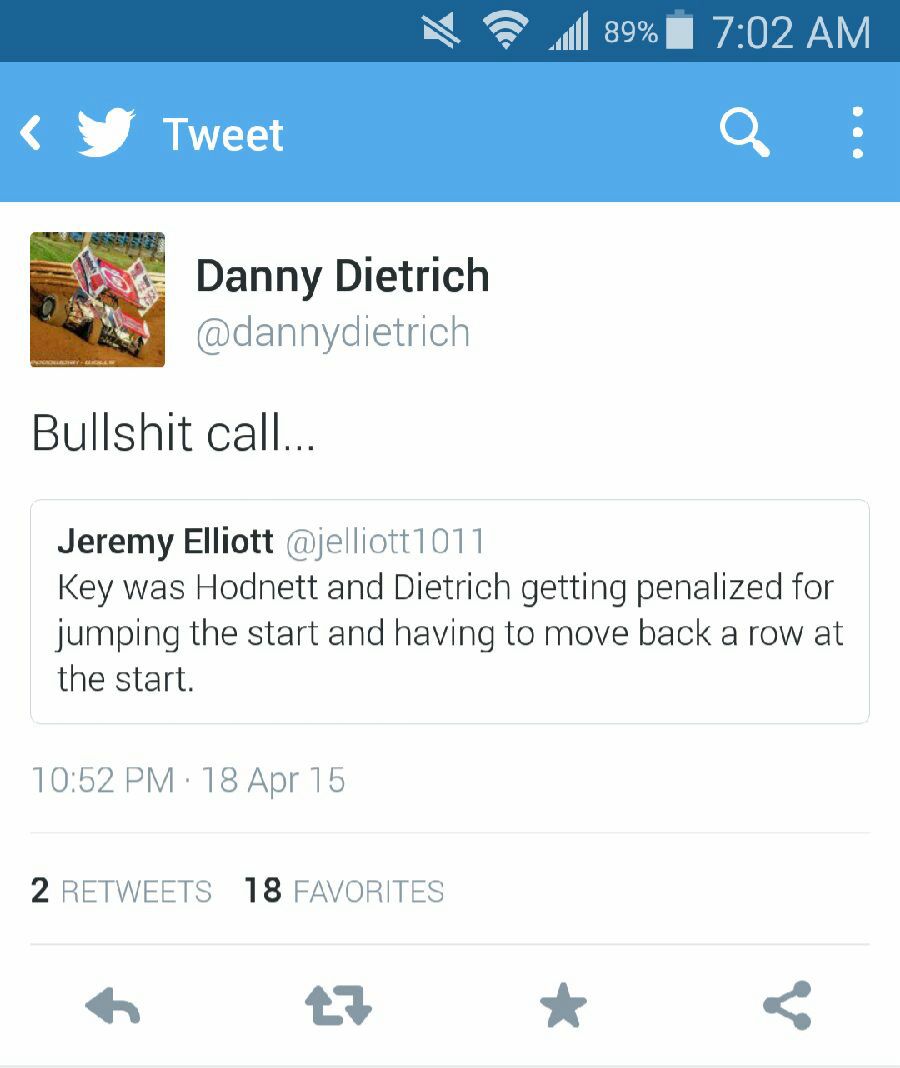 Gotta love the honesty of Danny Dietrich...... Lucas has been bad fast in the early season. with the win he now has 1 win/4 top 5's/ and a top 10 to his credit. Better watch out for him when the big money is on the line.

Down at Lincoln Speedway Glenndon Forsythe picked up his 3rd career 410 feature win in another instant classic for the 410 division. The top 4 consisting of Forsythe, Austin Hogue, Mike Bittinger, and Alan Krimes ran 24 laps under a blanket in heavy lapped traffic. Hogue would take lead for a few laps only to loose it back to the pole sitter who would never give it back. The only caution of the night flew as the top 4 where heading into turns 3 and 4 for the final time, which kind of killed what would have been an awesome drag race back to the finish line. That race right there should be watched for anyone who says handicapping needs to go.....but more on that in a bit.

Doug Hammaker would get passed a very game Ashley Cappetta and go on to score his 2nd career victory at Lincoln in the 358 feature event. Cappetta had a tire go flat after this happened at the beginning of the 20 lap feature 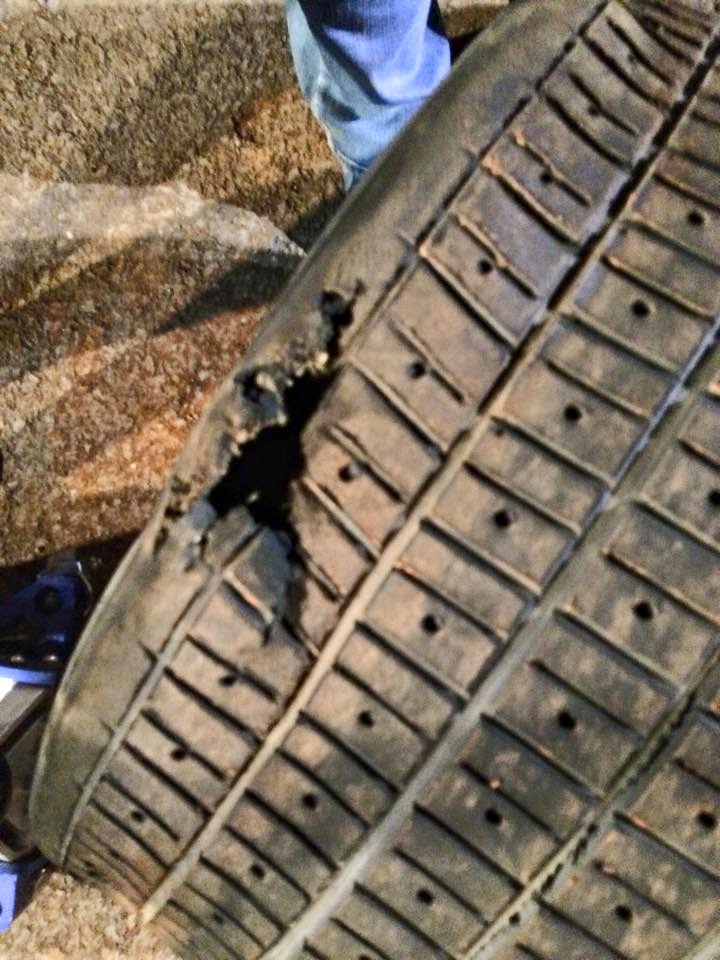 Ashely has shown marked improvement in the first 2 races at Lincoln, being fast and steady on the wheel in her 89 race car. If she has any luck on her side she will be standing in Victory Lane in the very near feature.

Hammaker who told me Friday night that the team is making a run at the Central PA 358 Point Series presented by Capitol Renegade championship is showing that he has what it takes to win it. Remember folks who his father is, that man has many years in the 358 division, and Doug has shown since finally getting that breakthrough win last season, that he is ready and capable of winning it.

Now last night we had two races at two different race tracks, run under two different sets of rules, have the exact same results, yet I'm going to tell ya 1 was way better then the other and try to explain why. Lucas Wolf and Glenndon Forsythe both won their respective 410 features from the pole position. I'm here to tell ya Forsythe's win was a way better race. Yeah I can hear you all saying....Well how the hell does that make any sense? They both started in the exact same spot and won. Well to paraphrase (and for the record I spelled that right the 1st time YEA ME) these 2 guys.... 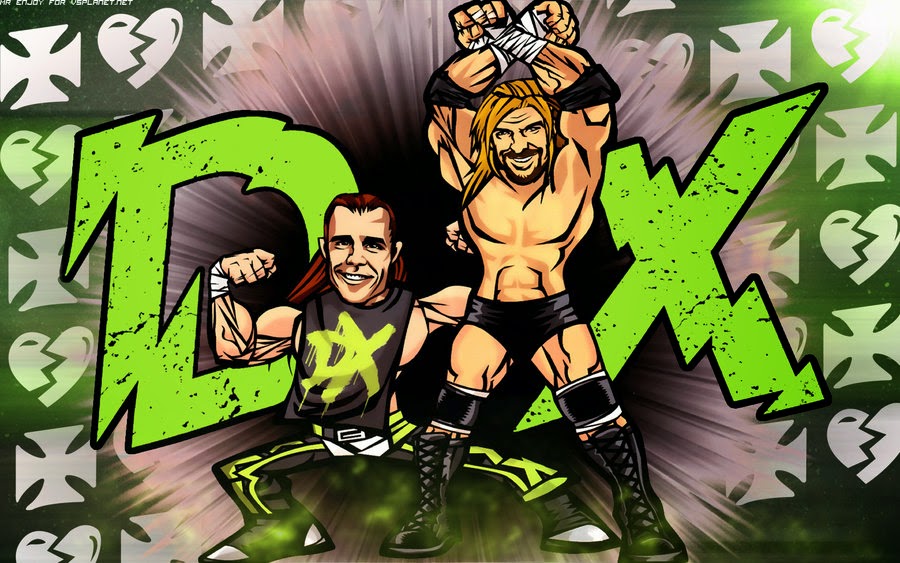 I got 1 WORD FOR YA!!!!! HANDICAPPING!!!!. The race last night at Lincoln Speedway might have been won from the pole position but we saw a dirty word here in sprint car world....PASSING. We saw 6th starting Austin Hogue and 9th starting Alan Krimes make their way through the field on a rather dry race track I might add, and put one hell of a show on for the fans. Now I'm not trying to take anything away from Lucas and his win at Port Royal but watching the 3 of the top 5 starters finish where they started and have the biggest thing from that race be the bad start, well in the words of Lucas himself...That is probably the easiest pass of Greg Hodnett you are ever going to get." that sort of speaks for itself. Kind of handed the win before the race even got started. Not down at Lincoln this week. Forsythe might have started on the pole but he worked his arse off the win that race, and in the process gave the fans an exciting race.

We watched TWO underdog race teams battle it out with the Defending track champion, and the National 410 Rookie of the Year, and both of them held their own for 25 laps. Thats what makes handicapping so great. You give those underdog teams a shot at having the race of their life in some cases (first time winners folks) and beating the race teams who should win most of the time. It's not starting the best and most funded race teams in the front 3 rows and watching them run away with the race like Montieth did 2 weeks ago at Lincoln. But hey this is just my opinion, I'm sure we all have a different look at this, lord knows there has been plenty said about it already, hell Danny Dietrich flip flopped his opinion from last year when he said he wished we ran TT's every week (Yeah Dietrich I still remember you calling me out on Twitter that day), so if a race team like Danny;s change their mind, why can't others?

Well that's all for this week. Thanks again to everyone who checked out the site, and take the time to read my long ramblings every Sunday morning here on Central PA Racing Scene. As always feel free to hit me up with your thoughts on anything I ever say on here. You can hit me up on Twitter   leave me a comment in the comment section, or do it the old fashion way and send me an Email . Until next weekend hope your work week goes as fast as the race cars we enjoy watching do. See you all next week at the race track.