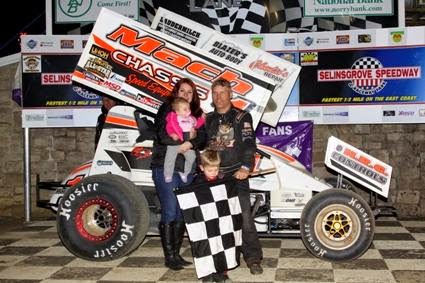 SELINSGROVE, Pa. – Mark Smith of Sunbury started Saturday night’s 25-lap 360 sprint car feature at Selinsgrove Speedway in the 10th position and made a late-race pass by Jason Shultz of Carlisle for his second win of the season at the Snyder County oval.

Dave Zona of Montrose held off a last-ditch effort by two-time winner Jeff Rine of Danville for his first win of the season in the 25-lap super late model feature.

Andrew Shoop of Mifflintown won his second race of the year in the 15-lap pro stock feature, while John Fowler Jr. of Montandon scored his first win of the season in the 12-lap roadrunner race.

Selinsgrove Speedway will present the 35th annual Jack Gunn Memorial for 360 sprint cars sanctioned by the United Racing Club at 7 p.m. Saturday, May 2. The 30-lap tribute race will pay $3,500 to win and will include time trials as part of the qualifying format. The super late models and pro stocks will also be on the racing card. Track gates will open at 5 p.m.

In the final laps of the race, Smith caught Shultz in traffic and made the winning pass using the inside lane in turn one on the 20th circuit. Smith stretched his lead as Stutts began to pressure Shultz for the runner-up position. At the checkered flag, Smith was victorious by a mere second over Stutts, Shultz, 15th-place starter Chuck Hebing, and 12th-place starter Davie Franek.


Polesitter Chad Hollenbeck powered into the lead at the start of the late model feature. Hollenbeck was trailed by second-place starter Meade Hahn for the first two laps before third-place starter Dave Zona took over the runner-up position.

With nine laps to race, Rine advanced to second and began to reel in Zona in traffic. Dylan Yoder, who started 13th, horsepowered his way into the third spot with five laps remaining. On the final circuit, Zona took the high line around lapped traffic and edged out Rine by just .28 of a second for the victory. D. Yoder, Hardy, and Cochran completed the top five.
Polesitter Matt Hornberger led the first lap of the pro stock feature until fourth-place starter Andrew Shoop made the winning pass in turn two on the second circuit. On the sixth circuit, third-place starter AJ Stroup advanced to second and set his sights on the leader. Despite several caution flags, Shoop kept his racer out in front of the pack and posted a .67 of a second margin of victory over Stroup, Nathan Long, Matt Hornberger, and Kyle Bachman.

Front row starter Ricky Buss escaped injury when his roadrunner went into a series of barrel rolls on the backstretch at the start of the main event. When the race resumed, third-place starter John Fowler Jr. pulled into the lead and held off fifth-place starter and last week’s winner Bob Bussey by .24 of a second for the victory. Dustin Snook, Jeremy Kline, and Brandon Shultz completed the top five.