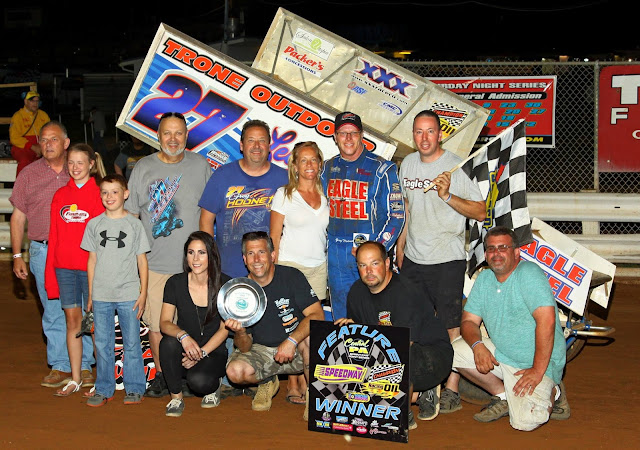 Mechanicsburg –Greg Hodnett scored an exciting sprint car feature on Friday night at Williams Grove Speedway, stealing the lead from Cory Haas with just over a lap to go to record his second victory of the year at the track.

In other action, Chase Dietz became the fourth different winner in as many races this season in the 358 sprint division.

As the point leader, Hodnett of Spring Grove started 10th in the 410 sprint field as second starter Glenndon Forsythe paced the field.

Fourth starter Austin Hogue drove into second at the with Cory Haas racing third before the races only caution flag unfurled on the seventh tour for a slowing Danny Dietrich.

Haas put Hogue back a spot when action resumed while Hodnett disposed of Wolfe.

And then on the 10th tour Forsythe’s motor began souring in the lead, allowing Haas to motor by for control with 13 away.

But by that time Hodnett was on the move and was directly behind Haas with 11th starter Brian Montieth having picked up the to take over third.

Moments after taking the lead, Haas found himself challenged by Hodnett with a move in the first corner but Haas jetted off of the cushion to maintain the pace with 11 laps to go.

Haas stepped it up a bit at that point and pulled out of striking distance for the next eight circuits or so before Hodnett again began striking for the lead with four laps to go.

Aboard the Heffner No. 27 sprinter, Hodnett dropped off of the cushion in the third and fourth turns to slice into Haas’ advantage while following him on the cushion through turns one and two.

But as Hodnett’s flexed his muscles low, a surging Wolfe, now back up to third, was able to up on Hodnett to make it a three car race for the win with three laps to go.

Hodnett was finally able to make his third and fourth turn strategy work as the pair raced toward the white flag and although Haas tried to come back in the first corner, his time at the front was over.

Following Haas across the line was Wolfe, Montieth and Hogue.

Heats went to Montieth and Hodnett. 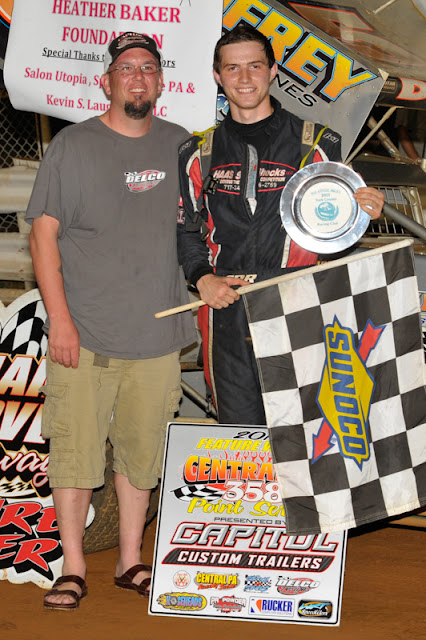 Third starter Ryan Kissinger drove into the lead, around Jordan Givler and Todd Reed, on the first lap of the 20-lap 385 sprint feature.

The race was red flagged with three laps when Amy Ott jumped the fourth turn cushion and turned over.

With five down Dietz was up to second but Kissinger proved to be a formidable foe on the cushion, holding off Dietz’s advances until after the halfway point.

Dietz was finally able to make a low move in the first corner work with seven laps to go before cruising uncontested to his second victory at the oval.

Adrian Shaffer motored into second with four laps to go but failed to challenge for the win.