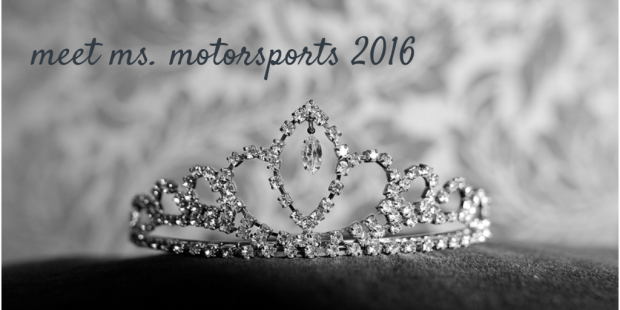 By CATHERINE HOGUE
Arynne Moody is no stranger to a pretty, sparkling tiara. However, she recently donned a new crown when she was announced as Ms. Motorsports 2016.
Moody, of East Berlin, PA, was crowned on January 23, 2016, the second day of the PPB Motorsports Race Car & Trade Show Presented by Insinger Sunoco.
This was Moody’s third time competing in the pageant. She was a previous contestant in 2011 and 2012 but took a three-year hiatus after moving to Pittsburgh. After moving back to the York area, Moody decided she would give the competition another go.
“Several people asked me why I hadn’t run the last few years and suggested that I do the pageant again because they know my love and knowledge of racing and thought I would be a great representative for the sport,” Moody said.

The 30-year-old adds this tiara to a shelf of numerous other titles, including Ms. Dirt Trackin in 2010, which required her to travel throughout Pennsylvania, New Jersey and Ohio to represent dirt track racing. In 2011 she held two titles: Ms. Race 2 a Cure and Ms. TSRS. As Ms. Race 2 a Cure she traveled to local tracks representing the organization to help raise money for those fighting breast cancer. Her duties as Ms. TSRS involved representing the traveling group of 305 Sprint Cars in eastern Pennslvania, Delaware, and New Jersey. Lastly, in 2012 she was crowned as Ms. PA Posse Racing and tasked with representing the local 410 Sprint Car drivers.
Moody has been involved with the sport of racing since she was young. Growing up, her father worked on the 358 Sprint Car of Bill Case Jr. She attended her first race at Susquehanna Speedway at the ripe age of one-year-old.

Her father eventually purchased his own 358 Sprint, traveling with a group called KARS throughout the late 1990s and early 2000s. “I always wanted to be in the garage helping,” Moody recalls. “He [her father] nicknamed me Gear Girl because my favorite task was to change the gears in the car. He joked that if he lost me at a race track, I was probably somewhere in the pits changing gears for someone else.”

Moody has been involved in racing ever since and currently helps work on her boyfriend, Jordan Givler’s 358 Sprint Car. “I still love being in the shop, getting dirty and greasy,” she said.

“I WANT TO SHARE MY PASSION AND LOVE FOR THIS SPORT WITH AS MANY PEOPLE AS I CAN THIS YEAR.” –ARYNNE MOODY

Preparation for this year’s pageant began months prior with shopping for outfits and then making sure she could walk comfortably in them and in heels. She also brainstormed possible interview questions and even admitted that she would drive to work, talking to herself, asking and answering those questions.
Although she loves to talk, Moody said that the interview portion of the competition was the most intimidating for her. “I am not afraid to talk,” she said. “I am also very confident in my racing knowledge, so those things weren’t the issue. I was just nervous that I might be blindsided by a question, be asked something that I hadn’t prepared for and be caught off guard.”


However, her worries were unwarranted as she would be awarded best interview, which she acknowledged as her best personal category as well. And although the competition was tough, it was ultimately Moody’s year.

“I initially could not believe it and figured I heard wrong,” she said of hearing her name called as the winner. “Then I started shaking” – which she also attributes to not eating all day in anticipation of the swimwear portion – “then I became very excited thinking about the amazing year I would have ahead of me.”

And her reign as Ms. Motorsports 2016 has already begun with the NAPA Know How Racing Weekend inside Atlantic City’s Boardwalk Hall for the Len Sammons Motorsports Productions Indoor auto races the last weekend of January.
“That was a blast,” Moody said. “That was the first indoor race I have ever been to and I was so surprised. I was surprised by the speed and the excitement. I was also overwhelmed by the support provided to me there by the entire Area Auto Racing News staff. They are an amazing group of people.”

Next on her schedule are the indoor races in Trenton the final weekend of February. At this point in time she is still unsure how many events she will make an appearance at throughout the course of the season but said she hopes to make a lot as she usually attends between 40-50 races a year. “I am looking forward to my first trip to Knoxville and going to the World Finals in Charlotte the most,” she said.

And the duties of Ms. Motorsports, you may ask? It’s not just to sit around in a tiara and sash and look pretty, although she certainly has no trouble looking the part. “First and foremost, I will be a representative of AARN and an ambassador to the sport of racing,” Moody explained. “I will serve as a role model to young fans and help grow the sport I love. I will be able to assist tracks, promoters, and sponsors with anything they may need on race day.”

In addition to working full-time as a physical therapist, spending time with her family, friends, and boyfriend, training for her third full marathon in Pittsburgh this May, reading, drawing, and watching the Eagles (which we’ll forgive her for) and Phillies, Moody also sings and can perform the National Anthem for any tracks that have the need.

But Moody also has bigger goals for 2016, and they’re aimed toward the younger generation racing fans.
“I have a nine-year-old sister who I took to Williams Grove last year and by the time the heats were over, she began to lose interest, and I think that’s an issue for other kids as well,” she said.

Perhaps an issue that not many have considered before, but Moody hopes to get kids more involved in the sport by starting a coloring contest at the tracks she will visit that will hopefully hold their attention longer into the racing event. She would like to begin gathering sponsors to provide prizes for the winners of the contests, which could possibly be announced just before the features begin so that kids have something to look forward to throughout the night. Moody also hopes to get involved with the RAACE organization this year, a non-profit group whose mission is to raise awareness of the all-too-silent subject of child sexual abuse.

Moody is excited to work toward her goals this season as Ms. Motorsports and said it means the world to her to hold this title. She hopes to use her newly-acquired tiara and sash to spread her love of racing to a greater audience, and her desire to do so is pretty evident.

“I want to share my passion and love for this sport with as many people as I can this year,” she said. “One thing that was always there for me to look forward to was racing. I say sometimes that it saved my life. I truly love getting dirty and greasy and the smells of dirt, methanol, burning rubber, and gear oil. I’d honestly hate to know where my life would have gone had I not grown up at the race track!”
Posted by Bill McIntyre at Sunday, February 21, 2016