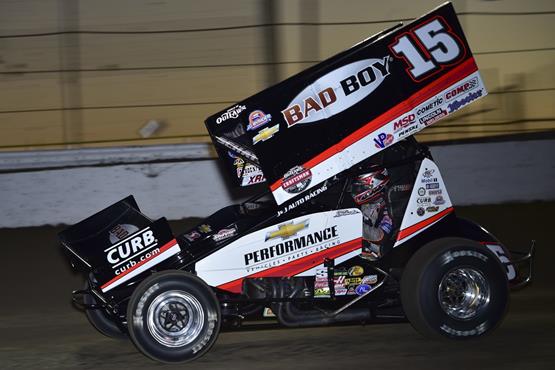 BARBERVILLE, Florida (February 11, 2016) - Donny Schatz surpassed his Wednesday night performance by one position on Thursday evening, mastering the Volusia Speedway Park half-mile en route to a $5,000, Arctic Cat All Star Circuit of Champions victory. Schatz, who charged from the fifth row to secure his position in victory lane, increased his Arctic Cat All Star win total to 12 on his career. The Fargo, North Dakota, native cruised to the final checkers by a near four second lead. Dale Blaney and Jason Johnson rounded out the podium finishers.

“This is an incredible race team” Donny Schatz said, “I didn’t want to have to call the boss tonight and tell him I left something on the table. Just an incredible effort by these guys.”

Danny Lasoski and Jason Johnson led the 24 feature starters to green at Volusia Speedway Park. Lasoski controlled the opening lap before losing the top spot to Johnson. The “Ragin’ Cajun” made his way to the top-side of the speedway, eventually extending his lead over Danny Lasoski and Dale Blaney. Traffic would soon come into play, but a lap ten caution would bring the field to a stop for the first and only time. Paul McMahan made contact with the turn one wall; he would walk away unharmed.

Johnson brought the field back to life during the lap 10 restart, returning to the point position over Danny Lasoski and Dale Blaney. Donny Schatz, who started tenth on the grid, climbed his way to a top-five position for the first time during the restart. The pilot of the familiar Tony Stewart Racing/No. 15 continued his pursuit toward the front, ultimately capturing the fourth position by lap 13 and the third position by lap 14, utilizing all lanes of the slick, Volusia Speedway Park surface. Schatz continued to waste little time, eventually taking command of the runner-up position over Danny Lasoski on lap 17. It would only take three more green flag circuits before Schatz could diminish Jason Johnson’s charge at the front of the field, taking the top spot officially on lap 20.

“You have to go where everyone else isn’t” Schatz explained, “We were decent, I just had to find my way around. Once we got going, we were pretty good. This race team is incredible for sure. I have the best job in the business.”

Six-time and defending Arctic Cat All Star Circuit of Champions titlist Dale Blaney attempted a late-race charge, but would fall short. The “Low Rider” started fourth on the feature grid and raced inside the top-five during the entire distance. Blaney made his final move of the 30-lap main event on lap 25 when he raced around Jason Johnson for second.

“We’ve been really good all year, really” Blaney explained, “The guys have been working hard. Can’t thank Big Game, Muddy, CH Motorsports enough. I’m not sure if I needed that red. I felt like I couldn’t get going after that. This is a great group of cars racing down here. We’ll take second, come back tomorrow and see if we can do one better.”

With their 2016 Florida campaign officially in the history books, the Arctic Cat All Star Circuit of Champions will now spend the next six weeks preparing for their first points event of the 2016 season. The Arctic Cat All Stars will next invade the Atomic Speedway in Chillicothe, Ohio. The “Rumble in the Hills” program will feature a $5,000 top prize on Saturday evening, April 2; the first visit by the Arctic Cat All Star Circuit of Champions since August 1, 2015. The “Low Rider” Dale Blaney is the most recent Arctic Cat All Star main event winner at the Atomic highbanks, capturing the $10,000 Open Wheel Championship over Ryan Smith and Sheldon Haudenschild. Those who would like to know more about the 2016 “Rumble in the Hills” program on Saturday, April 2, should visit Atomic Speedway live on the Web at www.atomicspeedway.net.

About the Arctic Cat All Star Circuit of Champions:

All Star Enterprises, LLC, wholly owned by Tony Stewart, d/b/a the All Star Circuit of Champions, is a winged sprint car series. The All-Star Circuit of Champions Sprint Car Series is one of the oldest traveling 410 sprint car organizations and is a staple of grassroots, open-wheel racing. Formed in 1970 by Bud Miller, the series has largely been considered the first 'outlaw' Sprint Car organization of the modern era. After a 10 year stint as owner of the All Stars, Miller passed control of the series to Bert Emick in 1980; a reign that would continue through 2002. Guy Webb then purchased the series from Emick in the summer of 2002 and served as the series President for the next 12 years. Motorsports entrepreneur Tony Stewart agreed to terms with Guy Webb to become the sole owner of the original winged sprint car tour in January of 2015.

The Arctic Cat brand is among the most widely recognized and respected in the recreational vehicle industry. The company designs, engineers, manufactures and markets all-terrain vehicles (ATVs), side-by-sides and snowmobiles, in addition to related parts, garments and accessories under the Arctic Cat® and Motorfist® brand names. Arctic Cat Inc.’s world headquarters is located in Minneapolis, Minnesota. Its common stock is traded on the NASDAQ Global Select Market under the ticker symbol “ACAT.” More information about Arctic Cat and its products is available at www.ArcticCat.com.