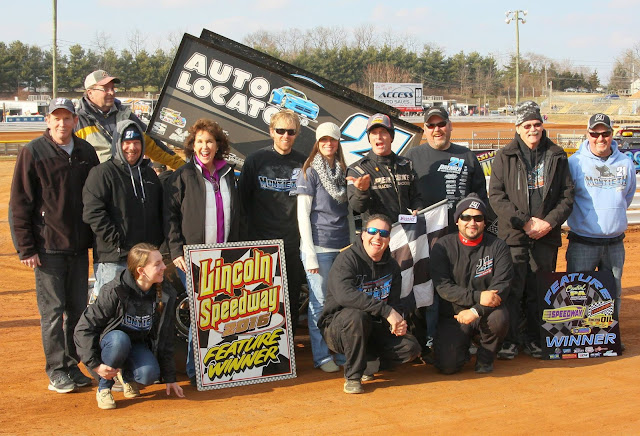 It was the second straight week that Lincoln Speedway officials utilized a Sunday rain date, both in which Sunday was the better day for early season racing.

Most figured the race was won during the redraw for the feature and Montieth admitted he won the lottery.

“We won the lottery today, we started on the front row,” the Phoenixville driver stated after earning the $3,200 payday for the Jerry Parrish owned race team. “That was pretty much the deal today. I’ll be glad when we go night racing because the dirty air with these new wicker bills and stuff, it’s a mess. So I can’t wait for nights.”

Alan Krimes and Montieth led the field to the green flag as Montieth gained the edge exiting the fourth turn to lead the first lap.

Montieth’s Auto Locator No. 21 caught the rear of the field by the fifth lap as Krimes closed the gap and the two were actually side by side at the line on both laps eight and nine.

Adam Wilt got by opening day winner Greg Hodnett for third with 10 laps complete but Hodnett put an outside move on Wilt a lap later to regain the spot.

Hodnett got around Krimes for the runner-up spot on lap 17 and quickly ran down Montieth, who again, was working through traffic.

“I shut my eyes and I came out of it,’ joked Montieth about the late race incident. “It was close. It was a lot closer than I wanted it to be.”

With an open track following the yellow, Montieth was home free as he drove away to capture his 51st career win in the Pigeon Hills and first of 2016.

“You can’t ever count Greg out,” he added. “That’s why when I was back in lapped traffic, I figured I’ll just drive around and hope for a caution. Everything fell into place for us tonight and that’s why we’re here.”

Heats for the 26 410 Sprints were won by Freddie Rahmer, Billy Dietrich and Glenndon Forsythe. Mark Smith won the consolation.
Lincoln Speedway returns to action Saturday, March 12 with another 410 Sprints only program beginning at 2PM. There will be an open practice for other divisions following the feature event. Sunday, March 13 rain date will be used if needed.