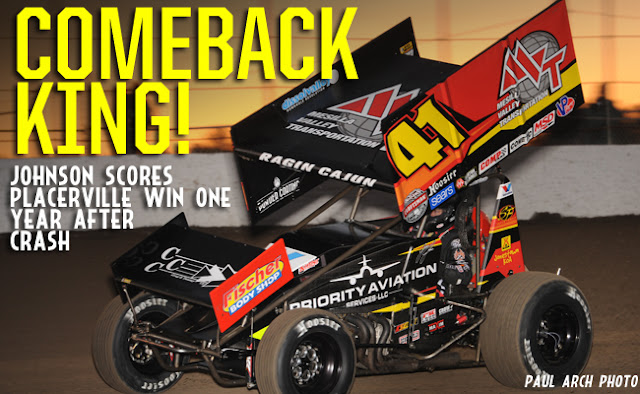 Captures win one year after serious accident at same event

PLACERVILLE, Calif. — March 23, 2016 — After being involved in a crash during this event last year that sidelined him for part of the season, Jason Johnson returned to Placerville Speedway for the 2nd Annual Brad Sweet presents the Placerville Short Track Outlaw Showdown presented by Riebes Auto Parts on Wednesday night and captured his first World of Outlaws Craftsman Sprint Car Series victory since Texas Motor Speedway in 2003.

Daryn Pittman, who was also injured in the same event last year, finished second to Johnson, as both drivers overcame their troubles from a year ago for podium finishes.

“We have a tremendously strong team right now, and things are clicking, and when they are clicking it is fun,” Johnson said. “Daryn [Pittman] and I were standing there in the dash and I was like ‘man I would be happy just walking out of here tonight’ and then we finish one and two.

“This was a place I really wanted to redeem myself. It’s really cool we are able to come to a small track like this and be able to race and I really got to thank Brad Sweet and thank all the fans for coming out, it’s been a great night.”

Johnson, a Eunice, La. –native, showed speed early in the night, clocking in with the second fastest time, just behind quick-time recipient Sean Becker, who is a native of Chico, Calif.

Johnson then piloted his Priority Aviation/Masilla Valley Transportation No. 41 to a victory in his heat, defeating Auburn, Calif. driver Andy Forsberg, which qualified him for the dash.

Coming short of sweeping all the races during the night, Johnson finished fourth in the dash, as Pittman, in the Great Clips/Sage Fruit No. 9, captured the victory in the 8-lap race after he overtook Forsberg on the opening lap.

Pittman, starting in the first position, lost the top spot once the green flag fell, to second place starter Forsberg, who regained the position Pittman took from him in the dash on the opening lap.

Johnson charged from his fourth starting position early, quickly making his way to the second position just behind Forsberg, after he passed Pittman on lap four.

Johnson reeled in Forsberg and started battling with the driver of the PitStopUSA/Autism Awareness No. 7C. The back-and-forth duel for the top position lasted 10 laps, with Johnson finally overtaking Forsberg on lap 14.

As the leaders hit slower lapped traffic, Johnson padded his lead on the rest of the field, but a caution near the halfway point brought both Forsberg and Pittman to his rear bumper.

On the ensuing restart, Johnson pulled away again as Forsberg lost a position to both Pittman and race promoter Sweet, who cracked the top three for the first time all night.

Sweet’s time in the top three was short lived as another local California driver, Kyle Hirst from Paradise, Calif., rocketed from his 10th starting position to the top three with less than 15 laps remaining.

Much like Sweet, Hirst’s time in the top three was short lived as he blew a tire causing a late race restart with only five laps remaining.

Unfortunately, the caution for Hirst was not the final caution of the night.

Just before the leaders took the white flag, Joey Saldana brought out the final caution, setting up a green-white-checkered finish between Johnson, Pittman and Sweet, who had reclaimed his podium position.

On the final restart, Sweet slipped off the track allowing Forsberg around him for the third position.

At the front, Pittman could not muscle his way around Johnson, who proved to be too fast for the rest of the field as he dominated the majority of the race, leading 26 laps en route to claiming the victory at Placerville.

“I had no clue [how fast we were],” Johnson said. “But I knew if we were racing with Andy [Forsberg] then we were pretty good, because I watch a lot of video, and Andy’s pretty good at this type of racing.

“It’s all about pacing yourself. You watch Donny Schatz pace himself, his fastest laps come at the end of the race so at the beginning of the race I paced myself and shopped around, then I got the and tried not to make mistakes.”

“You couldn’t have scripted a better finish than that one tonight,” Pittman said. “Starting on the pole you want to win but for [Jason Johnson] to come back and win and me to finish second...It was a lot of fun to come back to a racetrack that we both had a bad night, and both got hurt, and come back and run strong.

“Our goals weren’t too high coming in here tonight. My goal was to see more of the track than I did from the Placerville hospital, so luckily we achieved that and finished second. But congrats to Jason [Johnson], he has definitely been fast this year. He has probably been the most improved and they’re in the hunt every night, so it was a great win for that team, and a good run for us.”

Forsberg brought home a third place finish after being one of the fastest cars all night and contending for the victory early in the feature.

“We were all working today until about noon so we were able to come out here today and run with the Outlaws – these guys are pros,” Forsberg said. “Am I a little disappointed I didn’t win? Of course...We’ve been here twice and been in contention twice, so I don’t know what else to say, other than I am happy to be in third place.

“It sure broke my heart to see Brad [Sweet] drive off the track and let me by him, it was definitely nice of him.”

The World of Outlaws Craftsman® Sprint Car Series head home for the Easter weekend before hitting the road again for the Ocean Outlaw Showdown presented by Budweiser at Ocean Speedway in Watsonville, Calif. on Friday April 1.