Schatz Rebounds for Victory at Stockton 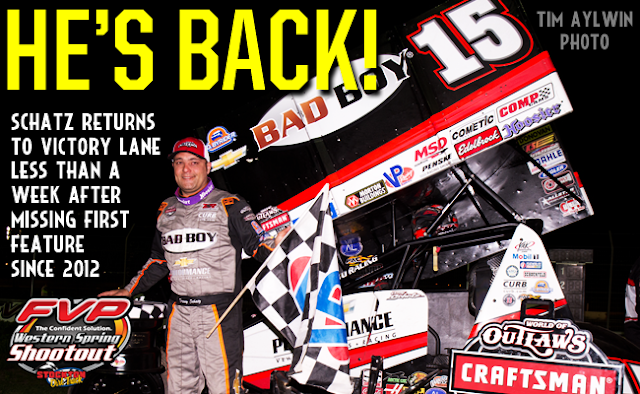 Returns to victory lane less than a week after missing feature

Schatz picked up his third victory of the season, which is his first win since winning on the second night at The Dirt Track at Las Vegas on March 4. Schatz’s third win ties him with current point’s leader Brad Sweet with most victories of the season.

“This race team is incredible. I guess that’s why they work for Tony Stewart - an incredible boss and person,” Schatz said. “[Stewart] understands that things like that happen when the stars line up, and the stars lined up [last week at Thunderbowl].

The Fargo, N.D –native showed his speed early in the night, capturing quick time in qualifying, which put him on the pole for heat one.

Schatz, in the Bad Boy/Chevrolet Performance No. 15, finished second in his heat to three-time series champion Sammy Swindell in the Big Game Treestands/GoMuddy.com No. 1, who was fastest in hot laps at the beginning of the afternoon.

Following an invert draw of eight, Brian Brown, driving the FVP/Casey’s General Store No. 21, started the dash from the pole and led flag-to-flag for the victory. With the victory, Brown took the pole position for the 30-lap feature, with Sweet starting to his outside and Schatz starting third.

Once the green flag fell, the caution quickly came back out as local favorite Rico Abreu lost control of his Abreu Vineyards/Alpine Star No. 24, flipping multiple times exiting turn two. Fortunately, Abreu walked away from the wreck, but would not return to action.

Brown, Sweet and Schatz led the field back to green as the three battled side-by-side for the top spot.

Brown settled into the lead but could never pull away from Sweet and Schatz, even as the two battled for the runner-up position, which Schatz eventually took control of just before the halfway point of the feature.

After he secured the second position, Schatz quickly reeled in the leader and completed the pass a few laps later. Brown continued to slide back, allowing Sweet and Shane Stewart to get around him, dropping him to the fourth position.

Schatz pulled away from the rest of the field as he approached lapped traffic. The slower traffic allowed Sweet to Stewart to close the gap on the leader but the two contenders could never pounce on the top spot.

Schatz seemed to have the victory in his grasp, eventually building a lead of over a second, but a caution with two laps remaining gave Sweet and Stewart their shot to steal away the victory.

Schatz managed to hold off both challengers on a green-white-checkered finish, as he dominated the second half of the feature and claimed the opening night of the FVP Western Spring Shootout at Stockton Dirt Track.

“Brian [Brown] was a little hesitant getting around lapped cars and I was just trying to make something happen,” Schatz said. “You hate to see those restarts at the end but the Hooiser tires did a great job firing off and doing their job the way they should and that helped us get the win.

“Hats off to my guys. I know after last week they were ready to kill me but that’s how it goes some days. We are here tonight though and we’re going to celebrate the win.”

Sweet continued his dominance of the top five, as he has finished inside the top five in every event this season.

“It was a tricky track,” Sweet, a native of Grass Valley, Calif., said. “I was just riding around on Brian Brown’s right rear early in the race, but Donny [Schatz] kept sticking his nose in there, and I knew I needed to move around and find something.

“Donny was just a touch better, he was able to move around and get through lapped traffic better than us, but we were pretty close. Every time he Razorback Professional Tools car hits the track it’s really close, it’s just a matter of me making the right decisions in lapped traffic and at the start of the race.”

Stewart, who made a motor change just before the dash, continued his streak of podium finishes, as he has now finished inside the top three the last three races.

“We had a little motor issue and thank goodness it held together for that heat race win,” Stewart said. “It’s so crucial to get a first or second to get yourself in the dash.

“We just got to keep working on it. [Donny Schatz] and Brad [Sweet] are going to be tough all year long...The way the format is you got to get qualified and get through your heat race.”

RACE NOTES: Donny Schatz ties Brad Sweet with most wins this season at three...Sweet continues his top five dominance, finishing in the top five in every event so far in 2016...Dominic Scelzi picked up his first hard charger award of the season.