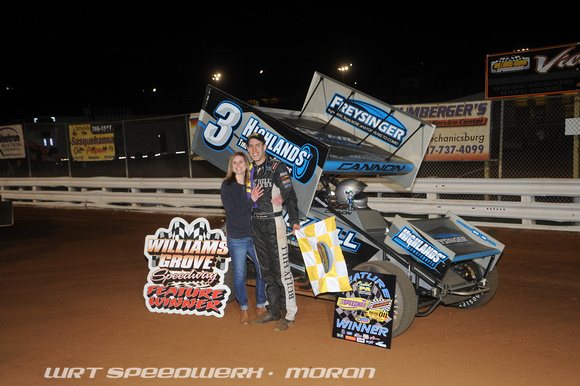 Mechanicsburg – It was a battle of the No. 3’s Friday night at Williams Grove Speedway as Brock Zearfoss and Pat Cannon battled for the sprint car win with Cannon coming out on top for the $3,600 payday.

And in the season debut of the 358 sprints at the track it was Adrian Shaffer taking his third speedway season opener for the division in a row.

Zearfoss started the 25-lap 410 sprint car feature on the pole and led the first lap over Tim Glatfelter before fourth starter Cannon drove into second using the high groove.

Cannon would not abandon his top lane despite the majority of the field racing around the inside of the oval including leader Zearfoss and with nine laps completed the first caution flag appeared with Zearfoss still the leader despite Cannon racing on his bumper for several consecutive laps.

After the yellow for a flat tire on Danny Dietrich’s racer, the restart saw the war on wheels continue with Zearfoss hugging the inside and Cannon slinging his mount around the top side.

Cannon would get better runs around the top in the third and fourth corners but it was the first and second turns where he had to work harder to make time on the leader.

The Etters driver finally put it all together on the 13th tour when he was able to draw even with Zearfoss as the pair exited the second corner before taking command as they shot onto the backchute.

For the next few laps after getting the lead Cannon maintained his outside line but during the final several laps he would move to the bottom to preserve the victory.

A final restart with eight laps to go after a spin by Lucas Wolfe failed to produce any pressure on Cannon for the win.

However as the leader worked traffic as he neared the white flag, some careful moves to make his way around allowed Alan Krimes to get too close for comfort.

Krimes had taken second on the 18th loop and closed right up on Cannon’s bumper as they came to the white flag but that was as close as he would be able to get.

After clearing the backmarker Cannon pulled away on the final lap to get his first win of the year. 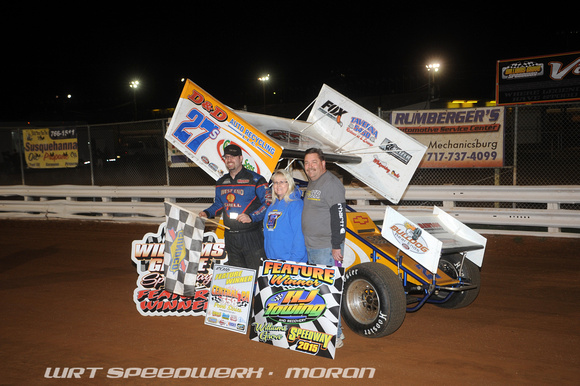 Chris Arnold led from the pole in the 358 sprint main with Matt Campbell giving chase.

However Campbell brought out a yellow flag with eight laps completed when he lost the handle in the fourth corner, placing sixth starter Adrian Shaffer in second for the restart.

Arnold was flawless until two laps to go when he allowed Shaffer an opening as the pair raced off of the second corner.

Arnold seemed to slip during the late stages, allowing Shaffer to get control and drive away.

Doug Hammaker got by Arnold as well during the final mile, relegating Arnold to third for the finish.