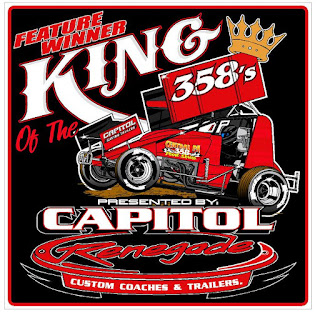 The Capitol Renegade King of the 358's Series kicked off it's first race of the series Sunday night at Susquehanna Speedway and the defending 2015 Central PA 358 Point Series Champion Doug Hammaker would stake his claim to another crown. Hammaker would lead all 20 laps of the feature event to capture the win over 410 invader Glenndon Forsythe, Kevin Nouse, Tyler Esh, and 2016 Central PA 358 Point Series leader Adrian Shaffer.

With $2,000 going to the winner of the 8 race series, Hammaker staked an early claim to take home the check from Capitol Renegade and the crown for being named the King of the division.

The series will kick into high gear in May with the next 3 races in consecutive weeks. May 8th the teams will be back for the 2nd and last visit at the new and improved Susquehanna Speedway, before making the trek to the biggest track of the series the historic Williams Grove Speedway the following Friday night May 13th. Then it will be off to the smallest track in Central PA, Trail Way Speedway for their Spring Championship race which will pay $1,200 to the winner.


Sponsors of the Capitol Renegade King of the 358's Series are

You can keep up to date with the Capitol Renegade King of the 358's Series as well as the Central PA 358 Point Series at www.centralparacing.com
Posted by Bill McIntyre at Tuesday, April 12, 2016