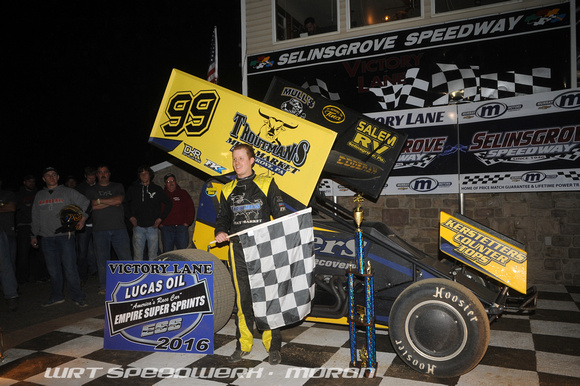 Keller’s fourth career sprint car victory at the wheel of the Keller’s Auto Body No. 99 was worth $2,200 and came over a stellar field of 33 360 sprint cars.

Jeff Rine opened his late model title defense with his 97th career win at the track in the 25-lap super late model feature, while Andrew Shoop of Mifflintown scored his second opening day win in a row in the 15-lap pro stock race.

Next Saturday the speedway will be dark to prepare for the first All Star Sprint Car race at the track in 16 years. The All Start Circuit of Champions Sprint Car series will be in action in a 30-lap A-main paying $5,000 to win for 410 sprint cars at 6 p.m. Sunday, April 24. Track gates will open at 4 p.m.

Front row starters Steve Collins and Cody Keller thrilled the fans trading the race lead on the opening lap of the sprint car feature before a red flag for a wild flip by Jordan Thomas. Thomas was ok and when the race restarted Collins and Keller picked up right where they had left off dueling for the top spot before Keller secured it on lap five.

The race would go through without another stoppage allowing the field to cover the whole speedway with cars. Robbie Stillwagon picked up the runner up spot from Collins as lap nine went onto the scoreboard. While things settled down in the front of the field Mark Smith was working his way from the 15th starting spot into the top five. Although Stillwagon closed in on the leader a few times, Keller began to open up a large lead by halfway at lap 15.

Smith had worked by Justin Barger for third on lap 15 and gave chase of Stillwagon for second. As the race wound down Keller continued to cut through lap traffic and grow his lead over now second spot Mark Smith. Although Smith persisted to charge toward the leader time was up and Cody Keller met the checkered flag for the opening night win which he dedicated to his grandfather who passed away over the offseason. It was Keller's fourth Selinsgrove win.

Jeff Rine used a great start and big move off turn four to power by early race leader Dave Zona while battling with Colby Frye in the Jeff's Auto Body & Recycling Center Super Late Model feature. Once out front Rine drove away from a fierce battle for second between Coleby Frye and Bryan Bernheisel.

Rine was in lap traffic by lap eight while Frye closed the gap for the race lead. A lap 11 restart saw Frye give his best effort for the lead on a restart, but Rine was able to fend him off. The race again heated up for the runner up spot as Steve Campbell challenged Frye and Bernheisel. Once Campbell was able to take second on lap 23 his only hope for a shot at the leader was a yellow. The green flag remained out and Jeff Rine claimed career win number 97 at the speedway in the season opener.

On lap ten the top three closed to run all but nose to tail for the top spot as Shoop maneuvered around some of the lap traffic. Once clear Shoop drove away to the opening night win. The battle for second was settled with a slide job and cross over on the last corner with Slanker taking the spot over Mitch. Kurt Wray and John Troxell rounded out the top five finishers. Matt Hornberger, Nate Stroup, Dan Condo, John Bouse, and Peanut Heintzelman rounded out the top ten. Heat races were won by  Brad Mitch, Tommy Slaker, and Kurt Wray.