Franek is "No Panic" at the 69th United Racing Club Opener 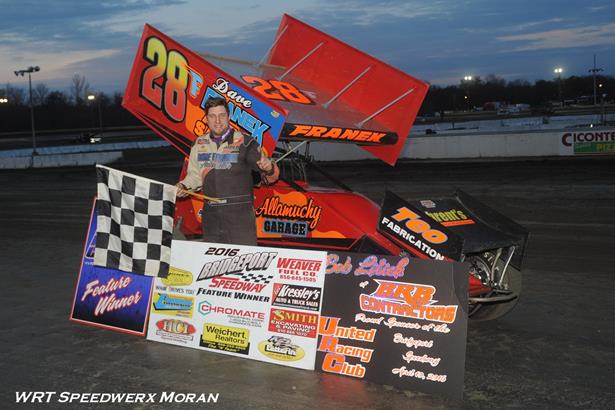 Franek is "No Panic" at the 69th United Racing Club Opener

A field of 22 United Racing Club sprint cars were in the pits on a cold but sunny Sunday afternoon at Bridgeport Speedway. Three heat races were won by the 28f of Davie Franek, 5G of Curt Michael, and the 15 of Mark Bitner. With an invert pill drawn of 3, Mark Bitner brought the 21 car field to the green flag.

Defending and 9 time URC Champion Curt Michael grabbed the lead in the GEI Enterprises, Valley Forge Inc 5g from the drop of the green flag and held the lead until a lap 11 caution flag caused by the spinning Ed Aikin who was making his return to URC in the Scott McClaren owned 21 car. Michael brought the field to the green flag but the lead was quickly wrestled away by the 28f of Franek on lap 12. A lap 23 debris caution in turn 3 bunched up the field again and had all the makings for a dramatic finish. On the restart a 4th place running Josh Weller stopped in turn 2 with front end damage. A 2nd chance at a lap 23 restart gave 2nd place running Curt Michael another chance at the 2014 URC Champion Franek. Entering turn 1 Michael dove low and took the lead from Franek, but Franek wasn't to be denied taking the lead from Michael going down the back stretch once again. Rounding out the top 5 was the 5g of Michael, 89 Quality Auto Body Robbie Stillwaggon, B&G Glass Troy Betts, and the Hook & Ladder Home Improvements of Nate Snyder making his return to URC in the Tim Hogue owned 39.

Amber Allmond has been named the 2016 Miss URC. Look for Amber to be in victory lane at all the races. Rookies, Justin Whittall, Brett Michalski, Ryan Stillwaggon, and Mark Sasso all made the starting field. Stillwaggon faired the best with a 14th place finish. The United Racing Club in conjunction with Bridgeport Speedway made a classy move, forgoing the B-Main and starting all 21 remaining cars.

The United Racing Club will now have a non-points race at Selinsgrove next Saturday night the 16th, and then will head to the "Hard Clay" of Orange County Fair Speedway for the 2nd points night of the 2016 racing season. Photos from tonight's event can be found at www.wrtspeedwerx.com