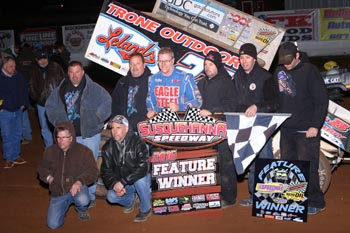 YORK HAVEN, PA 4/10/16
It’s been one of the most anticipated events of the season and if Sunday night’s BAPS Coatings & Supplies 410 Sprint Series opener at Susquehanna Speedway is any indication of what the remainder of the season brings, fans are in for a real treat.

Greg Hodnett held off a late race challenge from Lance Dewease to capture the opening night of the seven race BAPS 410 Sprint Series which was his fourth overall win on the season aboard the Mike Heffner Racing Enterprises owned No. 27.

After earning a redraw spot in his heat race advancing from 10th to third, Hodnett, of Spring Grove drew the number five for the 25-lap feature event and ran inside the top five during the first half of the race before grabbing the lead on lap 16 from Blane Heimbach.

Heimbach started on the outside front row and took the lead from Adam Wilt just before the midway point of the race.

Three early incidents slowed the event, the worst coming on lap six when Logan Wagner crashed hard in turn one to bring out a red flag.

Dewease, making his first start behind the wheel of the familiar Don Kreitz, Jr. owned No. 69K started 13th and turned in a great run, battling Hodnett for the lead during the late laps.

Heimbach settled for the third place finish with Lucas Wolfe coming from 14th to finish fourth with Wilt rounding out the top five. 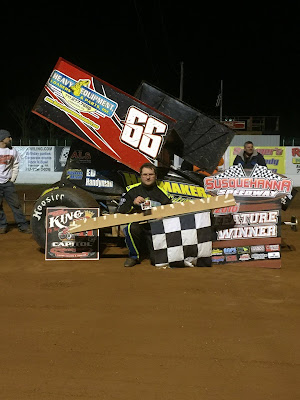 The Grantville driver scored his first win of the 2016 season leading all the way to take the win over Glenndon Forsythe, Kevin Nouse, Tyler Esh and Adrian Shaffer.

Tyler Esh, Glenndon Forsythe and Adrian Shaffer won heats for the 29 358 Sprint Cars. The consolation was won by Kody Hartlaub.

Susquehanna Speedway returns to action this coming Saturday, April 16 with the return of the Credit Connection Auto Sales Super Sportsman in their third race of the season. Joining the Sportsman for the first time this season will be the ARDC Midgets, Xtreme Stocks and the Mini Vans. It will also be York County Racing Club Night at the speedway. Pits open at 4pm, Grandstands at 5pm with racing beginning at 7pm.

For the latest news and results, fans are reminded to visit www.susquuehannaspeedway.net.