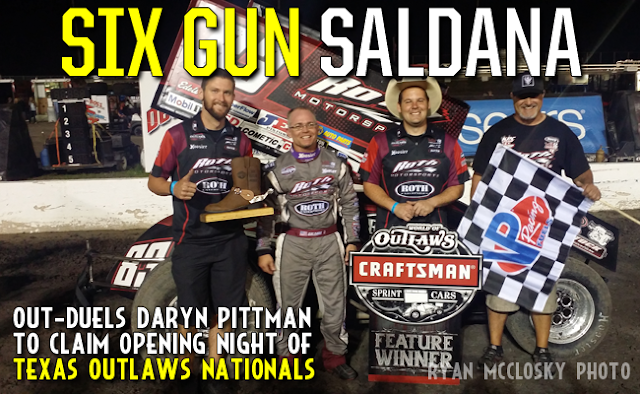 Saldana returned to victory lane for the first time since the opening night at The Dirt Track at Las Vegas Motor Speedway on March 3.

"We've had a really good car this year, but the driver's made a lot of mistakes," Saldana said. "Tonight everything hit on all cylinders and it was just an awesome night...I can't thank Dennis and Teresa Roth enough for this opportunity.

"It was just a great effort by everybody tonight, they worked really hard and I am proud of what we have done tonight. It shows that we should have done more of this but I have got to do a better job, and tonight I feel like I did a pretty good job."


Pittman, after leading the majority of the 25-lap feature, settled for a second-place finish, the seventh time he has finished in the runner-up position this season.

"We were sniffing three in-a-row, but just got beat at the end of the race," Pittman said. "I got in traffic and got tighter as the race went on and I guess I was just kind of afraid to try a different line.

To start the night, Sam Haftertepe Jr. in the Wells Engines/Highway 79 Collision Center No. 15H, looked to have the car to beat as he paced qualifying and captured the win in his heat to gain admittance to the dash. Hafertepe started on the pole-position for the six-lap dash after drawing a zero for the invert.

The Texas native continued his early night dominance, as he rolled to the victory in the dash after leading every lap and holding off a challenge from Kerry Madsen.

Once the green flag fell to start the feature event, Madsen, in the Keneric Healthcare/American Racing Wheels No. 29, accomplished what he could not do in the dash, and made his way around Haftertepe to claim the top spot.

Madsen's grip on the top spot was short lived and slipped away following an early race caution that allowed Pittman, who started the race in the third position and worked his way into second, to restart next to the leader and eventually complete the pass for the lead on lap nine.

As the race reached the latter portions, it appeared Pittman was staring at a three-peat after winning the SoCal Showdown at Perris Auto Speedway and the NAPA Wildcat Showdown at USA Raceway.

Pittman led a race-high 13 laps but Saldana, in the No. 83 Roth Enterprises/HR Livestock car, continued to lurk behind the leader. Saldana never allowed the leader to escape his grasps, even as the leaders reached the tail end of the field and started lapping slower cars.

Saldana pulled away from Pittman and third-place finisher Brad Sweet to claim the victory on the opening night of the Texas Outlaws Nationals at the historic Devil's Bowl Speedway.

"I moved around a little bit through the top and the middle and I could see Daryn [Pittman] was staying on the bottom and then moved to the top," Saldana said. "For some reason I decided to run the bottom through three and four and I caught some ground on him, so I knew if we got to lapped traffic I could use that. It just worked out, it was a great race, and the fans saw a great race - a lot of different lead changes with people moving all over the place."

Even though Pittman didn't capture the victory, he was still excited to continue their recent momentum and looks forward to tomorrow's race at Devil's Bowl.

"We just got beat, nothing to be disappointed about, we had a great race car," Pittman said. "We were up front tonight and that's all you can ask for. We will come back tomorrow night and try again and try to improve one spot."

Picking up his series leading 16th top-five of the season, Sweet in the Razorback Professional Tools/Riebes Auto Parts No. 49 managed to charge his way from the 11th starting position to score a podium finish.

"My guys have given me great race cars all year and we seem to shine in the A-mains," Sweet said. "These are the nights we need to have, big picture-wise, coming from 11th to third.

"We were really coming on strong there, but it was a short race - 25 laps went by really quick. We got caught in lapped traffic and were able to maneuver around a little bit. We got to get the car better for tomorrow night, big money is on the line and a few more laps."

The World of Outlaws Craftsman® Sprint Car Series will resume action tomorrow night for round two of the Texas Outlaw Nationals double-header at Devil's Bowl Speedway in Mesquite, Texas. Great seats are still available, and can be purchased at the track box office.

RACE NOTES: Donny Schatz scored his fifth KSE Hard Charger Award after gaining 11 spots in the feature...Brad Sweet picked up his series-leading 11th podium finish of the season...Daryn Pittman led 13 laps and continues to lead the series in laps lead at 150.