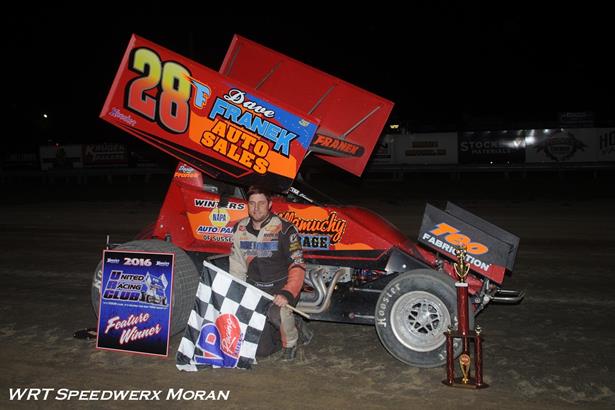 To say Davie Franek is on a roll is an understatement right now. Franek who started on the outside pole of the Sunday night B&G Auto Body sponsored United Racing Club event at Georgetown Speedway lead all 25 laps and continued his dominance in the early 2016 racing season.

Franek now has won 3 out of the 4 races in the 2016 racing season for the United Racing Club. Franek widened his points lead on 2nd place finisher Robbie Stillwaggon. Front row starters Stillwaggon and Franek lead the field of 19 cars to the green flag with Franek jumping out to the lead. The red flag was displayed shortly after half way for a flipping Brad Franks car in turn 3. On the restart Franek jumped to the lead again with Stillwaggon close in tow being. Rounding out the top 5 were Josh Weller, frequent PA runner Jason Shultz and the 5g of Curt Michael.

Just as Franek was battling lapped traffic the caution was displayed for a spinning 21c of rookie Cody Jourdan who was making his 2016 URC debut. On the double file restart Franek and Stillwaggon where wheel to wheel as they exited turn 2 and headed down to back stretch. The two cars appeared to touch just before the caution was again displayed for the spinning car of 47 Adam Carberry. Since no lap was scored on the single file restart Franek jumped out to the lead once more and widened his lead by almost a full straight away before the checkered flags few for the 28f. Following Franek was the 89 Burlington Auto Body of Robbie Stillwaggon, 29 Horstcraft Millworks Jason Shultz, 63 of Schearers VW and Audi Specialist of Josh Weller and the 22 B&G Auto Body Troy Betts.

In victory lane, Franek dedicated the win to long time URC driver and owner Guy Howie who recently lost his courageous fight with cancer this past week. Howie was a crew member on Franek's car after a long history of owning the famous 19H driven by Randy West, Brian Siedel, Michael Carber, and Ryan Bohlke to name a few.

The 3 heat races were won by Michael Haggenbottom, Josh Weller and Brad Franks. With 21 cars showing up there was no consi as Brian Carber and David Swanson both loaded up after heat race incidents. Swanson's was the worst of the two brining out the red flag after a hard hit in turn 4.