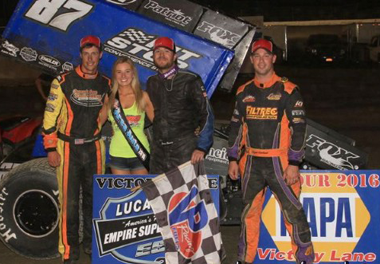 CENTER LISLE, NY – Jason Barney hasn’t had the best of luck when comes to the redraw with the Lucas Oil Empire Super Sprints (ESS).  The Brewerton, N.Y., driver has been stuck with the number 12 on numerous occasions already in 2016 and he was againon Saturday night at Thunder Mountain Speedway.

Barney wasn’t deterred as he worked the bottom of the speedway throughout the 25-lap main-event to eventually take the lead and then the win in the Lightening on the Mountain feature for a $3,750 win.  It was his first of the season with club.  The race was part of the overall series championship as well as the NAPA Auto Parts Tour of the US.

“That is three weeks in a row that I drew number 12,” commented Barney after the win.  “You know me, normally I get down on myself but tonight I just didn’t care.  I told the guys just do the right things and whatever happens, happens.  We’ve had great race cars all year and we should had a couple more wins but the driver cost of a couple good finishes.  What a great race team and a great race car.  We got a special thing.”

Preston encountered traffic on lap seven and before he had to navigate his way through the caution came out as Thomas Radivoy spun in turn four after hitting an implement tire.  On the restart the red was displayed as Shawn Donath got over after doing a wheel stand.  He wasn’t injured in the incident.

Preston took full advantage of the single-file restart racing away from the field again.  At this point Preston held the lead over Jones and Dave Axton while Barney had just made his way into the top five.  Preston pulled away from Jones with Barney working the very bottom of the track to advance.  Before the race reached halfway he was into the top three.

Chad Miller was the final caution of the race as he got over onto his side on lap 12.  After he was removed racing picked up again.  Preston led the way as Barney dispatched of Jones for second on lap 13.  He then focused his attention on the leader Preston.

Barney, driving an X-1 Race Car, tracked him down and pulled even on lap 15 for the top spot before diving low in turn one and sliding up off the exit of turn two to secure the lead for the first time in the race.  At that point Barney opened up with advantage with Preston battling with Howland for the second spot.

“We’ve come here two or three times and nobody could really make the bottom work,” stated Barney.  “I’ve tried it and tried it and I couldn’t make it happen.  We decided that since we were starting 12th we were going to throw something at it and we just got lucky.”

Traffic came into play for Barney for the first time as the race reached the final five circuits.  Barney’s pace was slowed which allowed Howland to inch closer to his back bumper.  With only two laps to go Howland was in striking distance as Barney was forced to squeeze his way between Matt Tanner and Keith Granholm as they battle for position.  He went wide into the third turn keeping Howland behind.

“I’m really good buddies with Matt Tanner and Keith (Granholm) is a good friend and customer of mine,” he said.  “I knew someone was chomping at the bit behind me because I had to be going 10 mph slower.  I wanted to be nice to them but if there was an opening I was going to go through it.  I didn’t get impatient I just waited for the opening and put it where it needed to be.”

From there Barney went on to win his 12th career Empire Super Sprint A-Main while Union Springs, N.Y., driver Bryan Howland finished second to collect $2,225.  Howland adjusted his line once Barney went by and that allowed him to snag the second spot away from Preston.

“He showed me a good line to get through three and four to come in a little higher and come off on the bottom,” Howland said of Barney.  “That actually is what got me into second.  He’s a good teacher when he goes by you.  It’s a late night but we all had fun.  The car was pretty good, a little off during the middle of the race, but it came back to life near the end of the race where I was at least watching Jason and not watching him leave me.”

Preston improved upon his fifth place finish last time out with the Empire Super Sprints as he finished third after leading the just over half of the race.  The Romulus, N.Y., driver has made only a handful of starts in 360 Sprint Car competition after making the jump from the 305 ranks.

“This feels pretty good,” commented Preston.  “This is only my sixth time in the car.  We were pretty successful with the 305 and we are hoping we can do that here too.  We’ve been fortunate so far to start up front so that helped tonight.”

A pair of Canadians completed the top five as Chris Jones crossed the line in fourth with Steve Poirier moved from seventh to fifth.

ESS/Thunder Mountain Notes – A stout field of 24 sprints in the pits…making his first ever ESS start was Alex Vigneault aboard his dad’s #55…Joe Trenca ran the World of Outlaw race in Charlotte on Friday, he was in the field the next night…Jones, Chuck Hebing, Ray Sitterly, Thomas Radivoy and Steve Hutchinson made first starts in 2016…Barney was the second driver in as many races to collect the 7-12 Bonus…ESS will return to Thunder Mountain on Sept. 3rd