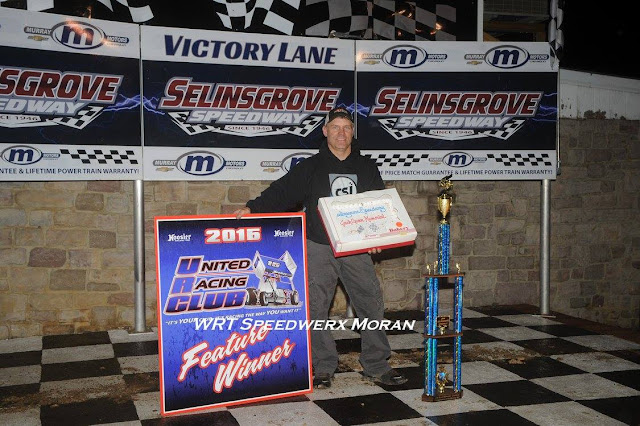 Mark Smith couldn't out run mother nature on Saturday night, but he did out run the other 27 URC competitors at the Selinsgrove Speedway. Smith who's win was worth a cool $2,200 timed 4th, finished 2nd in his heat race and started on the pole for the feature picked up his first United Racing Club win of 2016.

A field of 28 360 United Racing Club sprint cars packed the infield for the annual running of the Jack Gunn Memorial race. Heat race wins went to Clay New York's Joe Trenca, Josh Weller, and TJ Stutts. The consi was won by Colby Womer. Paulie Colagiovanni used his URC provisional and Derek Locke used a track provisional to be added to the tail end of the field.

With 26 cars starting the Gunn Memorial, Josh Weller jumped out to an early lead with the Franek Auto Sales 28f closely following. Soon a battle for 2nd place ensued with Mark Smith taking over the runner ups position. A lap 6 caution for 10 Paulie Colagiovanni and Davie Franek bunched the field back up. Weller was P1 followed by Mark Smith, Robbie Stillwaggon, TJ Stutts and Cody Keller rounding out the top 5.

On the double file restart Weller jumped out to the lead again, followed by the 1M of Mark Smith. On lap 8 Smith made his move on Weller and took command of the lead. By Lap 11, Davie Franek who had been involved in the lap 6 caution had made his way back up to the 11th position. While running in the top 10 Curt Michael blew a right rear coming off of turn 4 on lap 17. Smith continued to lead followed by Weller, Stutts, Stillwaggon and Jason Shultz now in the top 5 position. On the double file restart Smith jumped out to the lead again only to have the caution fly for the final time due to moisture on the racetrack. The storm Selinsgrove was trying to out run finally arrived just after the 1/2 way point of the race. The Jack Gunn Memorial was called on lap 18, with Mark Smith declared the winner.