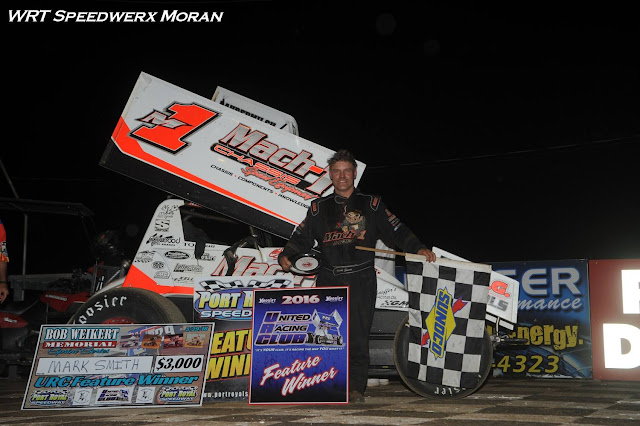 Mark Smith and the Mach 1 Chassis ‪#‎M1‬ completed the weekend URC sweep with his victory at Port Royal Speedway on Sunday Night May 29th. Fresh off his Kramer Cup victory less that 24 hours ago, Mark Smith drove away from the field enroute to his 2nd URC win of the year.

Smith who started in the 9th position in heat race #1 due to a poor pill draw. Smith wasted no time and putting the M1 to a qualified position and eventually finishing in the 3rd position.

With the 8 invert pill draw, Smith started in the 9th position for the main event. Smith wasted no time in the feature, and he put the M1 into position P1 by the 4th lap of the main event. A lap 11 caution due to a flat left rear tired on 410 feature's winner Greg Hodnett sending the Heffner owned #27 pit side. Hodnett would not return and on the lap 11 restart it was again Smith, followed by Josh Weller, Eric Tomecek, Matt Campbell and the 47 of Rookie Adam Carberry.

At the drop of the green, Smith again pulled out to a comfortable lead. A lap 20 caution again bunched up the field and putting the 1W of Eric Tomeck right on Smith's tail tank. The restarts did both Smith again as he used a lap 20 double file restarted to take a commanding lead and cruising on his way to the $3,000 winners prize.

With 38 cars on hand, the United Racing Club featured 4 heat races won by Robbie Stillwaggon, Eric Tomecek, Davie Franek and Greg Hodentt who was doing double duty. There were several double duty drivers on hand for the night racing action. Also running a 410 and a 360 were Greg Hodnett, Steve Buckwalter, Aaron Ott, TJ Stutts, Mark Smith, and the 5w of Lucas Wolfe. The 18 car B-Main was won by Aaron Ott running the high side and around the 5 of Justin Barger.

The United Racing Club will now prepare for another 2 race weekend kicking off Friday Night at the Williams Grove Speedway and then onto to the ultra fast 1/2 mile of Selinsgrove Speedway on Saturday night. Aaron Ott blew up his 360 just as he was getting pushed off and URC regular Mark Sasso used his provisional to partake in the nightly