Wilson Wins at The Dirt Track at Charlotte 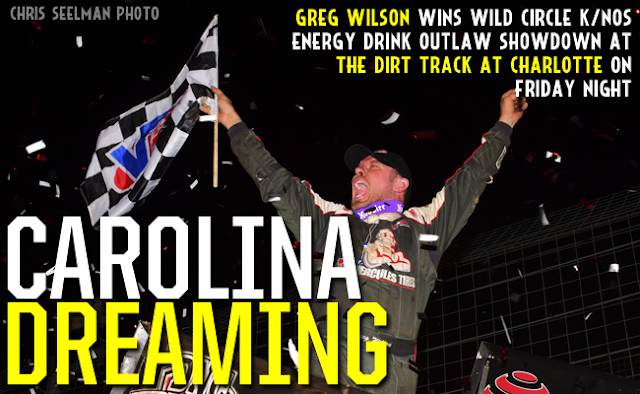 Wilson Wins Wild Race at The Dirt Track at Charlotte

Wilson, who won his first World of Outlaws race at the 4-Crown Nationals at Eldora Speedway in 2015, led just one lap of the 30-lap feature, after he passed race leader Shane Stewart on the final lap to capture the checkered flag.

"I've never dreamt in my wildest dreams that I would ever get this opportunity," Wilson said. "I have been blessed to run with the World of Outlaws this year. To do this in Charlotte, in front of all these fans, this is badass and that's all there is to it!"

Stewart, who led a race-high 25 laps, settled for a runner-up finish after he easily controlled the top spot for much of the feature.

"Greg [Wilson] is new to the Outlaw deal and it's always cool to see someone get their first Outlaw win - I'm not sure if he's won an Outlaw race before or not," Stewart said. "We hated to lose a race like that, but hats off to Greg."


Earlier in the night, Stewart, in the No. 2 American Born Moonshine/Eneos Oil car, captured his first quick-time of the 2016 season when he clocked in at 13.913 seconds. In his heat race, Stewart finished second to Wilson, which created a preview for the feature later in the night.

Both drivers earned positions in the six-lap dash, but an unfortunate invert draw of six sent Wilson to the rear and placed Paul McMahan on the pole.

McMahan did not hold the top spot in the dash once the green flag dropped, as Daryn Pittman, who started in the fourth position, rocketed to the front of the field. Pittman, the most recent winner on the World of Outlaws tour at New Egypt Speedway on Tuesday night, claimed the dash victory which placed him on the pole position for the feature.

Even though Pittman started on the pole-position, he never led a lap as second-place starter Cole Duncan, in the Helms Construction/Motor City Auto Transport No. 22, took the lead when the green flag fell.

Duncan, a Lockbourne, Ohio -native, controlled the top spot for the opening four laps until Stewart, who started in the fourth position, utilized the outside line to build up enough momentum to capture the lead on lap five.

Stewart opened up a sizeable lead early in the race, and held off challenges on a mid-race caution on lap 12. Stewart appeared to be cruising to his third victory in 2016, but a caution with six laps left created late-race drama.

The Hercules Tire/Ohio Logistics No. W20 driven by Wilson restarted in the third position behind Duncan and Stewart. The top three remained glued nose-to-tail with little room separating the three drivers from the top spot.

Wilson, who found grip on the bottom of the track, powered around Duncan for second and set his sights on the leader with just a few laps remaining. When the white flag was displayed, Wilson had Stewart firmly in his crosshairs for a race-winning pass.

Exiting turn two, Wilson accelerated in front of Stewart and captured the lead with only two turns to go in the feature. Wilson held off Stewart and claimed his first checkered flag of his rookie campaign in 2016.

"It's a little surreal right at the moment...I'm just in shock," An emotional Wilson said. "I am racing with the best sprint car drivers in the world, night-in and night-out. We missed that show in New Egypt and looked like maybe we shouldn't even be out here, and then we turned it around tonight.

"That's dedicated work by our team and all of the people that are a part of this. I am truly grateful. Once again, if you're not a Wilson fan, thank you for spending your hard-earned money to be here tonight."

Even though Stewart was hoping for a win, a second-place finish was well deserved after a rough stretch of races through Indiana and Pennsylvania, in which the driver wrecked his primary car and only scored two top-tens in four races.

"It was good to have Justin [Marks] and Kyle [Larson] in the house, and to have a good finish for them," Stewart added. "There's a lot of Eneos Oil people back at the trailer too, so just a good solid finish for everybody at Larson Marks Racing. I love all these fans - it's always a joy to come here to Charlotte."

Completing an Ohioan domination of the podium, Duncan secured the third-place finish after leading laps early.

"We're just proud to be here, and thanks to all the fans for coming out," Duncan said. "We rolled across the scales with a flat tire - it was starting to go there at the end. It might've cost us one but I am happy for Greg, if anybody deserves to win one, it's him.

"We've been fast all year but just can't seem to find victory lane yet, but they got to be coming. We are pretty consistent and we keep putting the time and effort in. We'll go back to the drawing board, we don't have to change much but just try to figure out how to keep the tires on there."

Point's leader Brad Sweet finished in the 10th position, five positions behind Donny Schatz who is now just 41 markers behind Sweet for the top spot in the championship battle.

The World of Outlaws Craftsman Sprint Car Series will march back into the Hoosier State for a Memorial Day showdown at Lawrenceburg (Ind.) Speedway on Monday, May 30. For more race information and ticket purchasing options, visit: www.WoOSprint.com/Lawrenceburg-Speedway.

The Dirt Track at Charlotte Notebook

RACE NOTES: Greg Wilson captured his second career World of Outlaws victory and becomes the 10th different winner in 2016...Shane Stewart scored his first quick-time of the season...Brent Marks picked up 11 spots to score tonight's KSE Hard Charger Award, which is the most spots gained by a driver since David Gravel advanced 11 spots at Plymouth Speedway exactly two weeks ago.