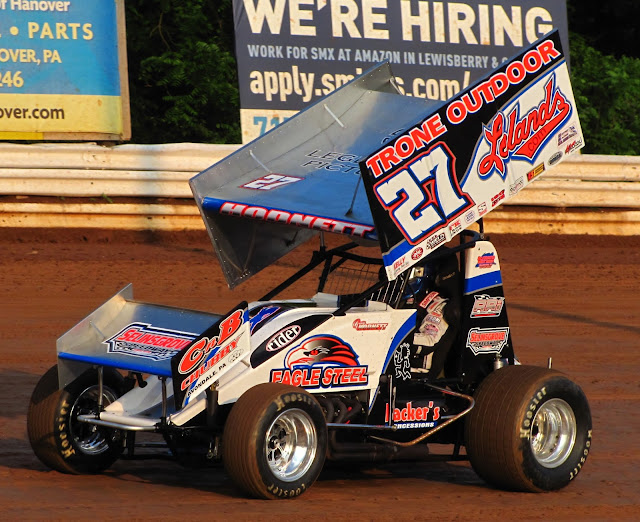 MECHANICSBURG, PA – In the first visit in 10 years by the Super Dirtcar Series Modifieds to Williams Grove Speedway, it was Matt Sheppard taking the $6,000 win Wednesday night. It was the 36th career series win for the four-time champion.

Tim Fuller started on the pole of the 100-lap modified feature and grabbed the early race lead over Ryan Watt and Sheppard. The first caution flew when Stewart Friesen slowed with seven laps completed.

Sheppard, of Waterloo, N.Y., would get by Watt for second on the restart as Fuller continued to lead. Billy Decker was running fourth and former World of Outlaws Sprint car champion Dave Blaney was up to fifth from eighth.

The caution flew when Eldon Payne’s tire shredded on the frontstretch with 19 laps completed. Watt would get back by Sheppard for second. Fuller led a freight train of modifiedS around the inside line of the speedway as the top groove went away.

Fuller held a comfortable lead as Sheppard would get back around Watt for second with a move off turn four and down the frontstretch. Fuller closed on the back of the field and Sheppard closed on him.

The leaders got a break with 37 laps completed when Danny Johnson slowed in turn four. The top three remained the same following the restart, but Blaney moved up to fourth.

Sheppard began to pressure Fuller for the lead. They made contact in turn four and Sheppard was the new leader as they completed lap 53. Watt slowed moving Blaney up to third and bringing out the caution flag.

The top three remained the same following the restart, but another caution flew with 61 completed. Two more cautions slowed the pace.

Blaney tried to take second but couldn’t quite make the pass as they raced into turn one. A third turn spin slowed the field again with 25 to go. Blaney was able to make the pass work this time.
Sheppard initially pulled away, but Blaney was there with 15 laps left. Blaney got to Sheppard’s bumper two times, but couldn’t get to his inside.

Blaney’s final shot came with seven laps to go as the caution flew.

Sheppard got a good restart and controlled the final laps to get the win by 2.702 seconds over Blaney, Fuller, Larry Wight and Decker. Friesen rebounded for sixth and Frank Cozze seventh and Mike Mahaney eighth. Brett Hearn came from the rear to ninth and Keith Flach rounded out the top 10.

“The track starting locking down a little bit early,” said Sheppard. “I decided to ride it out and drive the car nice and straight. On the long runs, it seemed like the guys in front of us would get slower and slower and we’d maintain. I think that’s what won the race for us tonight. I was able to keep the air in the right rear tire. Once we got out front, I wanted to hit my marks and take it easy and drive the thing straight and we were able to do that. To put a win at Williams Grove on my resume means a lot.”
Brett Hearn set overall quick time with a lap of 20.893 seconds. Heat races for the 34 modifieds were won by Hearn, Stewart Friesen, Frank Cozze and Matt Sheppard. Duane Howard won the consolation.

A three-car crash on the frontstretch involving Kody Lehman, Adam Carberry and Will Eggimann brought out the red flag on the initial start of the United Racing Club 360-Sprint car feature.

The caution flew with one lap completed for a spin by Chuck Hebing.

Hodnett had passed Smith before the caution and got Shultz with a pass off turn two. Hodnett was running the bottom and Stillwaggon pounding the top.

Smith moved by Shultz for second as Hodnett and Stillwaggon were about even at the backstretch bridge. They were still close at the flagstand with Stillwaggon leading to complete lap seven.

Hodnett finally made the bottom groove work off turn two to take the lead. Stillwaggon fought back entering turn three in traffic, but Hodnett got back by off turn four to complete lap 10 as the leader.
Smith passed Stillwaggon and had a run on Hodnett coming off the second turn, but the race was slowed when Jason Clauss slowed to a stop on the backstretch with 12 laps completed.

Hodnett pulled away from Smith on the restart. URC point leader Davie Franek passed Shultz and Stillwaggon and was up to third as Hodnett worked the bottom and Smith the top.

Hodnett closed on a group of lapped cars with three laps to go, but stayed smooth and straight on the bottom. Smith closed on the final lap, but Hodnett passed three slower cars in the final turn to keep Smith in second by 1.203 seconds at the checkers.

“The car has been really good,” said Hodnett. “Rider just built this motor this year. It runs really good. We’ve been fortunate to have great starting positions and able to move through the heat races. We were bad in one and two. I thought in three and four as long as we had track position, we’d be okay.”

Heat races for the 24 URC Sprints were won by Franek, Hebing and Hodnett.