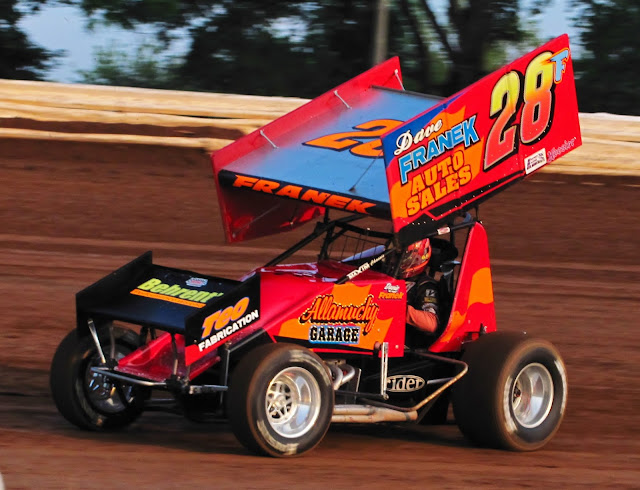 The start was crucial according to winner Davie Franek, of Wantage, N.J.,  after the Newville Family of Companies 360 Sprint Car feature was over. Franek marked his second straight win at the speedway as well as his second Firecracker 30 win in a row Saturday night at Selinsgrove Speedway.
Franek went by Mark Smith in turn four on the first lap and never relinquished the race lead. A great battle for third between Larry Kelleher, Matt Campbell, and Derek Locke was interrupted by a yellow flag on lap 10. The field was brought back to Franek's rear bumper and Mark Smith pulled even with Franek on the restart, but quickly settled back into second. Smith would stay there until the checkered flag. Locke worked by Kelleher for third. Eric Tomecek rounded out the top five finishers. Jason Schultz was sixth followed by the IBEW Local Union 1319 hard charger Nate Snyder. Matt Campbell took the top honors for the 358 engine competitors from Newville Family of Companies and Lelands.com. Campbell finished eighth with Michael Walter and Jim Shuster the top ten finishers.

Franek and Campbell were the sprint car heat race winners.

Coleby Frye picked a good number to allow the 0 car to start at the front. His goal was to stay there for the full 25 laps in the second race of the Moon Shine Camo Route 35 Challenge Series. Frye looked to be the car to beat while Bryan Bernheisel and Jeff Rine ran second and third.

Bernheisel kept Frye in his sights, but was not able to close in until a yellow flag on lap 15 changed the whole outlook on the race. Frye got out of shape on the restart and the top three drivers went three wide on the restart. Frye and Bernheisel made contact and Rine flew into the race lead.

Rine led a hard charging Chad Hollenbeck when another yellow flag bunched up the field on lap 23. Rine was in search of his 100th career Selinsgrove feature win when the green flag flew. Rine got away from Hollenback on the start and never looked back taking win 100. It was Rine's fourth win of the season.

Lori Croop led the A&A Auto Stores Pro Stocks to the green flag for the popular stock division’s  feature event on Saturday night. Croop led the first two laps before ninth place starter Brad Mitch jumped to the inside on the home stretch to take the top spot. Mitch went Amuch of the race unchallenged, but a late race restart gave the field a shot to take the race win away from Mitch.

Tommy Slanker restarted second with one lap to go after grabbing the spot from Matt Wilson. Slanker followed Mitch into turn one and used the inside to challenge Mitch coming to  the checkered flag out of turn four. Mitch held on for his second win of the season and his 21st of his career at Selinsgrove Speedway.

Slanker finished in second followed by Wilson. Jason Zook drove the s8 to a fourth place finish after starting 11th. Jake Buck had a strong run to round out the top five finishers. The top ten finishers included Jim Payne, Matt Hornberger, Jeff Ceballa, Nate Herman, and Peanut Heintzelman. There was a pair of new heat race winners for the Pro Stocks on Saturday when Matt Wilson and John Troxell took checkered.

Ryan Leister was challenged for much of the Roadrunner feature by Keith Bissinger. Even on the final tour of the track Bissinger kept the pressure on Leister. Leister power around the final corner and grabbed the final checkered flag of the evening. Bissinger came home in second. Two-time winner this year Dustin Snook, Ray Zook, and Corey Kepner rounded out the five finishers.

There will be no racing next Saturday (July 2nd) at the Speedway. Sunday, July 3, will be race day at 7:30 p.m. with the 410 Sprint Car Speedweek Finale plus the 305 Sprint Cars and the Pro Stocks have been added in a non-point event. The race will pay tribute to Jan Opperman and Dick Bogar.