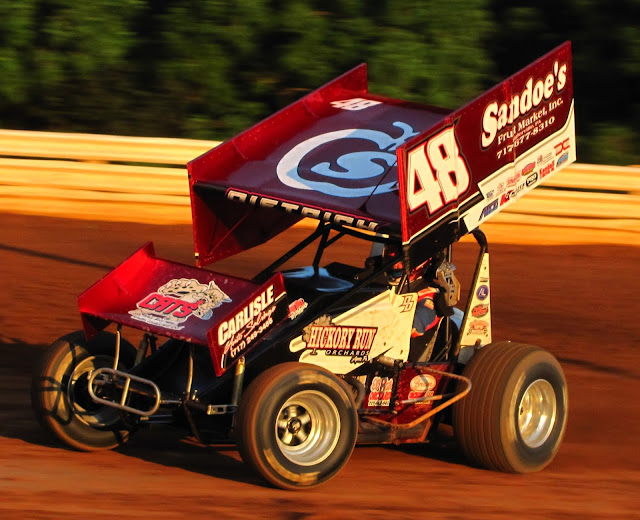 Danny Dietrich did something no one has been able to do this season. And that was pass Lance Dewease while he was leading a feature event.

After leading the first 16 laps of Sunday nights, BAPS Coatings & Supplies 410 Sprint car feature at Susquehanna Speedway, Dietrich lost the top spot to Dewease-Central PA’s hottest driver and it would appear that Dewease would drive to yet another win aboard the Kreitz Racing sprint.

But Dietrich had other ideas.

He stayed close to Dewease as the pair worked lapped traffic and was able to pounce on the veteran driver in lapped traffic to take the lead on lap 29 and held onto to pick up his first win of the season in the BAPS series at Susquehanna aboard the Gary Kauffman Racing, Sandoes Fruit Market #48.

Dietrich, who recently captured his first career Pennsylvania Sprint Speedweek championship drew the number two starting spot after an impressive heat race effort, where he drove from 10th to second to put himself into the redraw.

After polesitter, Kyle Reinhardt spun on the opening lap, that moved Dewease to the point alongside Dietrich and the fans were in for 30 laps of entertainment from that point on.

Dietrich scored the win over Dewease with Brent Marks coming home third after driving all day after competing in the Kings Royal the night before. Lucas Wolfe finished fourth ahead of Brandon Rahmer as Brian Montieth came home sixth after starting 11th ahead of 14th starter Adam Wilt, Brock Zearfoss, Davey Sammons and Reinhardt. The top 10 cars were the only cars remaining on the lead lap.

Reinhardt, Wolfe and Marks were BAPS 410 Sprint car heat winners for the 31 car field. The consolation was won by Kyle Moody.

John Barnett led flag to flag to capture his first ever win in the PASS/IMCA 305 Sprint car 25-lap feature.

Barnett started second and held the point through the duration of the feature, despite a lap 23 yellow flag that bunched the field and put multi-time winner Tyler Reeser on his bumper.

But Barnett was able to keep Reeser at bay to score the win with Reeser, Dave Brown, Billy Ney and John Martin completing the top five finishers.

Ney, Martin and Stillwaggon were heat race winners for the 31 305 Sprint cars while Kassidy Kreitz was the consolation winner.

The next BAPS Coatings & Supplies 410 Sprint Car Series event will take place on Sunday night, August 21st in the Justin Snyder Salute to The Troops 30-lap, $5,000 to win event.

Fans are reminded to check out www.susquehannaspeedway.net for the latest news and results.