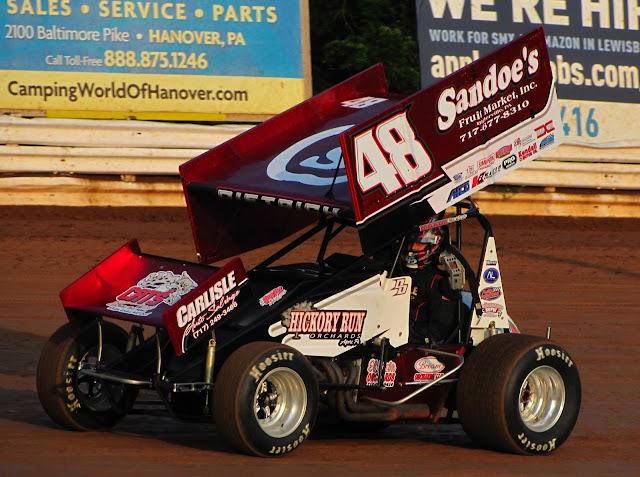 Dave Blaney was the night's Fast Tees Fast Qualifier and led the field to the green flag in the night's $5,000-to-win feature event. Dietrich wasted no time jumping into the race lead from his second starting spot and led lap one. Greg Hodnett quickly worked his way back into the thick of the battle going by Blaney for the second spot on a lap three restart.

Brent Marks was also on the move working into the top five on the restart and soon passed Blaney for the third spot. Lucas Wolfe mounted a charge back to the front of the field during the green flag run. Dietrich was soon in lap traffic and his challenge grew as his throttle spring broke on his car. Hodnett began to close in on the leader on lap 19 as Dietrich tried to maneuver around the tail end of the lead lap cars.

The Pa Sprint Series 305 Sprint Car feature was to follow the 410  Sprint race. Dave Brown took the race lead at the start and was leading when driver Jake Waters was involved in a wreck in turn one that resulted in a fire.  Waters was extricated from his car and transported to the Lehigh Valley Medical Center with undisclosed injuries.

Because the Purple K extinguisher formula used to put out the fire was nearly depleted and with the speedway surface saturated with racing fuel, the balance of the racing program was ended by track and safety officials.

The 15-lap Pro Stock feature will be made up at a later date.

This Saturday, July 9, Selinsgrove Speedway will present the rescheduled PEPSI Pack The Track Night featuring $5 general admission for a four division racing program of 360 sprint cars, super late models, pro stocks, and roadrunners at 7:30 p.m. This Saturday will also be Kids Night with a kids carnival and bicycle, big wheels, and power wheels racing on the front stretch. Wolfe went by Marks on lap 20 and closed in on Hodnett on lap 21. At that point in the race the top four on the speedway were the top four in PA Speedweek points with Dietrich leading Hodnett, Wolfe, and Marks. Then Marks blew a tire on lap 22 to bring out the yellow flag. Hondett  would get the restart he was hoping for behind Dietrich. Hodnett began to apply pressure right away on Dietrich, but Dietrich remained unshaken and began to drive away as Blane Heimbach  drove by Wolfe into the top three.

Dietrich pulled away to the win. Much like Stevie Smith did a year ago, Dietrich clinched the Speedweek crown with a win in the finale.  Hodnett was second followed by Heimbach. Wolfe and 13th place starter Aaron Ott were the top five finishers.  Blaney came across the line in sixth followed by Ryan Smith, Doug Esh, Steve Buckwalter, and Tim Shaffer.