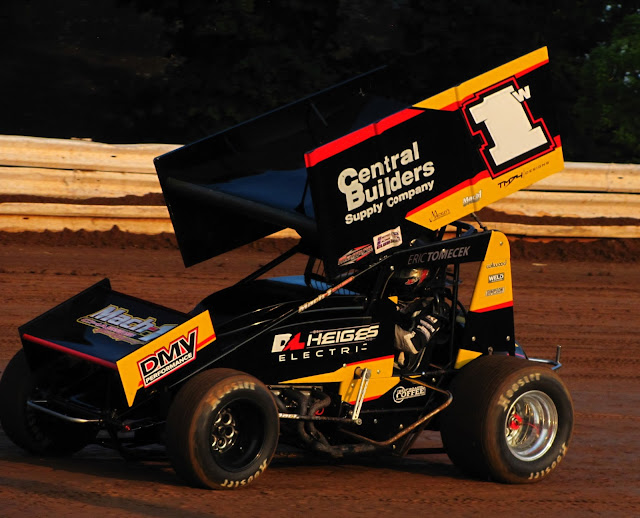 Selinsgrove Speedway will present the 16th Annual Mach 1 Chassis National Open for 360 sprint cars Saturday, July 30, paying $10,000 to win as part of the inaugural Mid-Atlantic Crown Series “Weekend of Money” that includes the Lelands.com 360 Nationals at Williams Grove Speedway Friday, July 29, and concludes with the Cole Cup at the Utica Rome Speedway in New York Sunday, July 31. The super late models and pro stocks will also be on the July 30 racing card at Selinsgrove Speedway.

Eric Parker took the lead early in the makeup feature for the 360 Sprint Cars. The race was being run from the Jeff's Auto Body & Recycling Center Driver & Fan Appreciation Night July 16th. Michael Walter wrestled the top spot away from Parker on lap six. Eric Tomecek also moved by Parker for the second spot a few laps later. Mark Smith was in a battle for the third spot when his engine left go setting up a lap 17 restart. 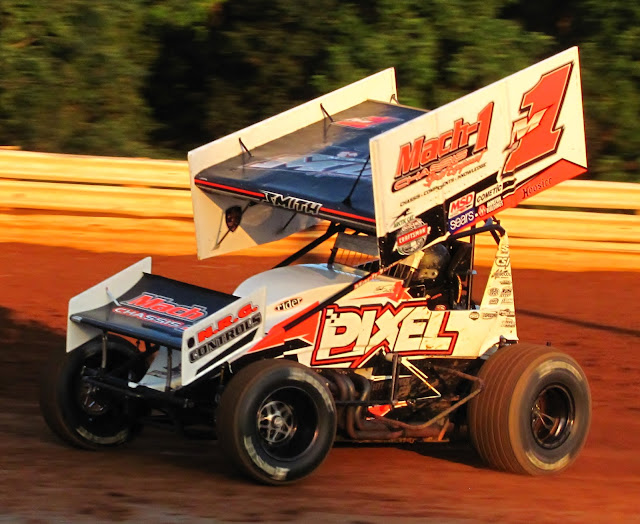 The 360 Sprint cars competed in a full show after the makeup feature was completed. The Newville Family of Companies bonus was again on the line for 358 Sprint Car teams going into the night as well. Mallie Shuster started from the front row and showed the way early on. Adam Carberry reeled in the race leader in lap traffic, but then tangled with a lap car ending his bid for the win.

Eric Parker had his 358 engine in on Saturday night and Parker was in a battle for the lead with Mallie Shuster on lap 13 when Shuster was in lap traffic. Parker slide a little too high on the race track and Davie Franek slid by. Franek's time in the podium spot was short lived as his right rear tire blew out.

Shuster continued to show the way with Parker and 11th place starter Mark Smith now in the mix. Smith worked by Parker and looked like he was out of time to take the race lead away until a lap 22 yellow flag was thrown. Smith used a swooping move on the front stretch to take away the top spot from Shuster on the restart and drive to his third win of the season. This was the final race before next weekend’s $10,000-to-win National Open for the 360 Sprint Cars. Shuster, Derek Locke, Larry Kelleher, and TJ Stutts were the top five finishers.

Coleby Frye had revenge on his mind when he pulled into Selinsgrove Speedway on Saturday night in round four of the Moon Shine Camo Route 35 Challenge Series. Frye almost grabbed a win the last time the Late Models had a Route 35 Challenge Series ace at the track, but fell a little short. The story was written a little different on Saturday night.

Frye made a big move on the outside early and began chase of race leader Tony Adams. Adams led until lap 18 when Frye made a move on what he called in victory lane the only mistake Tony Adams made all night. Once out front Frye fended off all challengers including a late race charge from Andrew Yoder. Jeff Rine got to the third spot, but could only watch the leaders drive away as he lost a right rear tire at the end of the feature running third. Frye, Yoder, Donnie Schick, Adams, and Mike Lupfer were the top five finishers.

Bryan Bernheisel came across in sixth just ahead of Rine who entered the night the Moon Shine Camo Route 35 points leader. Steve Campbell, Dave Brouse Jr, and Chad Hollenback were the top ten across the finish line. Andrew Yoder, Donnie Schick, and Tony Adams won heat races for the field with Derrick Casner the consolation winner.

David Stemme used a dominate run to claim the first checkered flag for the Mid Atlantic Modifieds ever at Selinsgrove Speedway. Stremme started in the eighth spot and charged into the race lead on lap four. A caution flag on lap seven reset the field, but Stremme pulled away again when the green flag was thrown. Modified point leader Mike Potosky pulled into second before the yellow flew again on lap 15.
Potosky slowed and dropped out on lap 18 as Stremme drove to the win. Rick Hulson was second followed by Dan Davies, Gary Long, and Mike Reynolds. Heat races for the 18 car field went to Hulson and Long.

Brandon Moser had mechanical issues in last week's A&A Auto Stores Pro Stock competition. This week he wasted no time bolting into the race lead when the green flag was thrown on the feature event. Moser slide a little too high after a few laps of leading and the lead fell into the hands of Matt Hornberger. Hornberger did not hold the hot potato long before Tommy Slanker took over. Slanker did all he could to run the inside line, but Brad Mitch was able to drive by into the top spot.

Mitch was in a good spot until the yellow flew on the last lap, setting up a one lap shootout. Mitch didn't get the start he needed and Kurt Wray drove by to lead the event. Wray was looking for his career Selinsgrove Speedway win. Although the record book will show he only led one lap, it was the most important one. Wray made the inside move by Mitch for the win. Slanker, Hornberger, Nate Stroup, and Jeff Ceballo were the top five. Mitch was sixth. He was trailed by Matt Wilson, Jeremy Kline, Lori Croop, and John Troxell. Slanker and Mitch took heat race checkered flags. 17 Pro Stocks were in completion.