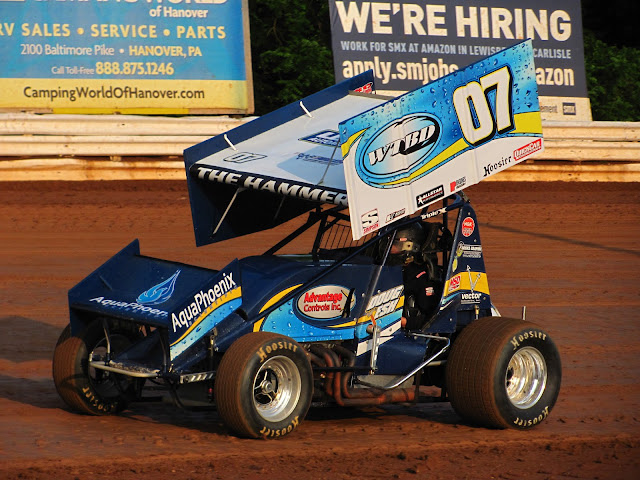 PORT ROYAL, Pa. ? Doug Esh of Lancaster turned back the challenges of Brent Marks to win the 25-lap sprint car feature at Port Royal Speedway on Saturday night in a high-wire performance that found the front runners bouncing off of the fences to pick up the payday.

Dylan Yoder of Selinsgrove wired the field for a win in the 22-lap super late model main, besting point leader Andy Haus for his second oval win of the season.

Elsewhere, Harold Ranck Jr. scored his first ever win in the econo late model division while Jason Zook won his first of the season in the xtreme stock division.

The barnburner of a sprint car feature found Esh and Marks sharing the front row for the start of the main event and Esh took command when the green unfurled.

On a lightning-fast extreme top groove, the front-runners of Esh, Marks, Ryan Taylor and James McFadden entered the rear of the field on just the fourth lap before the races first caution flag fell with six laps completed.

Another yellow flag with nine laps away again bunched the field however the final 16 laps would go non-stop with thrilling moves and saves the name of the game by Esh, Marks, Taylor and McFadden.

With the circling of every tour both Esh and Marks tried to go higher and higher around the speedplant only to each spend their fair share of time meeting the outside wall in the first and second turns.

Esh was first to clout the outside wall in the second turn and ride it just briefly before regaining his composure.

Marks took his shot at the outside fence next but perhaps Taylor got he biggest chunk of the steel as he hopped along the biggest part of the fence in the same corners before dropping back down to stay under power.

Meanwhile McFadden was swooping high and low around the track, pulling what he later described as ?quarter-mile moves on a half-mile racetrack,? to contend for the top spots.

Esh was the class of the field despite his brushes with defeat and that included three stabs by Marks for the win.

With under 10 laps to go, Marks got close enough to pull a daring slide job attempt in the first and second turns only to see Esh overcome using his momentum.

But not to be outdone, Marks came down off of the top as he blasted onto the backchute and while Esh went to the outside of a lapped car, Marks swerved left and went three-wide with Esh and the backmarker as the trio raced past the scoreboard.

Moments later, Esh nearly crashed out while putting Trenton Schaeffer a lap down in the first turn after the pair made contact with Esh hopping over Schaeffer?s left front.

All the top drivers raced on the ragged edge all the way to the finish with McFadden perhaps pulling off the most brazen moves during the last eight laps to finally get by Taylor for third and his first podium finish since taking over the reigns of the Highland?s No. 3 machine.

Esh?s margin of victory for his first oval win of the season was .652 seconds over Marks, McFadden, Taylor and Brock Zearfoss.

Heats went to Stroup and Taylor with Cisney setting overall fast time with a lap of 17.466 seconds.

Dylan Yoder took the lead from the second starting spot when the super late model main began and he would drive uncontested to the win going away.

Trent Brenneman chased Yoder in second for the first 11 laps before fifth starter Haus was able to drive by for the spot.

But Brenneman did challenge to reclaim the position only to later finish a solid third.

Yoder pulled away consistently during all 22 laps, pulling out to a final margin of 8.402 seconds at the finish while lapping up to 10th place on the field.

Coleby Frye was fourth at the finish followed by Dan Stone, who started on the pole.

Harold Ranck Jr. would lead all 15 laps of the econo late model main to win over Ryan Walls.

Walls got around Chase Bowsman for second on the ninth tour.

Heats went to Fedder and Bowsman.

Jason Zook scored his first xtreme stock feature of the season, wiring the field for his win.


PRS 2016 ? Racing through a new decade with a new attitude!
Port Royal Speedway

The Only Place To See Super Sprints And Super Lates Every Saturday Night
Posted by Bill McIntyre at Sunday, July 10, 2016