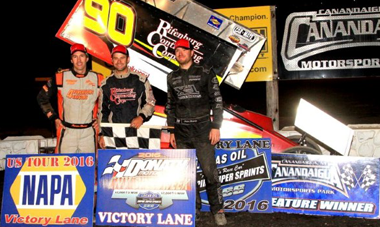 CANANDAIGUA, NY – Matt Tanner has nearly doubled his career win total with the Lucas Oil Empire Super Sprints (ESS) in a five day period.  The Stephentown, N.Y., driver, fresh off a win last Saturday at Merrittville Speedway, earned his second win in less than week on Thursday night at the Canandaigua Motorsports Park.

Tanner led all 25-laps of the Mach 1 Chassis A-Main as part of Donath Motorworx CNY Speedweek feature en route to the $2,000 payday.  It was a much improved effort from Wednesday night at Brewerton Speedway which saw him finish deep in the field.  The strong run earned him points in the chase for first ever Speedweek title as well as points in the NAPA Auto Parts US Tour.

“We are having quite a week,” said Tanner.  “Last week we won at Merrittville and last night we had a bad starting spot and threw something at the car.  I think we finished 20th.  We were horrible.  To come tonight and run this good, I’m really happy.  It kind of puts us back on track for the week.”

Although Tanner started on the front row of the main-event, it wasn’t an easy victory as he held off two former Speedweek champions in Jason Barney and Steve Poirier.  Barney started from the pole position and worked the inner portion of the speedway as Tanner took to the middle lane during the opening lap.Tanner barely beat Barney to the line for the lead of the first circuit.  Barney remained close with Tanner remaining in the outer lane of the speedway.  Poirier joined the fray by the third circuit after quickly marching his way forward from eighth.

“I thought if I could clear him then take his line for a couple laps that would slow him up,” mentioned Tanner about the battle with Barney.  “I knew he wasn’t going to come off the bottom.  I was surprised we could hang with him in the middle.  That is was what we setup for.  We figured the top was going to wear out.  Being able to run the middle was the only shot we had to beat Jason.”

Tanner found traffic on lap seven which caused his lead over Barney to rapidly dissipate.  Tanner was mobile enough that he could move to different lanes if necessary but at times he faced three-wide battles in front of him.  This saw Barney and Poirier pull up to his back bumper.

By lap 13 the three drivers were in a dogfight for position.  Tanner remained the leader while Barney looked to drive underneath him and Poirier attempted to do the same around the top of the track.  Each time Tanner had an answer as he made the necessary moves to keep the duo behind him.
On lap 16 Tanner got a major scare as he came off of turn four in traffic.  Tanner and Jonathan Preston came together at the beginning of the straightaway sending Preston hard into the outside wall.  Tanner suffered some damage to his right rear tire cover but that was the extent of the damage.

Tanner was happy to finally see clear race track again as he went back to his preferred lane which saw him put some distance between himself and Barney.  Barney had his hands full Poirier as he attempted to snatch the second spot from him.

Barney and Poirier swapped the runner-up position several times.  Barney eventually took it for good with just five laps remaining.  At that point it was too little, too late as Tanner had built his lead to a half straightaway.  Tanner went on to score the win while Barney, of Brewerton, N.Y., had to settle for second after starting on the pole.

“Matt had a great race car tonight,” stated Barney.  “That restart at the end gave him a chance to get out and get going.  We didn’t fire that great.  In traffic we were right there with him.  I thought it was going to be an awesome race.  I’m happy to finish second after an off night last night.  I’m disappointed to let one slip away.  Hopefully we can finish out Speedweek decent.”

For the second consecutive night Poirier found himself in the last spot on the podium.  The defending Speedweek and series champion threw everything he could to get by Barney to no avail.

“It looks like we are stuck on third place,” joked Poirier.  “I felt like at some point we had a chance.  We moved to third place quickly, but Jason and Matt were really good.  I tried everything.  I was happy to get that yellow because I made a couple of changes.  It was fun racing side-by-side with Jason for a couple of laps.  In the end they were just better.  I’m happy with the finish.”

Chuck Hebing moved up from seventh to finish fourth in the final rundown while Daryl Ruggles moved from the 10th starting spot to fifth.

ESS/Brewerton CNY Speedweek Notes – A total of 31 sprints on hand for Night#2 of CNY Speedweek…Paul Kinney suffered engine woes during Timed Hot Laps, he picked up a ride with the Shawn Donath back-up and made the A-Main…After two nights Steve Poirier leads Sammy Reakes, Chuck Hebing, Mark Smith and Larry Wight on the Speedweek Points…Night #3 moves to Can-Am