No Panic in Franek at Georgetown on Friday Night 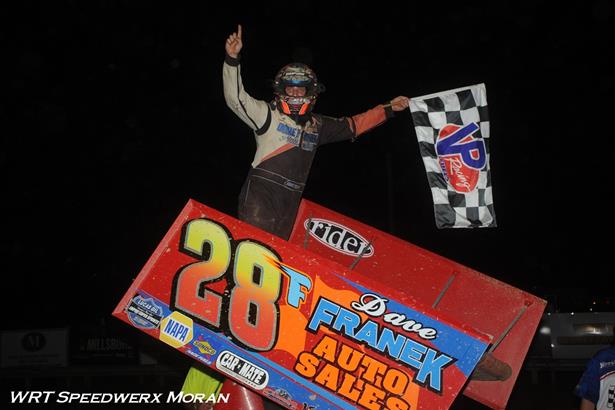 Davie "No Panic" Franek used a last lap pass of Delaware native Kevin Darling to take win #7 on the year and win #4 on the year with the United Racing Club. With the win Franek increases his points lead to 71 over 2nd place Robbie Stillwaggon.

With the "4" invert pill drawn by heat race #1 winner Josh Weller, the front row was comprised of the Ken Darling & Sons Sewer, Aquaflow Pumps and Design #9D of Kevin Darling and the Dave Franek Auto Sales and current URC Points Leader #28f Davie Franek. After the initial start was called back, Darling who was only making his 3rd appearance of the 2016 season quickly jumped to the outside of Franek taking command of the lead. Darling lead Franek, followed by Josh Weller and former URC Champion and defending 305 sprint car champion Mike Haggenbottom.

With Darling in command and now lapping cars around lap 7, a lap 9 caution for URC Rookie Adam Carberry brought the 28f of Franek to Darlings back bumper. Darling, a URC veteran, was not intimidated by one of the hottest 360 drivers in the nation, and at the drop of the green for the restart, both Darling and Franek were side by side entering turn 1. Franek slid up the track a bit, but Darling stayed in it and pulled Franek coming off of turn 2 and into the lead going into turn 3.

With Darling in command, also on the move was the GEI Enterprises, Valley Forge Inc, Bill Gallagher owned #5g of 9 time URC Champion Curt Michael. Michael who started in the 10th position was shown in 7th position at the halfway point and up to 5th with 5 to go eventually finishing in the 4th position.

With the two laps to go flags showing at the flagger stand, it appeared that Darling was on his way to his first victory of 2016, but when Darling came to the white flag, going into turn one, his left front touched a lapped car of Brett Michalski. Darling tried to go around Michalski on the high side, and the two were wheel to wheel coming off of turn 2.

With another lapped car of Jason Cherry to the inside of the racetrack, Franek who had now closed the gap on Darling, didn't hesitate and split the lapped cars going down the backstretch. All Darling could do was watch the 28f shoot by to his left and follow him into turn 3. With Darling not being able to mount a charge, the 28f of Franek crossed under the checkered flags first and brought home win #7 on the year.

The United Racing Club has had many on the edge of your seat races in 2016 (Weller going wheel to wheel with Mark Smith at Big Diamond, Stillwaggon and Smith battling it out just a few short weeks ago at Bedford) and now tonight's last lap pass of Davie Franek on Kevin Darling.

Former URC regular Chris Coyle made his return to sprint car racing (close to 5 years since last URC start) on Friday night. Coyle who started 4th in heat #2, finished, 3rd and started 6th in the 25 lap main event, finished in the 7th position in the Fred Kennedy owned #56.