Smith Battles with Stillwaggon for URC Win at Bedford Speedway 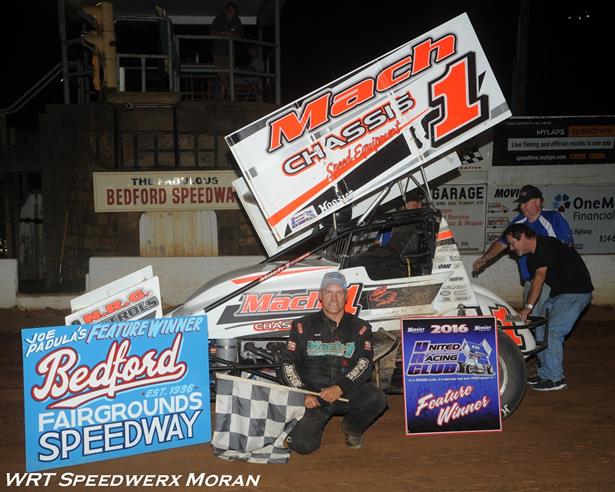 Smith Battles with Stillwaggon for URC Win at Bedford Speedway

The United Racing Club returned to the Fabulous Bedford Speedway on Friday night July 8th for the first time since 2014. A total of 14 URC Sprint cars were in the pit area with all the top notch teams in attendance. With two heat races on tap, heat race wins were won by the Franek Auto Sales #28f of Davie Franek and the B&G Auto Glass #22 of Troy Betts.

After the invert pill of "4" was drawn by Franek, the front row for the nightly feature event belonged to the Quality Auto Body #89 out of Burlington NJ Robbie Stillwaggon and the Mach 1 Chassis #M1 of Mark Smith. At the drop of the green flag, Stillwaggon jumped out to the lead over the M1 of Mark Smith. By lap 7, Stillwaggon and the leaders were into lapped traffic and with Stillwaggon increasing his lead before a lap 11 caution flag was shown for the Victory Auto Glass #63 of Josh Weller for a collapsed front end. Also heading pitside was the Erb and Henry Equipment #08 of Jason Clauss.

On the restart Stillwaggon used the inside lane to his advantage to regain the lead, but this time Mark Smith stayed with Stillwaggon constantly pressuring him for the top spot. Also on the restart the Valley Forge Inc, GEI Enterprises #5g of 9 time URC Champion Curt Michael moved around the #22 of Troy Betts and into the 4th position.

The Untied Racing Club will now head south for their next 2 races as they have a date next Saturday July 16th at the Delaware International Speedway and the following Friday July 23rd back to the Georgetown Speedway were Davie Franek picked up the victory in URC's first visit in 2016.