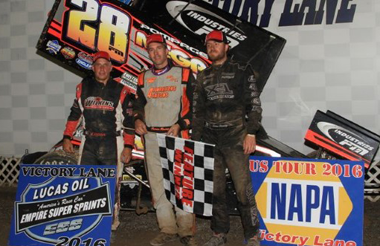 MALTA, NY – Steve Poirier made two statements Friday night during the Lucas Oil Empire Super Sprint event at Albany-Saratoga.  First he made late race passes on both Chuck Hebing and then leader Jason Barney to win his sixth A-Main of the season. Second, it marked ESS career win #59 which ties him with Mike Woodring atop the all-time win list.

The 25 lap Mach 1 Chassis A-Main all came down to a restart on lap 17.  Barney was in the lead and chose the inside lane with Hebing alongside and Poirier starting in third.

“Jason started the last restart and it was perfect for me.” Poirier mentioned on the restart that changed the outcome of the event. “I was able to get a good start and get by Cobra (Hebing), and get to the outside in turns one and two.  That helped me get a good lane and try to make a pass on Jason.”
As the two came down for lap 22, Poirier dove under Barney going into three and slid up beside him. “I made that move to see if I car could stick in the middle.” Poirier continued. “The next lap I had such a good run I knew I could slide him going into three.  It’s always tricky to do cause you don’t want your car to get into their left front but I knew I had enough momentum.”

The move indeed did work to perfection with Poirier then opening up a small lead in the final two circuits to get the win over Barney and Hebing.

As mentioned earlier, the victory did set a new chapter in ESS history.  For the Quebec native, win #59 times him with Woodring, an ESS Hall of Famer.  Even though Poirier has been with ESS since 2006 and never raced against Woodring, he is a man of history.

“This means a lot.  I can remember when ESS came to Quebec I always watched Mike, he always started in the back but he always would win. I really didn’t follow sprint cars much but I definitely enjoyed watching him race.” Steve went on. “It also means a lot to win and get #59 the way I did, to win over Jason and Cobra who are the best here is something special.

The victory netted Poirier over $1,800 but also closed him to Barney who leads both the overall Lucas Oil Championship Standings and also the NAPA Auto Parts US Tour standings which was offered on this night.

Barney took home another second place finish, which is always a feat in itself, but he felt he left something on the table.  “Yea, I think I gave it away.  Don’t get me wrong, Steve earned it in every way.  But, I just don’t think I made the right moves on those last few laps.” He went on. “I felt like I had to try to go early on that last restart to get to where I wanted to be on the race track. But, as it turned out, it wasn’t the right choice.”

For Barney, who does have three wins to his credit so far this season, it was another top five and another finish that keeps him in the overall point lead.

“We have had an exceptional year, we still have some work to do to get the results Steve has but I think we are equal as teams, we just need to get better or more consistent.” Barney quipped. “We have three wins with three different car and motors, so that makes you realize we are doing the right thing.  We just need that little extra.”

Hebing took third and while he thought he was as fast as the front two, that lap 17 restart set his fate as well.  “Jason did what he needed to do, he went quick on that start to keep his lead but it doomed me.  I was caught sleeping and Steve got by me.” Hebing noted and kept it simple. “Hey, it’s just one of those deals and there always the next race.

Danny Varin came from his 13th pace start to come home in fourth with pole starting Paul Kinney hanging on for fifth which kept him in third in the overall point chase.

Rounding out the top ten were Shawn Donath, Jessica Zemken, Cory Sparks, Parker Evans, who didn’t show up until just before the heats rolled out with hauler issues and Matt Tanner.

ESS/Albany-Saratoga Notes – A good field of 31 sprints filled the pits…Josh Pieniazek, Bobby Hackel Jr, Lacey Hanson, Will Hull, Matt Austin, Chris Donnelly and Kory Gurney made their first ESS starts in 2016…It was a short night for Donnelly with engine woes and was loaded early…Thanks to Elmo’s Speed and Supply, Opitz Transmissions and Maningo Chev, Buick, GMC for adding to the purse making for a healthy payout…Of Note, the July 24 event at Weedsport as been moved to Monday, Labor Day, Sept. 5th.