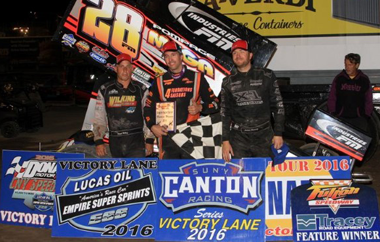 FULTON, NY – Steve Poirier has been consistent in the first two events of Lucas Oil Empire Super Sprint Donath Motor Worx Central New York Speedweek.  The consistency though had yet to bring him a checkered flag as he scored a pair of third place finishes in the opening rounds before Fridaynight’s rainout.

All the St. Mathieu de Beloeil, Que, driver needed to get back to Victory Lane was a return trip to the Fulton Speedway.  Poirier snatched the lead away from Jason Barney at the midway point of the Mach 1 Chassis A-Main.  He then held off Barney and Chuck Hebing for his third consecutive win with the series at the Oswego County track and his fourth career overall.  Poirier regained the overall championship point lead as well as adding points to his SUNY Canton Series and NAPA Auto Parts US Series totals.

“This track is awesome for me,” stated Poirier who collected $2,250 for the victory.  “We’ve had a lot success in the past.  I’m really happy with the endingtonight.”

Kelly Hebing started on the pole for the first time with the Empire Super Sprints alongside track Modified regular Larry Wight.  Wight earned the advantage at the green flag jumping to the outside of the speedway in turns one and two. Wight stayed planted to the top in turns three and four holding the lead.

Wight was in the top spot when the red flag was needed on lap six for Lee Sanders who flipped several times on the backstretch.  Thankfully Sanders was unhurt in the incident.

Once cars were pushed off and racing got back up to speed it was all Wight at the front of the field.  Wight held off Jason Barney as they raced through the first and second corners at the green.  At the same time Poirier lurked back in the fourth position on the speedway as he waited for an opportunity.
Keith Granholm's slowing car brought out another caution at lap 12.  While under the yellow, Wight’s right rear tire began losing air which forced him to head to the pit area handing the lead over to Barney.  As the field was realigned for the green flag, Wight’s crew was able change the tire.  He rejoined at the tail of the field.

Barney rode the bottom to lead at the halfway point after the restart but it was Poirier rocketing around Hebing to take second then challenging Barney.  Poirier went to the top on lap 14 to drive around Barney for the race lead as they raced off of the second corner.  Once he got the lead, Poirier stayed on the top of turns one and two while dropping right to the bottom of corners three and four.
“I changed the shocks and the wing under the caution,” said Poirier.  “On that restart I hit it good.  The adjustments that I made under the yellow were perfect.  Then I had the preferred lane.”

Poirier kept the lead while Barney now contended with the elder Hebing for second.  Hebing worked the outside with Barney refusing to give up on the bottom of the speedway.  It ended up costing him the spot on lap 20.

Sammy Reakes’ night ended on lap 23 as he caught a yuke tire in the first turn shattering the frontend on his No. 17.  The local favorite was towed to the pits after the contact.  Under the caution Poirier's motor starting showing some smoke.

A large plume of smoke came out of Poirier’s car on the restart.  The motor began popping as he came down the frontstretch.  Even with the motor going sour. Poirier was able to hold off Hebing and Barney as he led the final two laps for the win.

“We were pretty lucky there at the end,” mentioned Poirier.  “I think we were running on seven cylinders.  The track was so slippery that it might have helped me.  I didn’t know if I should get out leading but the engine survived.  Hopefully it’s not a major thing.”

Hebing had his best run of the week coming home in second.  The Ontario, N.Y., pilot has been strong but poor starting positions had made his week difficult.  On this night he was just a bit short of being able to challenge Poirier.

"Steve and I rolled the top a little better and Jason stayed down on the bottom and that hurt him,” commented Hebing.  “I started blocking Jason a little bit there at the end.  My car was good.  Steve was lucky the race was ending because he was having some problems there.  I just wasn’t quite good enough.”

Barney had his second consecutive Speedweek podium finish.  The Brewerton, N.Y., admitted that he should have made more of an effort to run up on the high-side of the speedway.  Not going there on the restart was the difference maker as he allowed Poirier to shoot around him for the lead.

“I’m a little disappointed with myself,” said Barney.  “I’m happy with the racecar.  We had fast race cars as Chuck was second and I was third with our X-1 Race Cars.  I just messed up on that last restart.  I had a lot of gear in the car.  I was hoping to ride around on the bottom and make a drag race out of it.  That top of one and two was really good.  I should have tried it more, but I lived and died by the bottom tonight.”

Bryan Howland was solid again at Fulton Speedway finishing in the fourth spot while Wight regrouped from his flat tire to advance all the way back up to fifth.