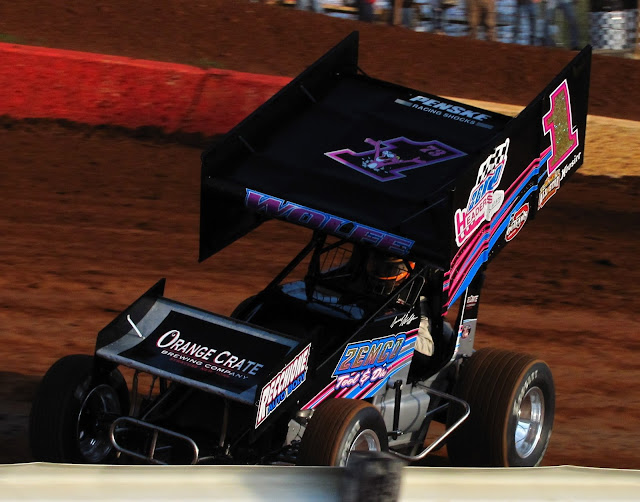 Lucas Wolfe used the middle groove to drive by leader Tim Shaffer and claim the PA Speedweek feature at Port Royal Speedway on Saturday night, worth $5,000.

In the Moon Shine Camo Rt. 35 Dirt Late Model Challenge Series, Jeff Rine motored to his second win in a row in the series after taking a series event last week at Selinsgrove Speedway.

The victory was the 13th of Rine?s career at Port Royal.

Mike Goodwin won the xtreme stock feature to close out the night.

Four-time All Star titlist Tim Shaffer of Aliquippa jumped into the lead at the start of the non-stop 30-lap PA Speedweek feature over polesitter James McFadden.

Shaffer approached the rear of the field by lap seven and at the same time Wolfe began slicing down the advantage that Smith had for second.

He muscled around Smith for the spot with 11 laps completed and quickly closed in on Shaffer and rather easily drove into the lead while pounding the middle lane through the first and second turns.

After getting the point in the event, no one could get close enough to challenge Wolfe for control.

Smith overtook Shaffer for second at the halfway point while eighth starter Brent Marks entered the picture at the front of the field simultaneously.

Marks took third at the same time Smith raced into second with Greg Hodnett up to fourth with 12 laps to go.

Blistering around the extreme top of the speedway, Marks was able to get by Smith for second with 10 laps to go but that?s as far as he would go in his advance.

Hodnett got by Smith for third with seven laps left but he too would advance no further at the front.

Wolfe took the checkers with a 1.373 second lead over Marks and Hodnett followed by Stevie Smith and Ryan Smith.

Dietrich left the event as the speedweek point leader with a 13 point lead over Hodnett for the title with just one event remaining.

Heats went to Dietrich, Marks and Hodnett with Steve Buckwalter taking the consolation.

Wolfe set quick time in time trials with a lap of 15.919 seconds.

But Hollenbeck?s pace was slowed just two laps into the race due to a spun car in the fourth turn.

Hollenbeck simply pulled away from Rine when action resumed and by lap nine Hollenbeck had built a 2.2 second lead over Rine as he neared the backmarkers.

With traffic in his path, Rine was able to close in on Hollenbeck on the 13th tour and just as  Rine moved underneath to challenge for the lead, Hollenbeck?s motor expired, handing control to Rine.

And from that point on Rine was in control despite a brief challenge from Zeigler on the restart.

Zeigler got under Rine in the second turn and raced him onto the backchute but Rine jetted ahead into the third corner.

The pace was slowed a final time with 11 laps to go, putting Zeigler and now Dylan Yoder on the leader?s tail.

Yoder pushed by Zeigler on the restart and tried to run down Rine but some brushes with the outside wall cost Yoder late in the event as Rine took the win by 2.843 seconds over Zeigler.

Mike Goodwin took the lead from Pete Leister on the third lap to drive to the xtreme stock victory going.

PRS 2016 ? Racing through a new decade with a new attitude!
Port Royal Speedway

The Only Place To See Super Sprints And Super Lates Every Saturday Night
Posted by Bill McIntyre at Sunday, July 03, 2016