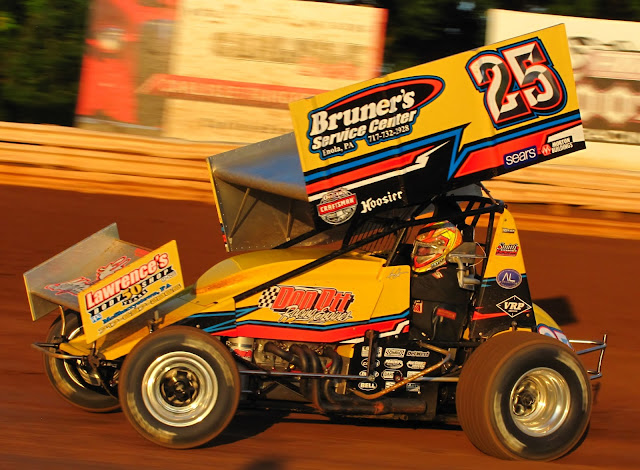 Mechanicsburg – Aaron Ott wired the field from the pole for the 410 sprint car feature win at Williams Grove Speedway on Friday night, holding off Danny Dietrich for the victory in a fast paced 25-lap main event.

In the 358 sprint main it was Matt Campbell claiming his first feature win of the season and third overall of his career at the oval.

The 410 sprint main took four tries at a start before the first lap could be recorded but once it was the following 24 clicked off non-stop.

One of the initial start stoppages was for a turn over by Doug Esh who had connected with Lucas Wolfe.

Brent Marks started second in the race but got passed by Cory Haas when the first lap was completed while Marks maintained the third spot.

Leader Ott hit lapped traffic on the 12th tour with Brock Zearfoss and Danny Dietrich in the top five.

A hectic pace on a quickening cushion really shook up the front runners during the final 10 laps as the race waged through heavy traffic.

Eleventh starter Brian Montieth had worked his way up to sixth with 10 laps to go and went for a big slide job on Danny Dietrich and Brock Zearfoss that backfired with him loosing spots instead while Dietrich capitalized on the skirmish to bolt into third from fifth.

With Montieth left to regroup, Dietrich set his sights on the rest of the front runners and overtook Haas for second with six laps to go.

With four to go Dietrich was clearly poised to take a stab at the win and the pair crossed the stripe on lap 22 nose to tail.

At first upon entering the first corner, Dietrich faked to the outside then quickly swerved left and under Aott for the lead, which he grabbed momentarily until his car caught the cushion and bicycled, allowing Ott to zoom back by just underneath.

The bicycle by Dietrich gave Ott enough breathing room afterward to run to the win, although only taking the checkers by .554 seconds.

Marks was third with a recovering Montieth fourth and Haas in fifth.

Cody Keller led from the start of the 20-lap 358 sprint main with Brent Shearer in tow and saw the pace slowed for the first time with 12 laps to go.

The caution flag erased a nice advantage built by Keller over the field and placed Matt Campbell, who had just taken second on the eighth tour, in a challenging position for the resart.

And once Campbell was able to slip by Keller for the lead, he drove away for the checkered flag.

Kevin Nouse got around Keller for second in the final turns with Keller holding on for third followed by Doug Hammaker and Adrian Shaffer.

Shaffer was the Wee Bee Audio And Video Hard Charger, driving from 18th to fifth at the finish.


Keep up to date on all the latest speedway news and information by visiting the oval’s official website at www.williamsgrove.com or by keeping up with the oval on Facebook or Twitter.