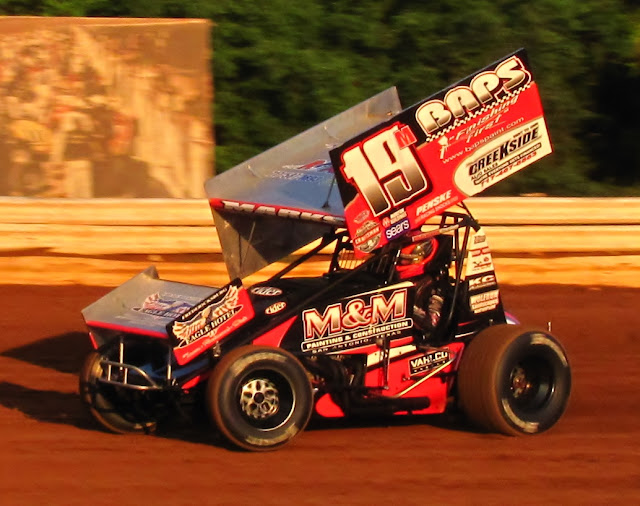 PORT ROYAL, Pa. ? One week after the Jonestown Jet Brock Zearfoss won the sprint car main at Port Royal Speedway, the Myerstown Missile Brent Marks came in for a landing in victory lane, scoring his second oval checkers of the year, worth $3,200 in a flag to flag performance.

Elsewhere, Dover?s Coleby Frye made it back-to-back wins in the super late model division, holding off Mike Lupfer for the hard-fought victory amid a stellar field.

In the 305 sprint main, Tyler Reeser won his second of the season at the track as did Mike Goodwin in the xtreme stock divisions.

A total of 102 race cars jammed the Port Royal pit area for the night of action.

Ryan Taylor and Marks shared the front row for the 25-lap 410 sprint car feature and Marks took command at the drop of the green.

A caution flag on the fourth circuit wiped out a two second lead built up by Marks but Esh could not contend on the restart.

Marks entered the rear of the field with 10 laps away chased by Esh and although the rest of the event was fought through traffic, Esh was never really able to get close enough to attempt any sort of challenge.

But even with firm command, Marks weaved through traffic during the final five laps, making some daring and breathtaking moves that could have saved his win or ended his run, depending on pure fate.

Marks took the victory, the seventh of his overall career at Port Royal Speedway by 1.714 seconds.

In victory lane Marks praised speedway track crews for the surface that has produced excellent racing all season long and went on to proclaim the oval, ?The premier track in Pennsylvania.?

Both Zearfoss and Cisney drove by Greg Hodnett to secure their spots.

Lupfer pounded his patented low groove the entire distance of the event and wrestled the lead away from Knaub on the sixth tour.

But third starter Frye was running as high around the track as Lupfer was low and he used the groove to get by Knaub for second with eight laps in the book.

Once he got cooking around the top side, Frye was able to vault around Lupfer for the lead on the ninth lap however Lupfer kept Frye in his sights for the rest of the race.

One miscue by Frye would have netted Lupfer the lead again and at times Lupfer was able to get inside Frye but his bottom lane just never quite came in good enough to put him back out in front.

Frye was victorious by 1.363 seconds over Lupfer, Dan Stone, Knaub and Chad Hollenbeck.

Drew Ritchey drove from his fourth starting spot into the lead on the fourth lap of the 18 lap 305 sprint main, overtaking Scott Ellerman for control.

The first 11 laps of the feature threatened to allow Ritchey to get away for his first ever oval victory but a caution flag bunched the field and placed Jeff Miller and Tyler Reeser on his tail for the restart.

Reeser pounced on Miller for second at the new green and then blasted past Ritchey for control a lap later.

Once in front Reeser pulled away to his second win of the year at the track.

Miller then also got around Ritchey for second, where he would finish.

After a first lap red flag in the xtreme stock feature for some hard backstretch contact, Mike Goodwin led all 15 laps of the feature to win over Pete Leister.

Leister started 12th in the field and raced his way to the front while Bill Powell ended the race in third followed by Kevin Imes and Jason Zook.