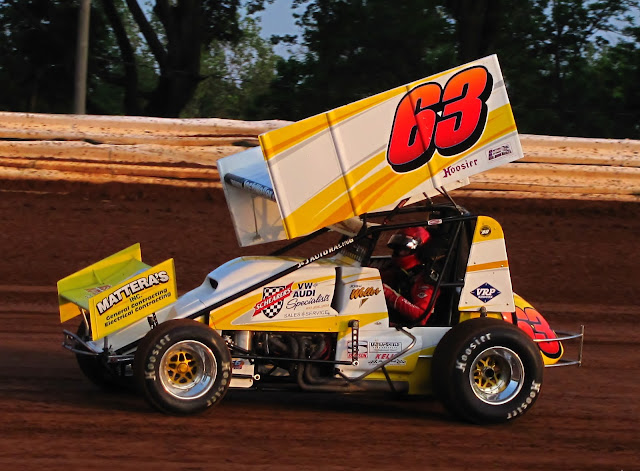 Franek, the winner in URC action Friday night, started on the pole and led lap one before Mark Smith went out front and led the next two circuits.

Franek regained the lead from Smith on the fourth tour and was leading Smith on the ninth lap when Smith slowed on the speedway to bring out a caution.

Following a caution on an attempted double file restart, a single file restart saw Weller, of Mertztown, PA jump to the outside of Franek and won the race off the second corner to take the lead  with 11 laps down and he would never look back in scoring the win aboard his No. 63 Sprint.

Zechman started on the pole and would dominate the feature, becoming the fifth different winner this season as he took the checkered flag over Shaun Jones, ninth-starting and point leader Randy Christine, Jr., Steve Billet and 16th starter Chase Billet.

Heats for the 19 late models were won by Shaun Jones and Cameron Benyou.

Carroll led lap one before Justin Cardasso led the next two laps but Carroll went back out front on lap four and drove to the win over Cardasso, Daryl Sipe, Travis Brown and Lee Redman.

Cardasso and Carroll were heat winners for the 13-car field.

It will be another big two day racing program at Susquehanna Speedway as the Heavy Equipment Loaders & Parts Inc. /Nouse Signs 358 Sprint Summer Series will highlight the Saturday, August 20 racing program. The Credit Connection Auto Sales Super Sportsman, Xtreme Stocks and Classic Car Series will share the program with the 358 Sprint cars. Pits open at 4PM, Grandstands at 5PM and Racing at 7PM

Then on Sunday, August 21, the BAPS Coatings & Supplies 410 Sprint Car Series will be back in action as the 410 Sprint cars go in the Justin Snyder Salute to the Troops event. The Sprint cars will be going after the $5,000 top prize. The PASS/IMCA 305 Sprints will also be on the program. Pits open at 4PM, Grandstands at 5PM and Racing at 7PM.