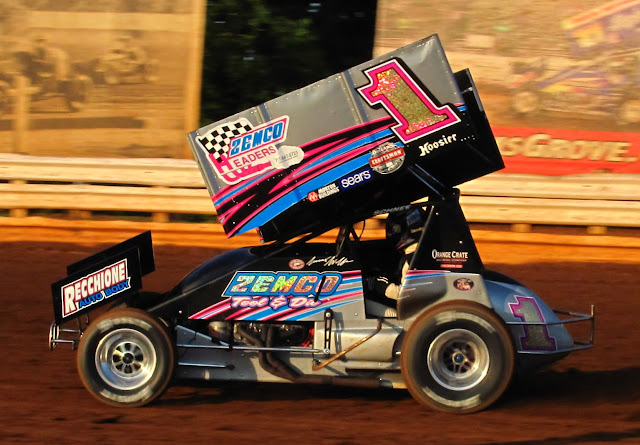 MECHANICSBURG, PA - Lucas Wolfe usually only drives the Zemco sprinter in time trial races at Williams Grove Speedway.
But, Friday night, Wolfe was there for a regular show in the John and Pee Wee Zemaitis-owned Zemco No. 1 in preparation for next week’s Knoxville Nationals.

He made it pay off, too, as he dominated the Lawrence Chevrolet Sprint car feature for his 15th career Grove win and second of the season earning $3,600.

“We were getting tight on time with Knoxville coming up next week and we never had the opportunity to run the car that we plan on running there,” said Wolfe.

“We have a car and an engine that we think will be our best option to run there and we wanted to get some laps with it and make sure it was okay.”

It was more than okay as it was fast right out of the box.

“The car felt good all night right from the first lap in warm-ups,” said Wolfe. “It has been tricky here. It has been hard to get a good feel even if you’re really quick. Tonight, I was good right from the start. In the feature, the closer you get to the front, generally you feel better.”

Rodney Westhafer started on the pole and got the jump on Aaron Ott to start the 25-lap main event. A first turn crash involving Frankie Herr and Jim Shuster stopped the race with one lap completed.

Westhafer got a good restart as Doug Esh passed two cars moving into fifth. Fifth starter Wolfe used an inside move in turn four and drove by Cory Haas and into third.

Last week’s feature winner Freddie Rahmer spun in turn three and collected Kody Lehman, who flipped bringing out another red flag. Ott pitted out of second spot as the cars were lining back up for the restart.

Wolfe ducked under Westhafer for the lead in turn one and would take it. Westhafer’s inside top wing panel came off in turn one bringing out the caution. Westhafer pitted and Wolfe was the leader for the lap three restart.

Brian Montieth drove by Alan Krimes and Esh to take third on the restart. Krimes passed Esh and was up to fourth as Wolfe streaked away from Haas.

Wolfe reached slower traffic with a three second lead. Haas and Montieth split two lapped cars as they raced into turn three as they tried to keep pace with Wolfe.

Montieth would take second from Haas in turns three and four with eight laps to go, but was 4.2 seconds behind the leader. Krimes would grab third from Haas over the final laps.

Wolfe scored the win by 2.981 seconds over Montieth. Krimes, Esh and Haas completed the top five.

“I was concerned when some of those yellows came out because I was close to advancing some spots, but those guys had their own misfortunes and it worked out okay for me anyway,” said Wolfe. “We were fortunate to take advantage of a good opportunity tonight.”

Heat races for the 26 cars were won by Dietrich, Hodnett and Rahmer. 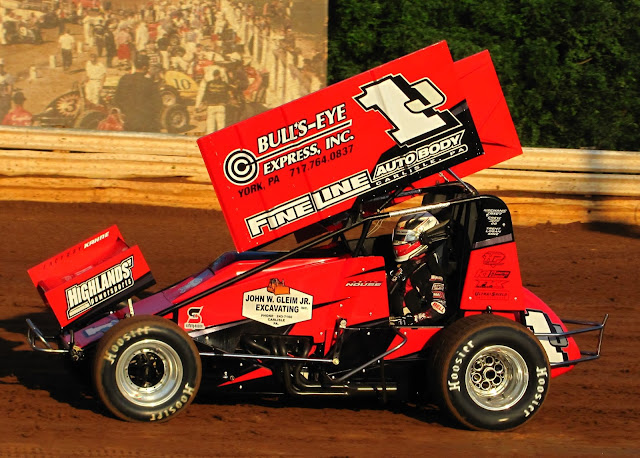 In the Nouse Signs and Graphics Summer Series for the 358 Sprints, it was Kevin Nouse taking the lead on lap 11 and going on to score the victory.

Todd Reed led the first four laps of the 25-lap main event before Matt Findley drove by. Kevin Nouse was up to second from ninth and Eric Parker into third. A red flag stopped the race for Cody Keller’s second turn flip with seven completed.

Findley was able to maintain his lead, but a five-car crash in turn three brought the red flag out again with nine laps completed.

Nouse and Findley swapped the lead in turns three and four on the restart. They did again in turns one and two, but this time Nouse drove into the lead off the inside of turn two.

Nouse had a comfortable lead in lapped traffic when the caution flag flew with three laps to go giving him a clear track to the finish.