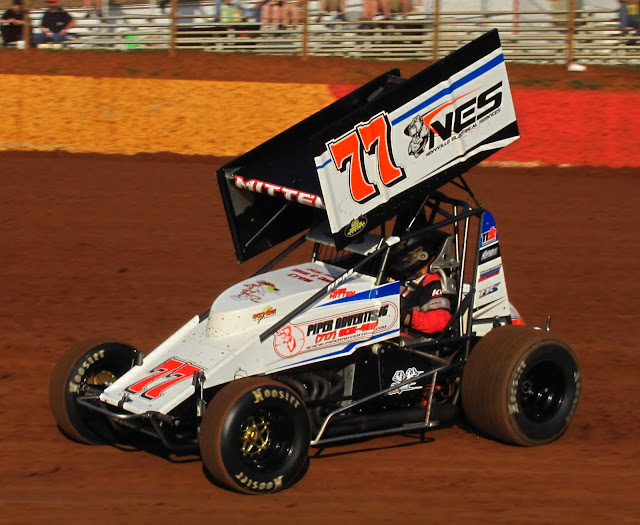 The Newville, PA racer turned in an impressive heat run effort to put himself into the handicapped starting spots for the 25-lap feature and then drove from ninth to first in just 13 laps aboard his RPM Chassis, Newville Electrical Services No. 77 . Once out front, Mitten ever looked back in scoring his second win at the track this season and third overall on the Super Sportsman circuit.

Mitten’s win moved him to within 30 points of the track point lead behind Scott Geesey, who finished runner-up in Saturday night’s feature after lining up in the 10th spot.

Teddy Thomas, who led the first 12 laps ended up with a season best third place finish ahead of Paul Miller and 14th place starter Scott Dellinger.

Heats for the 31 car Sportsman field were won by Thomas, Steve Fannasy and Foster with Tom Wyckoff taking the consolation win.

With nine cautions slowing the event, including six during the first seven laps, Stoudt worked his way to the front after starting seventh.

Shaun Miller led laps one through six before yielding to Charlie Potts, who led until lap 18 when Stoudt grabbed the lead and drove to the feature win over Potts, Miller, two-time winner Randy Christine, Jr. and 21st starter Steve Billet.

Late Model heats were won by Christine, Taylor Farlling and Dan Zechman. Donnie Broderick was the consolation winner as 26-cars were in competition.

Heats for the 36 street stocks were won by Jim Palm, Sigler, Diehl and Potts. Richards was the consolation winner.

It will be another big two day racing program at Susquehanna Speedway as the Heavy Equipment Loaders & Parts Inc URC/358 Sprint Challenge on Saturday, August 13. The 358 Late Models, Road Warriors and BFTP Vintage Cars are also on the program. It will also be KIDS Night. Pits open at 4PM, Grandstands at 5PM and Racing at 7PM

Then on Sunday, August 14, the USAC Midgets invade the speedway for a night of wingless open wheel action joined by the Street Stocks. Pits open at 4PM, Grandstands at 5PM and Racing at 7PM.

There will also be another Test & Tune at the speedway on Wednesday, August 10 beginning at 6PM.