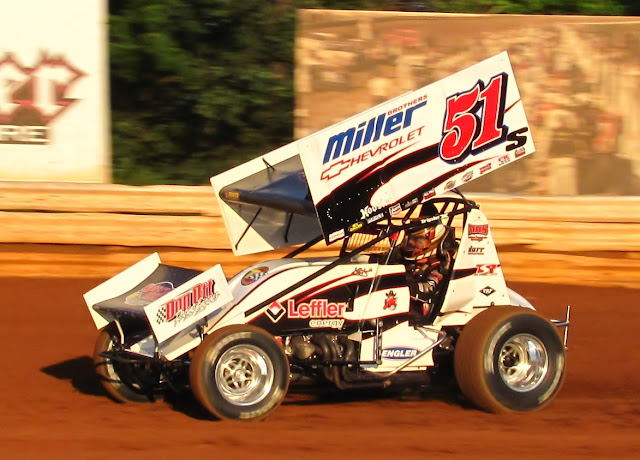 PORT ROYAL, Pa. ? Stevie Smith took advantage of the chances he was given on Friday night to score victory in the All Star Circuit of Champions Night Before the Tuscarora 50 at Port Royal Speedway, taking $5,000 for the win, his third in the history of the event.

Greg Hodnett earned the pole for the 30-lap Night Before the 50 feature event and took the lead on the first lap over Brock Zearfoss an sixth starter Lance Dewease.

Dewease drove by Zearfoss on the third lap, showing strength early as Hodnett began running down the rear of the field.

The leader entered the backmarkers on the seventh circuit and at the same time Dewease had caught him for control.

Running the low side of the speedway, Dewease drove into the lead on the ninth lap and began jetting away, leaving the rest of the field to scrap for second.

And then just as suddenly as he took control and was already out to a near one second advantage, he slowed to a stop on the backchute with 20 laps to go, handing control back to Hodnett with third starter Stevie Smith now in second.

Hodnett was only able to hold Smith off for one lap after action resumed as the Oklahoma driver blasted the top to take control on the backstretch on the 12th circuit.

Smith then was able to creep just far enough ahead to keep Hodnett from making any bids for control however he failed to drive away from the field.

With six laps to go, the pace was slowed when Danny Holtgraver and Brent Marks connected in the first corner however the final restart failed to produce a contest for the lead as Smith again kept Hodnett just far enough behind to prevent a stab for the lead.

Seventh starter Lucas Wolfe ended a race long battle with Dale Blaney for third with the spot, followed by Blaney and Danny Dietrich.

Heats went to Haudenschild, Wolfe, Zearfoss and Dave Blaney.  Hodnett won the dash and Mike Wagner took the B Main.

Fourth starter Kyle Hardy took the second spot away on the sixth lap and began to challenge Brenneman for control with eight laps in the book.

Hardy was able to get alongside Brenneman and nose into the lead at times using the outside lane but a smooth Brenneman on the low side maintained his composure to thwart the bids and indeed drive out to a lead of over two seconds as Jeremy Miller took second from Hardy with 10 laps to go.

But Brenneman?s 2.3-second lead was erased with seven laps to go thanks to a final caution flag and that?s when Miller took his shot.

Using the outside lane, Miller applied heavy pressure for control when action resumed and he made it back to the stripe to be scored the leader with six laps to go.

Brenneman attempted a comeback for the win but Miller was too tough to be caught, taking his second career victory at the oval.