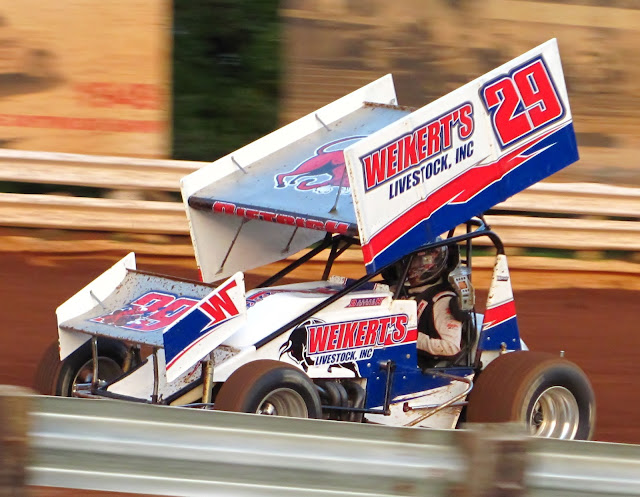 Ironically, both wins came aboard a replica Weikert?s Livestock No. 29 sprint car are his only career victories at the track.

Port Royal driver Dylan Cisney had the pole for the 25-lap Labor Day Classic for sprints and took the lead on the first lap ahead of Dietrich and defending event winner Brent Marks.

Marks got by Dietrich for second on the second tour and quickly ran down Cisney to make a pass for the lead with four away.

Once in front, Marks began driving away from the field, jetting around the first and second turns using a narrowing topside moisture strip that got a bit too narrow on the 10th tour when he hopped up over it and slammed the outside turn two wall.

That misfortune sidelined him for the rest of the event and handed the lead to Dietrich with Cisney now second and ninth starter Greg Hodnett up to third.

Hodnett got around Cisney for second with 11 laps to go but had to run down Dietrich who had built up over a straightaway lead by that point.

But steadily Hodnett did cut away the advantage to be caught up with the leader with a lap to go.

However a final lap clash never materialized as Dietrich stayed just far enough out of reach to prevent a last ditch, final turn effort by Hodnett to steal the win.

The victory was Dietrich?s seventh overall this season in area action.

Some 38 four cylinder pure stocks entered competition and 36 of them started the 15-lap feature with Ryan Peer, who started 37th, taking the lead with four laps to go to seal the win.