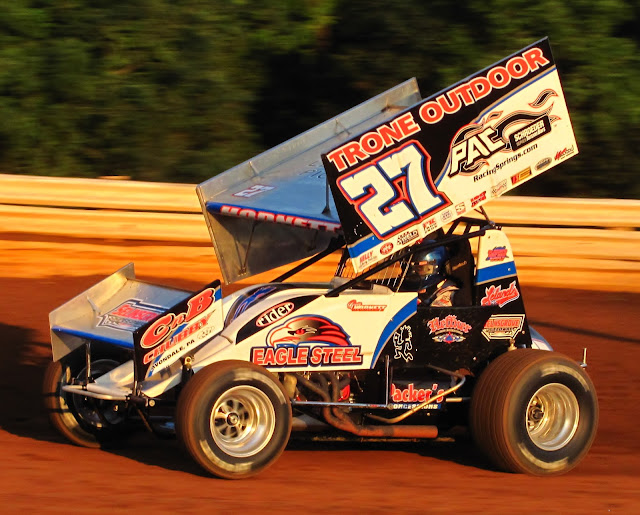 MECHANICSBURG, PA – Greg Hodnett went into the night as the Williams Grove Speedway point leader, but hadn’t won a 410 sprint car feature at the track since the end of March.

He changed that stat Friday night as he took the lead from Lucas Wolfe in lapped traffic and controlled the final 14 laps to win his first 410 feature at the track since the second race of the season. He did win three features in the 360 sprints over the course of the summer.

Things were going Hodnett’s way, but a header pipe broke off with three laps to go affecting the car’s performance.

“We lost a lot of horsepower, but being out in front we had a huge advantage to dictate when to take off and how hard I could run,” said Hodnett, of Spring Grove.

“We had a lot of things go our way. We were lucky to finish and had a pretty good car. We are pretty happy going into next week.”

Wolfe started on the pole and drove into the lead over Hodnett to start the final 25-lap main event before next weekend’s Champion Racing Oil National Open.

Wolfe led by about a half-straightaway with five laps completed as they raced around a fast cushion.

As Wolfe closed on the back of the field, Hodnett closed on him with 10 laps completed. Hodnett made an inside move off turn four to take the lead the next time around.

“We caught two guys that were running the top in lapped traffic,” said Hodnett. “Lucas had to momentarily check-up getting into turn three. I shot to the bottom and waited to hit the moisture coming down the straightaway and it worked out for us. Sometimes, it’s better to run second in those situations.”

The red flag stopped the race with 14 laps completed for a hard third turn crash by Danny Dietrich, who walked back to the pit area. A major clean-up was needed as Dietrich’s sprinter leaked fuel across the third turn.

Hodnett led the field down for the double-file restart as the Grove used the World of Outlaws format for the race. Lance Dewease pitted from the fifth spot before the restart.

Wolfe tried to take the lead back, but Hodnett slammed the door as they raced into turn three. Stevie Smith and Wolfe raced hard for second as Hodnett pulled away. Cory Haas drove by Aaron Ott and into fifth.

Hodnett streaked away from the field as Wolfe secured second from Smith. The race was slowed with three laps to go for debris on the race track (Hodnett’s header).  It was a single-file restart because it was less than five to go.

Wolfe stayed with Hodnett following the restart, but it was the Williams Grove point leader picking up his first win since the end of March over Wolfe, Smith, Rahmer and Haas. Doug Esh, who helped assist Dietrich from his crashed car, finished sixth.

Dewease set fast time over the 30-car field with a lap of 16.532 seconds. Smith, Hodnett, Wolfe and Rahmer completed the top five qualifiers. 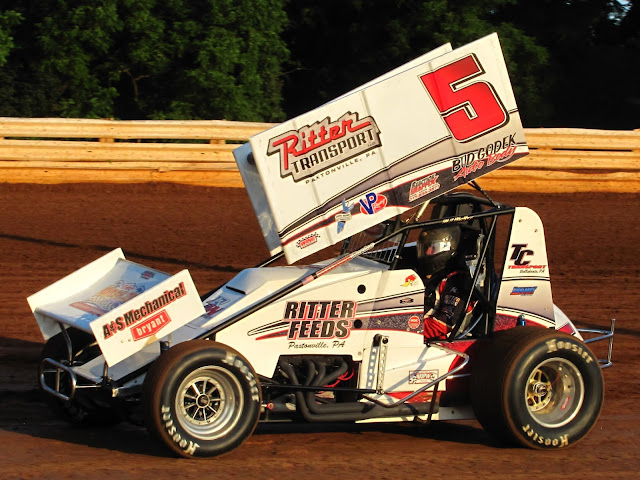 In the 358 sprint feature, it was Phil Walter of Beavertown grabbing the race lead from Dave Thrush with nine laps completed.

Walter streaked away from the field and had a 2.5 second lead with two laps remaining when the red flag stopped the race for Eric Parker in turn three. He was okay.

Jordan Givler worked on Walter for the lead as track champion Kevin Nouse made it a three-car race for the win.

Nouse got by Givler in turn one and put a last lap slider on Walter in turns three and four. Walter turned his car back under Nouse and just beat him back to the checkers to get the win for his first ever triumph at the historic oval despite a decades-long career.

The three-day Champion Racing Oil Williams Grove National Open sanctioned by the World of Outlaws begins Thursday night with a $10,000 to win main event. An identical program will be run Friday night. The 40-lap National Open will pay $50,000 to win on Saturday night.