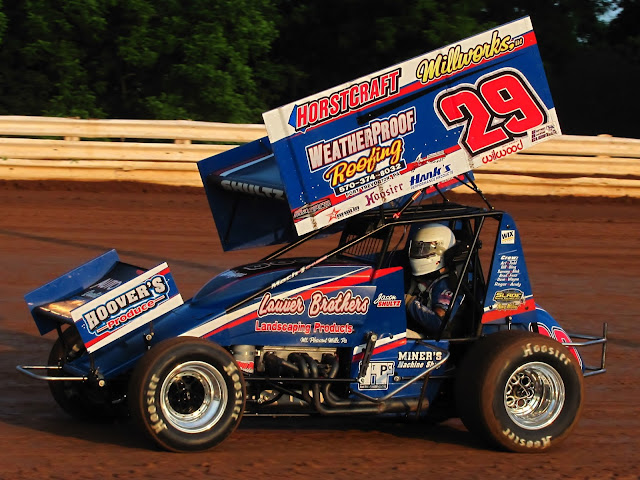 SELINSGROVE, Pa. – The 360 sprint cars, super late models, pro stocks, and roadrunners returned to Selinsgrove Speedway Saturday night to complete the Aug. 27 features that were postponed due to a power outage that affected area communities and the speedway.

The features completed the regular points racing season at the Snyder County oval for 2016 with Mark Smith of Sunbury clinching the 360 sprint car title, Jeff Rine of Danville the super late model championship, Brad Mitch of McClure winning the pro stock division crown, and Keith Bissinger of Orangeville wrapping up the roadrunner title.

Jason Shultz of Carlisle and Hayes Mattern of Beavertown were first-time winners this season at the track in the 25-lap 360 sprint car and super late model main events, respectively. Tommy Slanker and AJ Hoffman of Richfield split the wins in the 15-lap pro stock races, while Keith Bissinger closed out the roadrunner racing season with a victory in the 12-lap main event.

Selinsgrove Speedway will be right back in action Sunday night over the Labor Day holiday (Sept. 4)  with the Craftsman World of Outlaw Late Model series in the Jeff's Auto Body and Recycling Center Late Model National Open. The track’s crown jewel event for the super Late Models will pay $8,000 to win and run 40 laps. The Limited Late Models will also be on the night’s racing card. Darrell Lanigan is the defending winner of the event and will look to extend his three-race winning streak in the Open.

The 2016 season will close out Saturday, Sept. 17, with the Jim Nace  Memorial 34th Annual National Open for the 410 Sprint Cars. The Late Models will join the 410 Sprinters in the season finale at 7p.m.

The Selinsgrove Speedway season awards banquet will be held November 5 at the Genetti Hotel in Williamsport. Tickets will go on sale in September.

Colby Womer jumped into the race lead at the drop of the green flag in the 25-lap Newville Family of Companies 360 Sprint Car main event while Jason Shultz charged from his eighth starting spot. Eric Tomecek was quickly into second and Shultz had moved to third on lap four. Tomecek and Shutlz made up a lot of ground on Womer as they approached lap traffic.
Tomecek was the first to go by Womer followed quickly by Shultz, who on the next lap, would go by Tomecek to secure the top spot. A red flag on lap 18 was the first time the race lost green flag status as Ryan Kissinger flipped. He escaped injury.

With the field bunched up for the restart, Tomecek used the restart to challenge Shultz a few times, but never more than in turns 3&4 on the final lap. Shultz got the run he needed to drive away to pick up his first win at the track in over two years. The checkered flag came over Tomecek, Derek Locke, Colby Womer, and Mike Walter.  Michael Walter II recovered from an early race flat tire to finish in sixth. He raced across the line ahead of Eric Parker, Larry Kelleher, Darren Schott, and Charlie Anderson. Heat race wins on Aug. 27 went to Womer and  Walter.

The Jeff's Auto Body and Recycling Center Super Late Model feature race was the last chance for teams to tune up leading into the Sunday’s World of Outlaw race. Hayes Mattern looked to kick the monkey off his back and take his first win of the season. Mattern jumped to the race lead from his front row starting spot. Bryan Bernheisel quickly looked to be the car to beat as he raced into the second position from his seventh starting spot. By lap 20 Bernheisel had pulled to the rear bumper of Mattern's number 9.

Soon the race for the lead was into lap traffic and Bernheisel really put the pressure on Mattern. With two to go Mattern made a bold move around two lap cars that left a gap between he and Bernheisel. Bernheisel was not done yet. He closed the lead up enough that in the final corner he could pull even with Mattern coming to the checkered flag. The two made contact out of turn four as the drag race to the finish began. Mattern held on by just .025 seconds for the win.
Bernheisel earned a hard fought second place. Tony Adams closed out the podium finishers ahead of Jeff Rine and Steve Campbell. Matt Cochran, Luke Hoffner, Jim Yoder, Dave Zona, and Save Stamm made up the rest of the top ten finishers. Bernheisel and Cochran were the heat race winners on Aug. 27.


When the green flag came out in the A&A Auto Stores Pro Stock main event, Brad Mitch locked up the 2016 Pro Stock points' championship. Mitch looked to end the championship bid with a victory when he took the race lead away from Brandon Moser on lap 5. Tommy Slanker had other ideas of how the season would end. Slanker used an inside line to go by Mitch on a lap 11 restart and opened up a lead. A yellow flag came out again on laps 14 setting up a one lap shootout for the win.
Slanker showed the way into turn three when Mitch threw a big slide job going for the win. Slanker was able to make the move back into the race lead to grab his second win of the season. Moser was actually able to sneak under Mitch for second while Mitch settled for the third spot. AJ Hoffman and Curtis Lawton were the rest of the drivers in the top five. Nate Herman finished sixth followed by Shaun Lawton, Lori Croop, Matt Wilson, and John Troxell. Hoffman and Stroup were winners in the heat races.

Keith Bissinger has claimed all but three wins this year in the A&A  Auto Stores Roadrunners. Saturday night he hoped to celebrate his championship run with a victory. Bissinger led much of the feature event, but a late race yellow gave runner up Brian Johnson a chance to grab the race lead away. Bissinger admitted he was running lower on the speedway thinking the inside was faster, but Johnson was making the outside line work. Johnson pulled even with Bissinger going into
turn one of the final lap and then crossed over the race leader coming to the checkered flag. At the flag stand the drag race finish went in favor of Bissinger. Johnson was second ahead of early race leader Will Brunson. Tom Underwood and Smith cope were fourth and fifth. Butch Shaffer, Cory Collier, Dustin Snook, Miranada Minium, and Jim Collier rounded out the top ten finishers.

In the night cap the Pro Stocks returned to complete a feature event from July 3rd. AJ Hoffman took the race lead early and dominated the 15 lap feature. The win moved him into sole possession of the number one slot of the Pro Stock win list. The win was Hoffman's 46th career victory. Matt Wilson followed him across the line along with Nate Stroup, Peanut Heintzelman, and Bill Conrad.