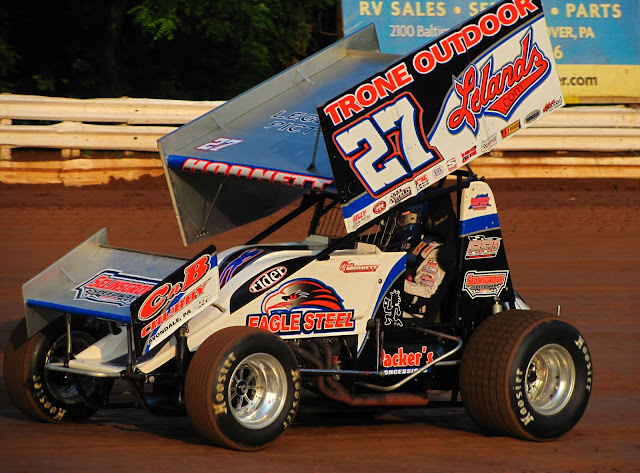 Mechanicsburg – Greg Hodnett won his third sprint car feature of the season at Williams Grove Speedway on Friday night, scoring $3,800 for the 25-lap victory that was the 66th of his career to date at the oval.

In the 15-lap super late model main, Bryan Bernheisel of Lebanon scored a $2,000 win in a special “Run What Ya’ Brung” event.

Cory Haas started on the pole of the 410-sprint car main and led only the first two laps before Hodnett took over for what would be the win.

A volley of caution flags on laps three, four, seven and eight would hamper Hodnett’s pace at the front and repeatedly give Haas a second chance at the lead but Hodnett was up to the challenge each and every time.

Finally after the lap nine restart, the final circuits went non-stop with Hodnett amassing a 3.6 second lead by the halfway point while racing through traffic.

Invader Logan Schuchart was the show of the race after starting 24th in the field.

The World of Outlaws regular was already up to 12th on the fourth lap.

On the lap eight restart, Schuchart blasted to the outside of Tim Wagaman and Lance Dewease to take over eighth before further advancing his cause.

At the halfway point he was up to seventh and with 10 laps to go, he was sitting sixth.

And he would not stop there as he rallied into the top five, getting around Brian Montieth with seven laps to go.

But that would be the end of his advances as he then fell backward and off the pace during the final four laps.

In the end, Hodnett took the checkers 5.584 seconds ahead of closest pursuer Freddie Rahmer, who took the spot on the 12th lap.

Bernheisel led all 15 laps of the super late model main with Coleby Frye racing in second for the majority of the event before withdrawing during the final few laps, handing second to Gene Knaub.

With what amounted to a sail mounted atop his late model machine, Bernheisel was turning laps in the 17-second bracket during the main event, which was within the same bracket as sprint car winner Hodnett during the sprint car main.

Frye also had the sail-like feature atop his mount.

Williams Grove Speedway closes the season next Friday, October 14 at 7:30 pm with the running of the 54th annual Champion Racing Oil National Open, sanctioned by the World of Outlaws Craftsman Series sprint cars.