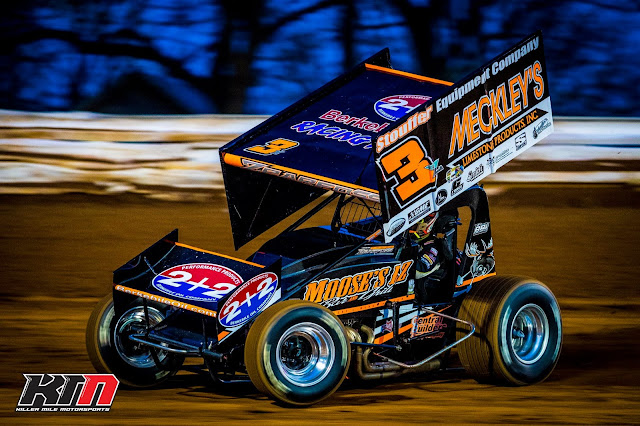 PORT ROYAL, Pa. – Upstart driver Trent Brenneman of Port Royal turned in an impressive performance resembling that of a seasoned veteran in the 22-lap super late model main at Port Royal Speedway on Saturday night, out-dueling late model star Jeff Rine for the first victory of his career at the historic oval where his grandfather Butch Renninger drove to numerous wins and track titles.

In the 25-lap 410 sprint car main, Brock Zearfoss of Jonestown held off TJ Stutts to record his first win of the year at the track while Tower City’s Shaun Miller won the econo late model main to close the night.

Both Brenneman and Rine started on the front row of the super late model main and the pair spent the first five laps exchanging the lead at will with each set of turns.

Rine would repeatedly overtake Brenneman for control in the second corner while Brenneman would use the bottom to perfection in the fourth turn to lead the majority of the laps at the line with the exception of the third circuit when Rine’s nose was ahead at the stripe.

Only a caution flag broke up the neck and neck action just before lap six could be scored but the battle continued when action resumed.

Brenneman was holding a .367 advantage over Rine on the ninth tour when another caution bunched the field.

And again a war on wheels was waged when action resumed with Brenneman holding his low line to keep control despite constant powering blasts on the top side by Rine and then finally on the 11th tour Rine was able to take the lead by a scant .014 seconds at the stripe.

After that Brenneman kept trying to work his bottom groove but with time he strayed to the topside trying to find more speed and that he did as lap after lap he pulled closer to pacesetter Rine’s rear deck lid.

Brenneman was clearly gaining significant ground as he blasted off of the cushion in the fourth turn and when the pair shot onto the frontstretch on the 19th lap Brenneman crossed over in the middle of the straightaway, pulling off of Rine’s bumper to use a lapped car as a pick as he entered the first corner.

When Brenneman went low on the backmarker, he pushed that car up the track in front of Rine and that allowed him to secure control once more, this time again scored the leader with just two laps to go.

Brenneman was then able to put enough daylight between himself and Rine to focus on two smooth laps and while that was happening, Coleby Frye came blasting under Rine for second with a lap to go while also closing on Brenneman.

But the win went to Brenneman by .813 seconds and a joyous victory lane erupted for the ever-improving local driver with deep ties to the oval.

Rine and Frye were the first people into victory lane to congratulate Brenneman on his victory.

Heats for the 23 late models went to Dickson, Frye and Friese with Chris Casner setting fast time in time trials with a lap of 18.804 seconds.

The first caution flag unfurled with three laps recorded when Doug Esh looped his car in the fourth corner while trying to avoid a collision with Mike Wagner as the pair raced for fifth.

Esh rejoined at the rear and eventually came back to finish eighth.

The ensuing restart saw Aaron Ott get sideways in the second turn, collecting Jimmy Seger who turned over as Ott righted his car and drove away.

TJ Stutts took second from Tyler Bear on the restart and would follow Zearfoss the rest of the distance.

At the halfway point Zearfoss held a 4.858 second lead over Stutts however a red with three laps to go stopped the pace again, this time for Curt Stroup who turned over after slamming into the inside first turn barrier.

The restart gave Stutts a chance at a flyer but Zearfoss was just too far around to complete the slider, instead forcing Stutts to ride home second by .449 seconds.

Rick Lafferty took third from Mike Wagner on that final restart with Wagner ending up fourth and Aaron Ott fifth.

Shaun Miller started second in the 18-lap econo late model main and held off Eric Irvin for the win after Irvin chased him for the entire distance.

Todd Snook took third at the finish after moving into the spot with three laps to go.

Stay up to date with all Port Royal news and information by visiting the oval’s official website at www.portroyalspeedway.com or by following the track on Facebook or Twitter.