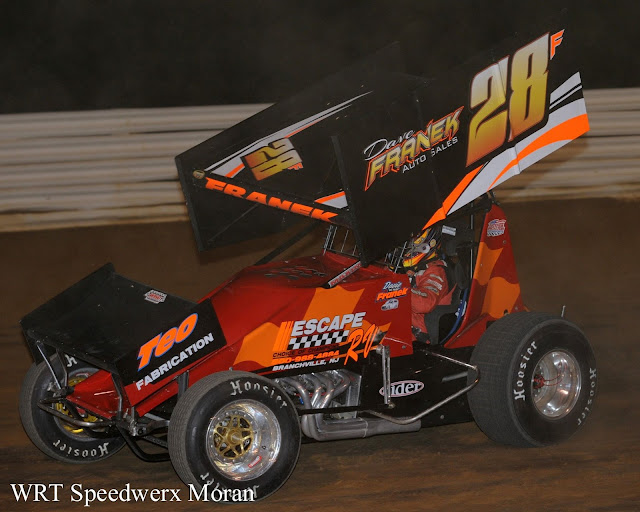 Davie “No Panic” Franek used a lap 8 pass of race leader Chris Coyle to put the 28f in the lead position and went on his way to his first Capitol Renegade United Racing Club sprint car win of 2017 at the annual Jack Gunn Memorial race paying $2,500 to win.

A field of 32 360 sprint cars singed into the Selinsgrove Speedway pit area on Saturday night all in search of the coveted Jack Gunn Memorial trophy and the $2,500 to win that goes with it. With 4 heat races on the docket for the night, heat race wins went to Adam Carberry aboard the family owned #47, Delaware native Chris Coyle aboard the Fred Kennedy, Fred’s Trailers #56, Robbie Stillwaggon aboard the Quality Auto Body #89 and the #28f Franek Auto Sales, Escape RV of Davie Franek. The B-Main was won by the #22 B&G Auto of Troy Betts.

Adam Carberry aboard the R&S Concrete, Paving and Site #47 and #56 of Chris Coyle lead the 26-car starting field to the drop green flag. Coyle quickly jumped out to the lead but a caution for a slowing #08 of Jason Clauss, again doubled up the field. On the restart, Coyle again jumped out to the lead in the Fred Kennedy owned #56 sprint car. By lap 7, the 28f of Franek was pressuring Coyle for the lead and just as Franek took the lead from Coyle, the caution came out for a stopped Justin Whittall in turns 3-4. The back bumper of the Pioneer Auto Body #67w of Whittall was missing and some damage to the tail tank of the 67w could be see as he was pushed back pit side.

On the restart, Coyle grabbed the lead heading into turns 1-2 but the lead was short lived as the 28f of Franek coming roaring back down the back stretch and into the lead as the field entered turn 4. Caution was again displayed on lap 13, this time for the 35 of Chad Layton and the M1 of Mark Smith who tangled in turns 1-2 while battling for the 5th position. With a considerable amount of time to clean u the mess in turns 1-2, the field came to a rest of turn 4 as the track was then opened for a fuel stop.

On the lap 13 restart, the Heffner Owned #27 of Greg Hodnett was right on the back bumper of Franek stalking the 28f and looking for the right opportunity to take command of the lead. At the drop of the green, both drivers battled for the lead but eventually the 28f of Franek held onto the lead. Lap #17 saw the #89 of Stillwaggon pass Curt Michael and Adam Carberry and head into the 4th running position.

With 5 laps to go Franek continued to pace the field followed by the #27 of Hodnett, with the 89 of Robbie Stillwaggon, the 56 of Chris Coyle and the #5g of Curt Michael rounding out the top 5. Just two laps later, Curt Michael over took Stillwaggon for 3rd but the leaders of Franek and Hodnett were just over a straight away ahead of Michael leaving him no time to track down the two leaders.
Franek cruised to his 2nd victory of 2017, his 2nd at Selinsgrove in 2017 and his 1st in the Capitol Renegade United Racing Club’s win for the 2017 racing season.

Some tidbits for the night. Newly wed Adam Carberry was back from his two-week honeymoon just in time for the race at Selinsgrove. Carberry was just married the Saturday before the URC opener at Bridgeport Speedway. Justin Whittall’s crew had to scramble to replace a tire prior to the start of the feature event as a tow truck ran over the youngster’s left rear tire. The #33 of Mike Walter, and #73b of Brett Michalski both took Provisionals on the night for Selinsgrove and the United Racing Club respectably. The night saw multiple green flips during the night at URC rookie Kris Lillick went for a ride on the backstretch, the 5c of Cory Thornton flipped in turns 3-4. Thornton was taken to the infield care area and was later released.