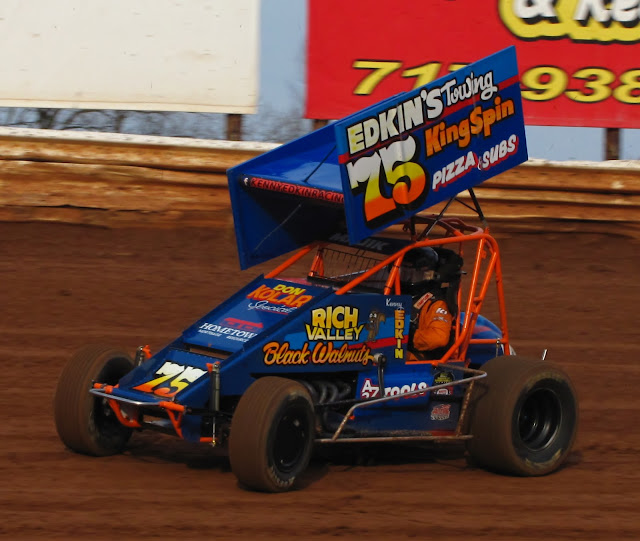 Edkin threw everything he had at leader Doug Dodson during the 25-lap Super Sportsman feature but a late race caution put the field in a double file restart and Edkin was able to make the race winning pass on the 24th lap for that first career win.

Veteran Rich Eichelberger led the first three laps before giving way to Dodson, who started alongside Eichelberger on the front row.

Dodson maintained the top spot during several yellows as Edkin, who started 11th had worked his way into contention and was running second with defending champion Russ Mitten brought out a yellow flag on lap 22 when his car suffered a blown motor.

This set up the thrilling finish that saw Edkin drive his Edkin’s Towing, Marysville MotorCars, Carlisle Auto Salvage, King Spin Pizza and Subs, Rich Valley Black Walnuts No. 75 to victory lane for the first time ever.

Charles Potts passed Steve Billet on the 10th lap and drove away from the field to post the win in the 25-lap Bernheisel Race Cars 358 Late Model feature.

Potts, who became the fourth different winner in four events, dedicated his win to his sister Victoria, who passed away two weeks ago.

Steve Billet and Whitaker won heats for the 14-car field.

Not to be outdone by his nephew, Mike Potts raced home with the win in the 20-lap Morgan Paving/Aqua Fun Pools Street Stock feature.

Updegraff and Emig were heat winners for the 12-car field.

There will also be a Test ‘N’ Tune on Wednesday night, April 19 from 6-9PM at the Speedway.