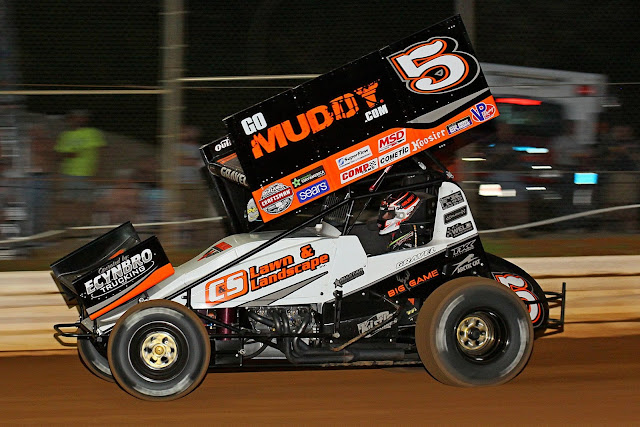 His seventh series win of the season, and second straight in Pennsylvania after winning Wednesday at Lincoln, was worth $8,000.

“I’m with a great team with great crew guys,” said Gravel, of Watertown, Conn. “We just keep getting better and better. I got lucky with the dash draw again. When it goes your way; it goes your way. I guess it’s our time right now. The last restart, I didn’t feel that great, and I screwed up on the last corner on the last lap and I’m sure (Schatz) got pretty close. I had just enough to hold on.”

After winning the dash, Gravel started on the pole and grabbed the race lead over Brad Sweet as Greg Hodnett and Daryn Pittman raced hard for third with Hodnett getting the spot. Schatz started fifth and passed Pittman as well and then swapped third with Hodnett on lap two.

Gravel extended his lead to about half a straightaway with 10 laps completed. He led by 1.3 seconds with 13 laps completed as he reached slower traffic.

This allowed Sweet to close as Gravel began to try the bottom groove to lap cars. Schatz drove by Hodnett and into third with seven laps to go and closed on the leaders.

They were having trouble passing the lapped cars and Schatz took advantage moving by Sweet and into second with four to go.

Jason Sides, who was lapped and in the middle of the leaders, ended up into the inside backstretch fence with four laps to go bringing out the caution flag. A single-file restart ensued.

Rahmer would drive by Sweet and into third on the restart as Schatz stayed right with Gravel. The caution flew again with three laps to go.

Gravel controlled the restart, but Schatz stayed within striking distance trying to make the bottom groove work as did Rahmer over the final laps. Gravel stayed on the cushion and had a miscue in turn four as Schatz closed even more finishing 0.380 behind Gravel. Rahmer finished a close third.

“You have to qualify good here,” said Gravel. “It’s huge. We did that tonight and keep putting ourselves in good positions.” “You’re not going to get him in open race track,” said Schatz. “We had to stay in traffic. That’s the way it goes some days. I had a great car. You have to make things happen off the cushion.”

“It means a lot to be able to race with these guys,” said Rahmer. “We put the whole night together. I’m pretty happy with this. We run our car to get faster at the end of the race. I needed to maintain early so I could get good at the end. I was really good in one and two. I just need to work on three and four for tomorrow night. “