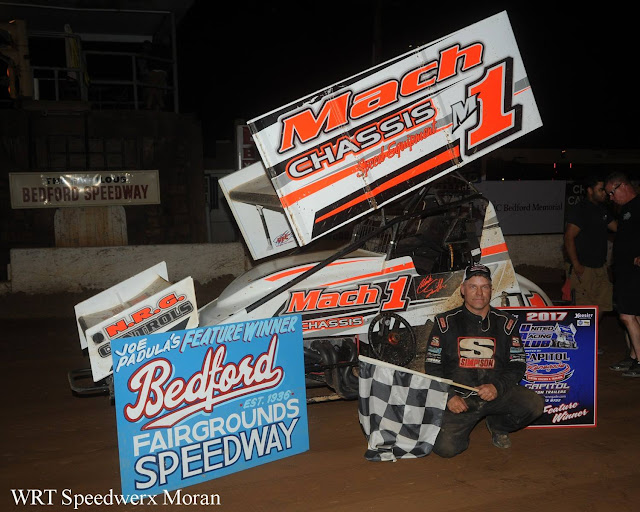 Anytime Mark Smith pulls into the track he is a contender and on Friday night Smith parked the Mach 1 Chassis M1 back in victory lane at the Bedford Speedway. With 27 Capitol Renegade United Racing Club Sprint Cars signed into the pit area, three heat races were needed to determine the starting lineup for the 25 lap feature event.

Heat race winners went to Bill Unglert aboard the Paw It Forward Foundation, Gorman Property Maintenance #33b, The Cobra Chuck Hebing aboard the Wilkins Recreational Vehicles, Northcoast Performance #45 and the 2016 URC Defending Champion Davie Franek aboard the Franek Auto Sales, Escape RV #28f. There was a B-Main scheduled but when track promotor Joe Padula decided to start 24 cars instead of 20 cars the B was no longer needed. Joe Padula and Bedford Speedway put up the extra money to start the 4 more cars. Padula reported that if the drivers and car owners were going to support him and Bedford Speedway, then he was going to support the drivers and car owners by starting 24 cars.

The 24-car starting field was brought to the green flag by the #56 of Chris Coyle and the 5G of Curt Michael. At the drop of the green, Coyle jumped out to the lead with 4th place starter Davie Franek trailing close behind. By lap 5, Coyle was still in the lead, but Mark Smith was now in 2nd place and stalking the #56 waiting for his move. On lap 7, with Coyle now heavily involved with lapped traffic, Smith saw his chance using a lapped car as a pick and taking over the top spot. Coyle was also passed by Franek as he tried desperately to maneuver through lapped traffic. A lap 8 caution brought the 28f of Franek to the back bumper of Smith, but on the restart Smith just pulled away going uncontested for the remaining 17 laps.

URC Tidbits: Son of Series Sponsor Wayne Quackenbush, David Quackenbush made his first Capitol Renegade United Racing Club start of 2017. David finished in the 18th position. A heat race tangle resulted in URC front runner Josh Weller loading up early. After contact with Colby Womer, Weller hit the wall hard exiting turn 2 resulting in a bent chassis. Jimmy Stitzel put the #4 on the trailer after hot laps due to little to no oil pressure. With the 358’s not running anywhere, multiple 358 teams made the tow west to Bedford, #00 Chris Franks, #90 Jordan Givler, and #13 Ryan Higgins were all on hand.

The Capitol Renegade United Racing Club will now take off their wings and head to Path Valley Speedway on Sunday night May 21st. The next winged race will be next Saturday night at Selinsgrove Speedway.