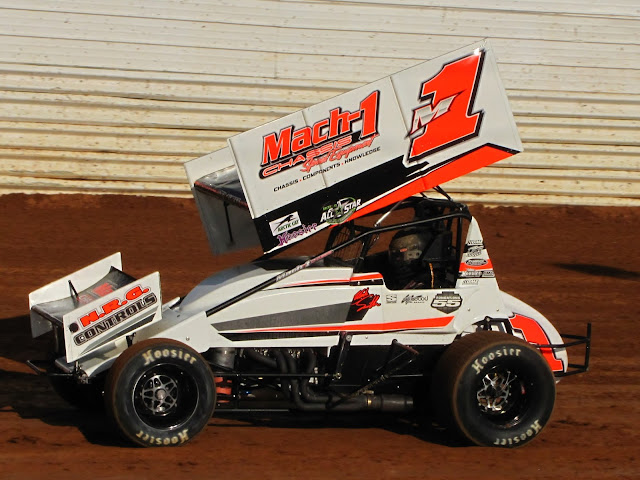 Port Royal – Former track champion Mark Smith of Sunbury wired the field for the 25-lap 410 sprint car win at Port Royal Speedway on Saturday night, taking $3,200 for the 33rd win of his career at the track.

The win marked the end of an eight-year absence for Smith from 410-sprint victory lane at the oval.

Rick Singleton of Huntingdon took the win in the 22-lap super late model main after being the benefactor of the leader’s misfortune twice in the event.

In the econo late model main it was Andrew Shoop scoring his first ever win in the division while Dave Grube took his first career win in 305-sprint action at the track.

Smith’s run to the win in the 410-sprint main saw him enter lapped traffic on the eighth lap with Steve Buckwalter in tow from the fourth starting spot.

Eighth starter Dave Blaney blasted into fourth on the first circuit but would get no higher in the running order, instead slipping backward as the race continued.

Smith worked with the lead as sixth starter Rick Lafferty eventually came to third with 17th starter Greg Hodnett on his heels.

Buckwalter was able to challenge Smith for the lead during the mid-stages but Smith was strong enough to stay out front, choosing his lines through traffic carefully to preserve control.

The race nearly went non-stop until a lone yellow flag unfurled for a stopped Chad Trout as the field was headed to the checkers on the final lap.

The final lap restart proved uneventful with Smith ending up taking the win by .864 seconds over Buckwalter with Lafferty third followed by Hodnett and Tyler Bear.

Bear gave up third to both Lafferty and then Hodnett with four laps to go.

The super late model main was a harrowing affair with no less than seven caution flags and three leaders, two of which fell out of the top spot.

When the race began, polesitter Matt Parks got crossed up in front of the field in the first turn, nearly collecting Tim Smith Jr. while third starter Andy Haus blasted by on the inside lane to take command.

Haus was running away with the lead on the fourth tour when he slammed into the outside first turn wall to bring out the first of the numerous cautions.

Meanwhile, after starting 16th in the field, Chad Hollenbeck was working the pack and was scored sixth on a lap six restart and ensuing restarts worked in his favor to make sweeping outside passes in order to blast to the front.

On the 11th tour, Hollenbeck worked the outside lane beautifully to make a two-car pass of both Smith and Singleton to take the lead and never look back.

Hollenbeck withstood restarts just after completing the 11th lap and again on lap 15 with no issues but then when another yellow flag appeared for a stopped Mike Lupfer with four laps to go, Hollenbeck withdrew from the event, again handing Singleton control of the event.

And this time Singleton would not again relinquish control even with a final restart on lap 19 and a final lap challenge by Smith.

Singleton took third win of his career at the track by .117 seconds ahead of Smith, followed by Matt Parks, Austin Berry and Dylan Yoder.

Rine set a new one-lap and eight-lap track record in the second heat race, setting a new single lap mark of 17.470 seconds and a new eight-lap mark of 2:22.094.

Andrew Shoop took the lead from JR Toner on a lap six restart to speed to his first career checkers in the division at the track.

Eric Irvin drove into second for the finish followed by Tim Fedder, Todd Snook and Toner.

Heats went to Fedder and Krape. 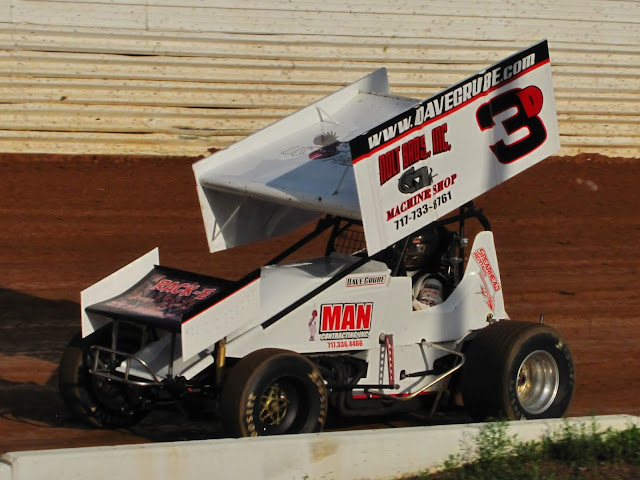 Drew Ritchey led the first lap of the 305-sprint main before Jeff Miller took over.

However Miller’s night would end abruptly three laps shy of the finish when he slammed the outside second turn wall after opening up a huge lead in what was a foggy feature event.

Miller’s calamity with the wall handed the lead to Grube who went on to win over Tyler Reeser, Ritchey, Ron Aurand and Cale Reigle.

Stay up to date with all Port Royal news and information by visiting the oval’s official website at www.portroyalspeedway.com or by following the track on Facebook or Twitter.