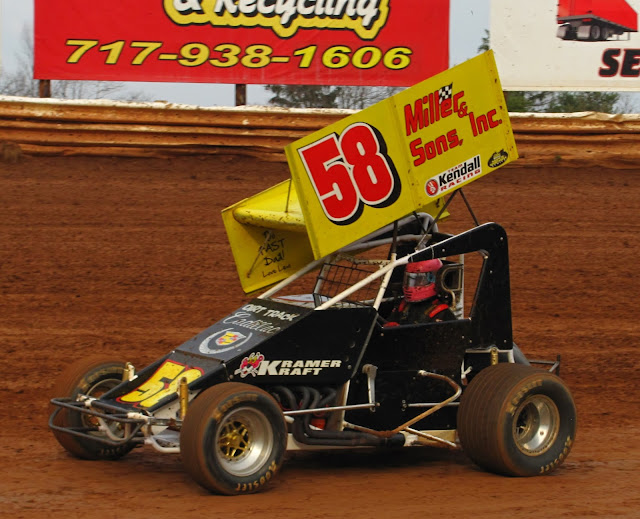 Starting deep in the field in the 18th starting spot, Miller’s charge to the front was impressive as he took the lead with ten laps complete and then held off a feisty Kenny Edkin before securing the win.

Following two yellows before a lap could be completed, Devin Beidel led the first six laps before giving way to Tom Wyckoff who led laps seven and eight.

Beidel went back out front on the ninth lap but Miller drove by for the race lead, a lead he would never relinquish but had to fend off the challenges of Edkin, the feature winner the last time the Super Sportsman were in action.

Miller became the fourth different winner in as many races this season.

Brown would never look back as he became the third different winner in as many 305 Sprint mains this season at the track.

The race was red flagged on the third lap for a violent series of flips on the front stretch by Trevor Kobylarz. He was not injured.

Arndt and Kunsman won heats for the 13 cars.

Continuing his domination over the division this year, defending track champion Alex Updegraff took the win in the Extreme Stock 50 lapper.

Updegraff started third and went out front with ten laps in the books and went onto dominate the remainder of the event for his fourth win of the season. He was followed by Jeff Gill, Michael Smith, Donnie Broderick and Jeff Waltz.

Heats for the 12 cars were won by Patrick McClane and Don Murphy.

There will also be a Test ‘N’ Tune on Wednesday night, May 24 from 6-9PM at the Speedway.